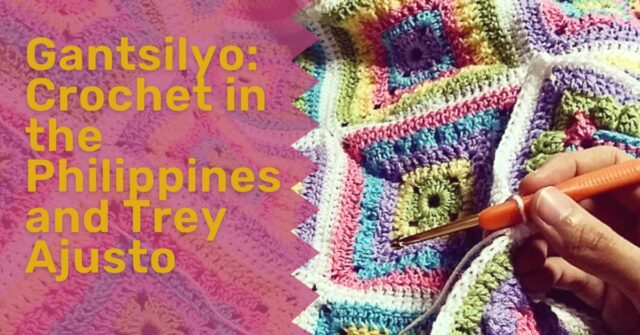 Crochet is a craft that people practice all around the world. However, we hear about it more from some places than others.

Here’s what Trey had to say:

“I’m a crocheter in the Philippines. Although crochet is a known tradition here, it hasn’t really reached a “popular” status. I can say now, though, that it’s catching up with the world. There’s a newfound love for it, especially among the young (because there’s still a (mis)perception back here that only grandmas crochet).”

I love my grandmother as much as anyone, but I think that the work Trey is doing is anything but antiquated! For example, take a look at the crocheted bouquet below.

Trey also said something about her own interest in sharing Filippino crochet that I loved and wanted to share:

“It is my goal to put crochet in the limelight because there’s talent out there in our country that doesn’t get much exposure, especially among those who crochet in the provinces.”

Trey Ajusto has a blog called Gantsilyo Guru. She explains: The word “gantsilyo” is the Filipino term for crochet derived from the Spanish crochet word “ganchillo.” Learn how to say crochet in 25 languages here.)

Trey learned to crochet during high school. She explains:

“My very first crochet project was in home economics class. It was a 3-D Christmas tree. Our teacher didn’t want to accept my project because she couldn’t believe I made it. Since then, I’ve been hooked!”

Big props to Trey for having her crochet earrings included in the Philippines edition of Cosmopolitan magazine this past December.

She also had her work featured in the 2012 planner for The Coffee Bean & Tea Leaf company; you can see the free crochet pattern for that coffee cup cozy here.

Trey also teaches crochet/amigurumi workshops. Below is a photo from her Instagram that shows her sharing her knowledge in a workshop.

Trey also launched her own “Gantsilyo Guru” line of yarns, which are just gorgeous. She began with pop-up shops and opened her own physical location (with online sales too!) for yarn, hooks and needles, accessories, and patterns.

More Thoughts on Crochet in the Philippines

Trey’s blog offered some helpful insight into crochet in the Philippines.

Of course, Filipino crocheters make scarves. Trey says: “Even though it’s practically unwearable in the Philippines (except maybe in the Benguet province or when it gets windy and cold during the “ber” months), a scarf can be your legit claim to crocheting prowess.”

In fact, you can see below a lovely lightweight pink scarf that Trey made.

The yarn store that Trey recommends in Manila is Dreams Yarnshoppe. She has reviewed and mentioned other Philippines yarn stores on the blog as well, though.

Men aren’t visibly crocheting in the Philippines. Trey says: “I haven’t met a man (yet) in the Philippines who crochets. I’m sure they’re out there somewhere crocheting.” She also says: “In my opinion, if a man is confident enough to hold a yarn and a hook and have the desire to create, then he is a real man!”

That’s why we celebrate male crocheters right? I will add, though, that the one main Philippines-based crocheter that I know of is actually a man: Pablo Cabahug.

Trey also helps support the online presence of Philippines crocheters by sharing links to those folks who are on places like Ravelry.

Other Crocheters in the Philippines

Some of the other crocheters in the Philippines that I’ve found through online research include:

It’s safe to say that crochet is thriving in the Philippines! For further inspiration, check out this video interview with Trey.

11 thoughts on “Gantsilyo: Crochet in the Philippines and Trey Ajusto”