I’m working my way through the list to complete my Designer Crochet Project, in which I take a look at the career of 50 famous fashion designers and see what crochet they’ve created or inspired. This week we’ll look at Ralph Lauren.

, I learn first that Ralph Lauren is known for making “fashion for people who actually don’t want to be fashionable”, which jives with the casual style I think of when I think of his brand. It goes on to say that he offered a new style that is considered the American Style of fashion (what we now call sportswear).

The designer, born in New York under 1939 with the given name of Ralph Lifschitz, started his fashion foray as a teenager by working in menswear shops. In 1967 he launched his first line – uniquely, a line of neckties. The neckties were quite successful so he was able to follow them the next year with his first men’s collection. He quickly won the COTY Award for his menswear line. Just three years after his menswear launch, he launched his first women’s collection. 10 years later (we’re up to 1981 in case you’re counting), Ralph Lauren became the first American fashion designer to open a flagship store in Europe. This designer is worth billions of dollars and ranks among one of the richest men in the world, which is impressive considering that he came from modest immigrant roots.

Of course, the thing that he’s most well known for is the polo shirt with the Ralph Lauren symbol on it. The first one came out in 1972 and they are still made in new styles today. But yes, there is some crochet that this designer and his fashion house have put out over the years! In fact, there are more than 40 women’s garments labeled crochet in the online store right now, not to mention some items for children and the home, but I should note that at least a few of these look like they are crochet-inspired but not actually hand crocheted. 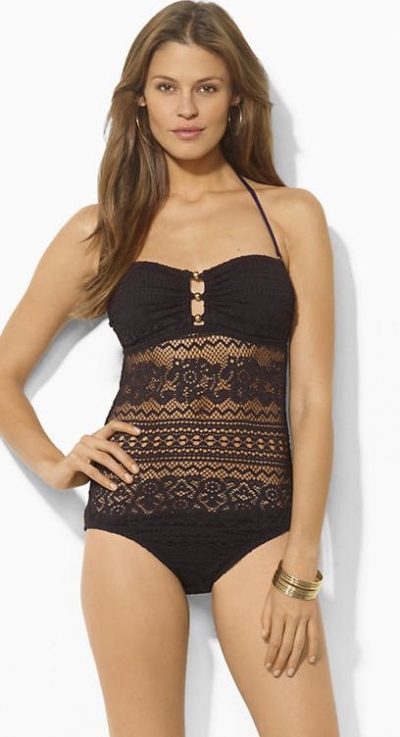 Ralph Lauren drew inspiration from Spain for his Spring 2013 collection. It’s tough to tell but reports indicate this red dress is crochet.

This Ralph Lauren 2011 dress looks like it may be lace crochet – what do you think?

Crochet at the Ralph Lauren Store

Did you know that awesome amigurumi designer Planet June had her crochet bats featured in the Manhattan window storefront of Ralph Lauren last year?