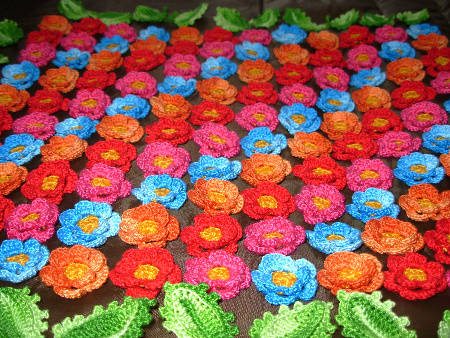 About a year ago I shared a post on this blog about The World’s Largest Crochet Garden. Every now and then I see references to this garden as well as mentions of other crochet gardens, but I’ve never actually taken the time to look up what these yarn gardens look like … until now … 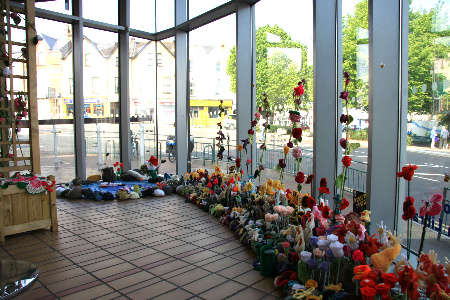 This is a project called Blooming Marvellous. Their blog explains that this is “an intergenerational community knitting/crochet project, made by over 2000 volunteers, culminating in a knitted/crocheted 3D garden which climbed, creeped and blossomed over three floors of Bourenmouth Library” in the first installation last year. More than 30,000 people came to see it there. The garden is no longer at that library but is actually on tour in different locations around the UK. It is currently at the Bodelwyddan Castle Museum in North Wales and then in July it will move to the Bankfield Museum in North Wales. There are lots of great photos of this indoor garden over at Attic 24. 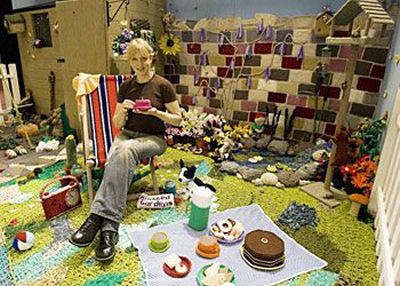 I’m actually not sure if this one is knit or crochet (it’s been called the crochet lawn) or a combination of both (like Blooming Marvellous is). But it’s cute! Artist Jane Bolsover got the idea that she wanted to create a life sized garden made of yarn and she got about 300 people to help her out. This is another UK project.

There is a project happening right now in the US that is similar to these UK ideas. It’s called The Yarn Garden. It is an installation art piece by Catherine Reed that is going on display in Ukiah on June 1st. Like the others, it’s a collaborative project worked on by volunteers who have created a display that “includes a gazebo covered with yarn flowers and leaves, with yarn grass and low seating inside, approached by a yarn path.” I can’t wait to see photos of this one! 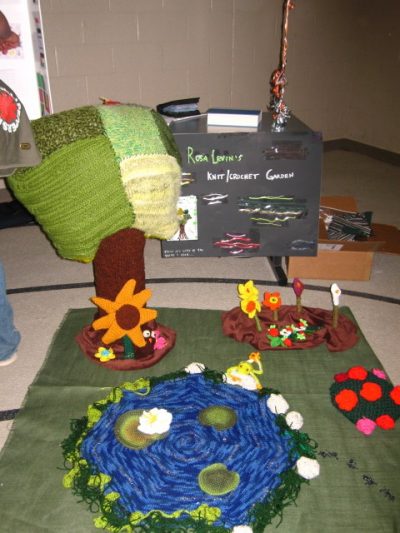 This knit and crochet garden, which I discovered thanks to the Craftster forums, was done as a senior project. It’s primarily crocheted although the tree is knit. I love the lily pond! 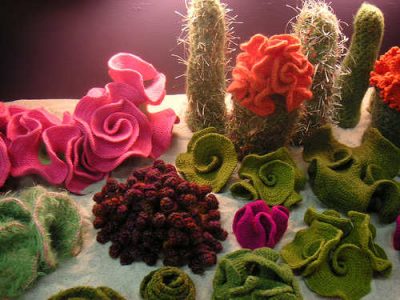 One of the satellite projects of the Hyperbolic Crochet Coral Reef Project was a crocheted cactus garden. @craft shows it here paired with a kelp garden for a display that the Institute for Figuring did at the LA Fair about five years ago. Did you see that the IFF has just opened its own permanent display space for exhibits like this one? 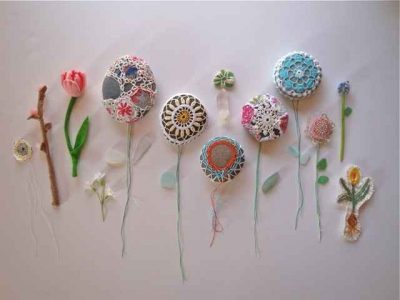 Rock garden. I found the image via McKean Studio but I’m pretty sure the artist is Margaret Oomen, otherwise known as Knitalatte on Etsy.

When I was a little kid I collected rocks. I found the prettiest rocks in my area and saved them. I took the ugly ones and painted them and saved those too. My mom would sometimes take us to “the rock store”  (which looking back must have been some kind of gem shop) where we could pick out truly gorgeous things like Tiger’s Eye rocks. I’d put them all into an organized egg carton system I’d created. So I have a special place in my heart for the idea of a rock garden and I absolutely think it can be beautifully done by adding crochet. 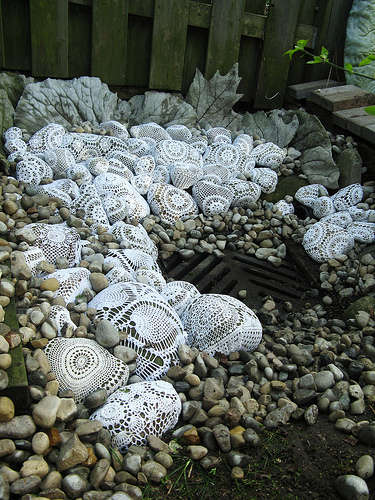 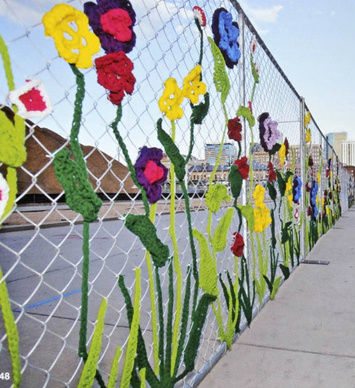 The Ladies Fancywork Society put their twist on a crocheted garden when they yarnbombed a chain link fence to bring a version of nature to an urban landscape. 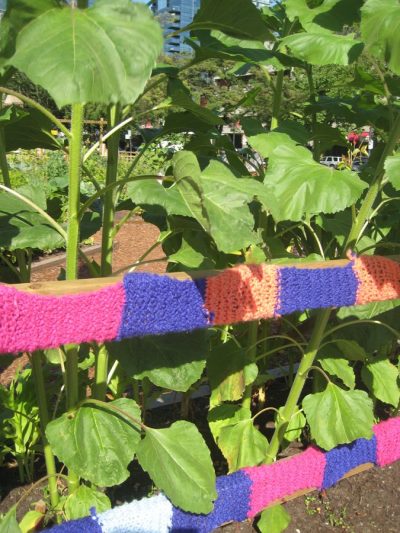 Another way to bring together crochet and gardening is to yarnbomb around an existing garden. That’s what we see here at Vancouver’s Davie Village Community Garden. See more photos at Magpie and Cake. 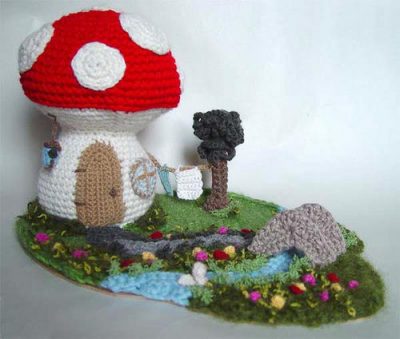 Another option is to crochet a small detailed garden. Sandy Meeks has some great examples of this. My favorite is this one, a mushroom house with a lovely little garden attached to it.

Feeling inspired by some of these images and ideas? Perhaps you want to create your own crochet garden but don’t know where to start. I’d suggest starting with a small indoor garden. There are two ways to get this started … First, you could create a small indoor garden (such as an herb garden) and then use crochet to accent it. For example, take a look at how @jkundhi brought some of her outdoor garden inside and then crocheted a jar cozy in natural colors to add to it:

Another option is to create an indoor garden entirely of crochet. An example to get you started would be these beautiful crochet flowers in a vase over at Adventuring Home: 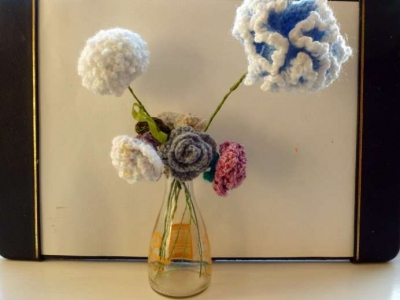 You can start with something small like this and then grow your garden, planning it out just like you might a regular garden! There’s a great article on this idea over at Crochet Insider called Cultivating Your Crochet Garden. If you want some patterns for crocheting garden elements, I’d recommend the books 100 Flowers to Knit and Crochet and Crochet Bouquet to get you started. And of course another great choice would be Suzann Thompson’s Crochet Garden

I’m curious … do any of you garden? I have a terrible brown thumb but my little sister is excellent with gardening.

4 thoughts on “Inspiring Crochet Gardens: Projects and Ideas for the Home”