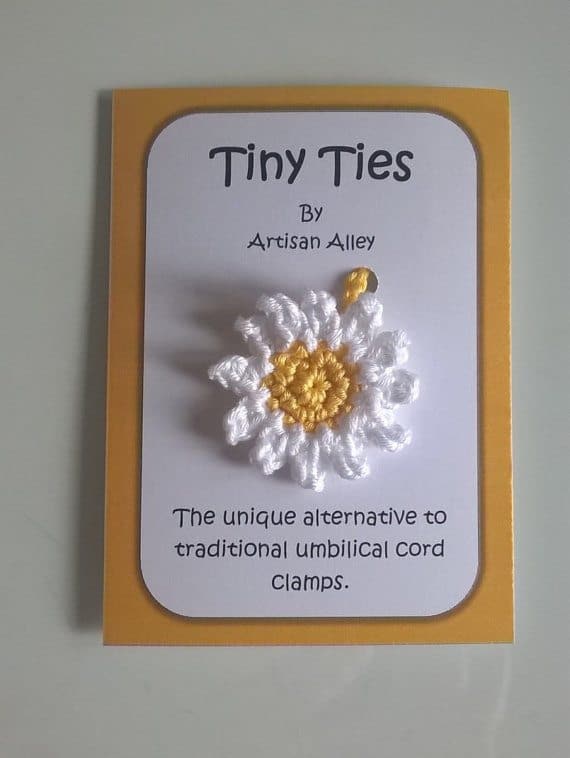 News reports have been warning against the use of DIY umbilical cord ties, including crochet cord ties, because of the possible risk of infection to the baby. However, midwives and others say that crochet and knit umbilical ties can be safe and provide an eco-friendly, baby-skin-friendly alternative to the plastic clamps typically used in hospitals. 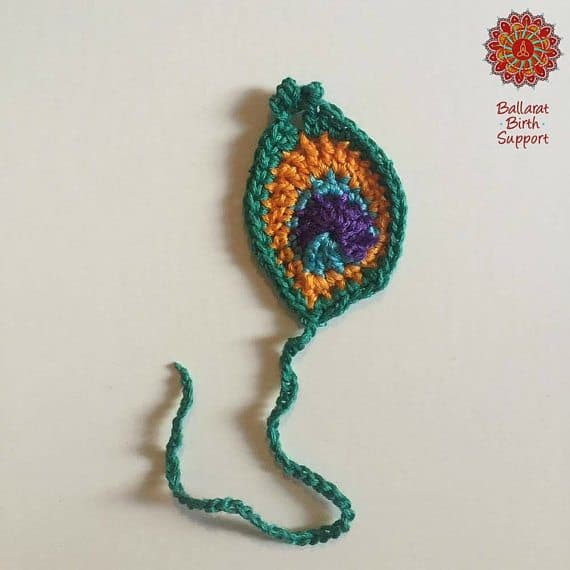 What Are Crochet Umbilical Cord Ties?

A baby’s umbilical cord needs to be tied off with a clamp or cord that stays on the baby for approximately one week. Most hospitals use plastic clamps. However, there has been a trend in recent years towards umbilical cord tie alternatives including DIY fabric and yarn cord ties. One cord is tied near mama, one closer to baby and the cord is cut between the two ties, with the latter remaining on the cord. 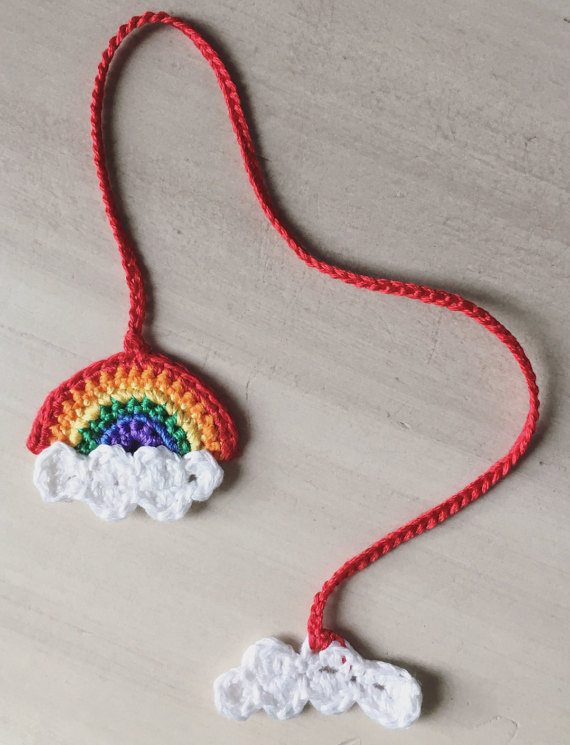 There are several reasons that mothers may opt for a soft, fabric alternative to the plastic clamps. These reasons include: 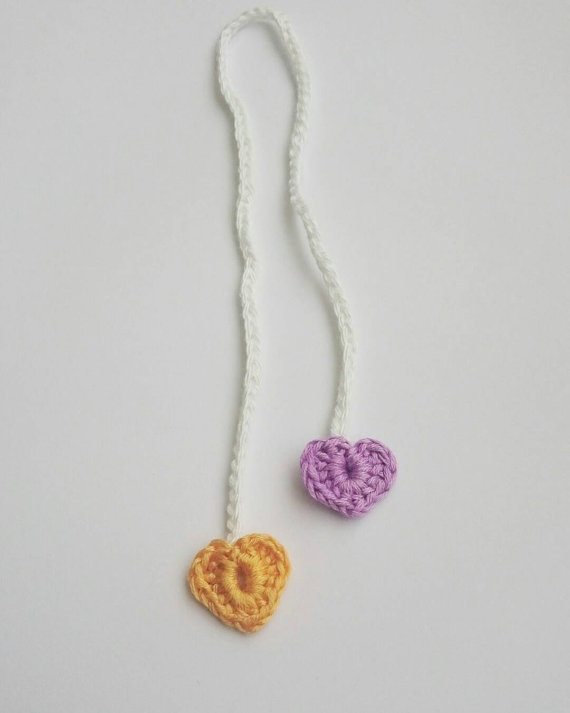 Emma, the blogger at natural parenting blog Part of Me, shared her DIY umbilical cord ties tutorial. In this post, she also shares her story about why she chose to use this option, saying in part,

“The result was much more attractive than the plastic clips that most of us are used to. It looked quite pretty, more personalised and definitely didn’t get in the way like plastic ones do when you’re trying to clean baby and fasten a nappy around it. It must have been more comfortable for baby too.” 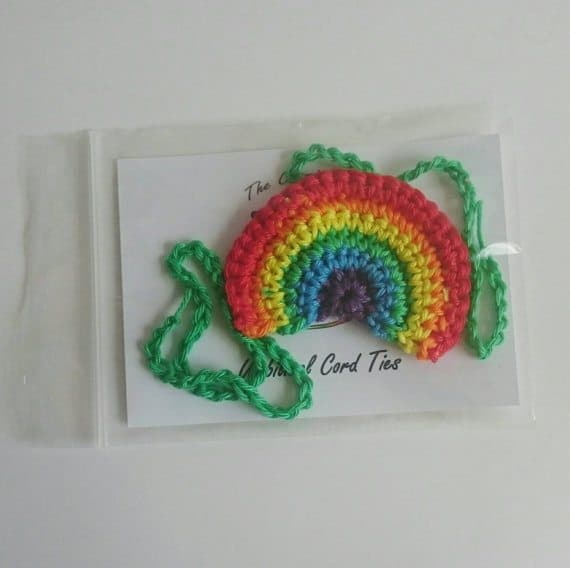 Members of the medical community have come out recently discouraging moms from using handmade umbilical cord ties. The main reason cited is the potential for infection from these ties. Emma addresses this issue in part in her article on Part of Me, writing,

“When I’d finished making them, I boiled them for a few minutes and then put in a sandwich bag in the freezer until it was time to use them. This process sterilises them.” An additional blog comment there elaborates on this.

In an article on the issue from The Courier-Mail, writer Jackie Sinnerton quotes an Australian doctor as saying,

“My concern with a crocheted or knitted wool device is the potential for infection as they can easily get wet as they become covered in faeces and urine.”

However, she also includes a balanced response from midwife Emma Nolan who “believes infection is unlikely as most parents keep the decorative part outside of the nappy.” The practice of  using DIY cord ties is particularly common among those who use midwives, with this article citing that “Private midwives are reporting 80 per cent of women are bringing their own DIY cord clamps to the birth and babies will usually wear them for a week or until the cord stump is fully healed.” 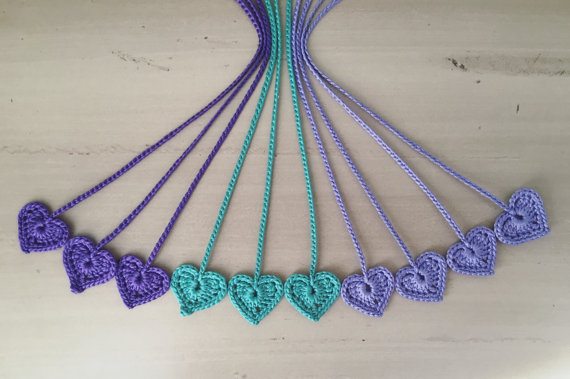 How to Crochet Umbilical Cord Ties

Docmaggoo writing in the Cloth Nappy Tree forum suggests one easy option for making crochet umbilical cord ties. You basically make a single crochet chain using worsted weight cotton yarn. The length suggested in various forums is approximately 8″ although this varies. This would be a really simple version but you could also add some small appliqués to make a more decorative crochet cord tie, as seen in some of the examples throughout this article, which are all finished items sold on Etsy. The sellers featured here also offer many other styles and designs.

The Bodywise Birthwise Store sells crochet heart umbilical cord ties by Peachtree Crochet Co. and on their page it also says,  “Each tie has been crocheted using a very small hook. This helps keep the designs small but also the stitches tight, to ensure it’s strong enough to withstand being tied in a knot.” 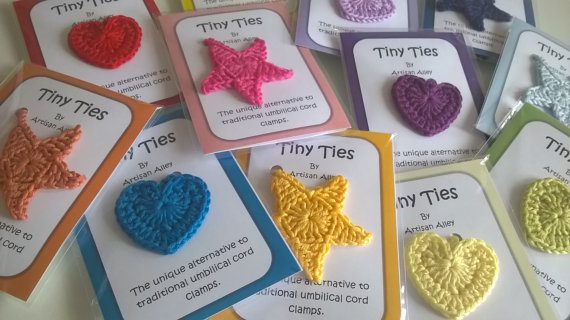 Crochet ties for umbilical cords from ArtisanAlley on Etsy