Today I wanted to share one of the stories from Crochet Saved My Life along with some additional information about the charity work being done by the woman who shared this story with me.

It was a normal day. Vicki was sitting at a red light with her daughter, waiting for her turn to cross the intersection. Suddenly, a crash came from behind. A kid from her daughter’s school barreled into their parked car at nearly fifty miles per hour. The car pitched back and forth, resulting in life-changing spinal injuries for Vicki. She has two spinal fusions and she lives in severe, constant pain. In spite of this, Vicki maintains a positive attitude, due in part to the healing benefits she’s experienced through crochet.

Vicki explains that her take on the situation is that it could have been a lot worse. She and her daughter survived the accident. She could have been killed, but she wasn’t, and Vicki sees this as a second chance on life. She doesn’t want to be someone who takes that for granted by whining and feeling sorry for herself. Of course, it’s tough to live in constant pain and never get down about it, so Vicki uses her crochet as a tool to keep her mind in the positive place that she wants it to be.

Vicki says that crochet helps her in many ways. First of all, it helps her to relax, which is important when dealing with chronic pain since stress can exacerbate the experience of pain. Second, crochet helps Vicki to feel useful and productive in her life. Chronic pain can make people feel helpless so it’s important to the healing process to be able to feel useful and crochet is a way that Vicki can give back.

Vicki crochets many items that she then donates to charity. Her favorite charity crochet work is making hats for people who have gone through brain trauma and surgery. There are many options to donate crocheted chemo caps to people dealing with cancer but Vicki points out that there aren’t nearly as many focused on brain injuries. The spine and brain are closely linked so in a way Vicki is helping people like herself and that is healing for her as well.

Vicki also uses her skills in crochet to respond to situations in the community that would make anyone feel helpless. For example, when the Lakewood 4 were murdered, Vicki banded together with several other crocheters to make afghans for each of the families who lost someone to the tragedy. Similarly, when local deputies have been shot and wounded (sometimes fatally), Vicki and her group have reached out to comfort them with crocheted comfortghans. This type of charity work is a way to take control over situations and respond in a positive way, showing not only empathy for others but restoring some balance to the spectrum of good and evil.

This comes full circle as a way for Vicki to heal from her own chronic pain. She actually learned to crochet at a young age. Her third grade teacher taught her during recess and she has been crocheting ever since. In fact, one of the things that really worried her after the accident was that she might not be able to crochet anymore because of the physical effects of the whiplash. Vicki did undergo physical therapy to help with her injuries, though, and one of the first things that she crocheted was a baby dress and bonnet for her pregnant physical therapist

Vicki has a tough time because she feels like her body is broken now. It hurts and it doesn’t work the way that it’s supposed to. She used to be able to skin, hikea and run marathons and now she can’t. However, crochet takes her mind off of that. She says:

“When I crochet I don’t think about how my body is now broken; I think about how I can create something beautiful and useful with my hook and either yarn or thread. I think the most healing part of crochet for me is I am able to take something simple, such as a skein of yarn, and turn it into something beautiful and useful. Crochet has turned my life around. I can’t hike anymore but crochet can take me places.”

So Vicki is able to make something useful and then give it to others who might need it, which is a really powerful part of healing for people in chronic pain. Vicki also helps others by teaching them to crochet. She recently passed along her skills to her son’s girlfriend by teaching her how to make fingerless gloves. This sense of connection that comes from sharing her knowledge strengthens the feeling that she has a purpose in this life even if her body sometimes wants to resist. Vicki is also able to use the online world to connect with others, some of whom she’s gone on to meet in real life

Finally, Vicki also designs her own crochet patterns. She likes the way that this channels her energy into something positive and creative. She says that this is yet another way that she can give back to the world instead of feeling like she’s just taking from it. And she adds, “crochet lets me be me”.

You can visit Vicki on her blog at http://www.crochetqueenheavensent.blogspot.com.

Vicki crochet hats for brain trauma and she encourages others to give back to those in need in this way. More information is available from Vicki or from Keesha who runs the program here. Because she has experienced the value of crochet in her own healing, Vicki is happy to help others learn to crochet. She is open to teaching anyone in her area who would like to learn our craft. 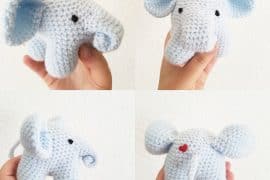