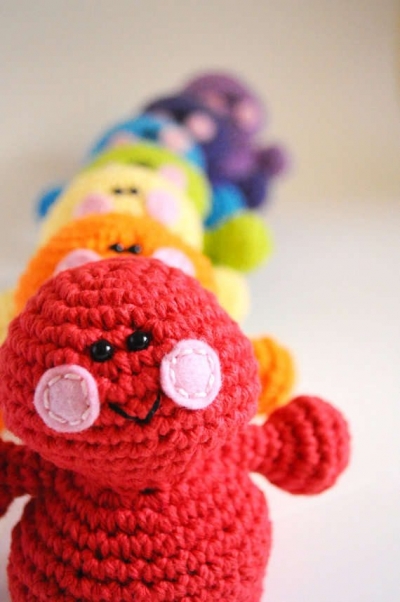 I profiled the work of amigurumi artist Vanessa Chan. I loved her crochet creatures but more than that I loved the artistry of her super unique posing of those creatures for photos. Something new now in her Etsy Shop is that she’s selling crochet patterns and DIY crochet kits so that you can make what she makes. 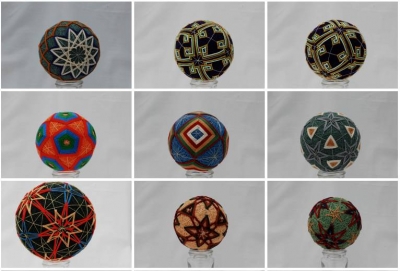 I shared the work of Carolyn Yackel who combines math and crochet to create art. This photo is of her math-based Temari Balls (which are embroidery, not crochet, but definitely interesting). She showed these at the Bridges 2012 Math Art exhibit. I mentioned Yackel again recently because I was reminded a little of her work when doing my piece on artist Sophie Buckley. 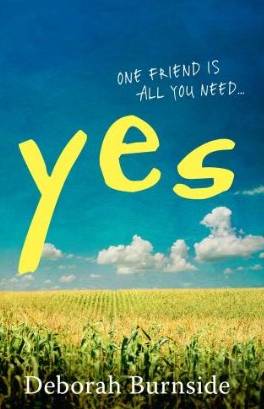 A new novel named Yes! had just come out, which is about two teen boys who start a crochet business. Unfortunately, I still haven’t been able to get my hands on a copy of this book so I don’t know how good it is. It has only received two Amazon reviews; a one-star and a four-star so that’s not very helpful. Has anyone read this crochet novel? 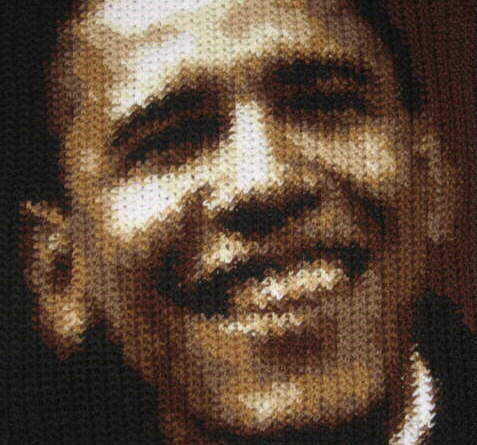 President Obama received crocheted silver beanies from an attendee of the wreath-laying ceremonial for Bombing of Darwin Day in Australia. 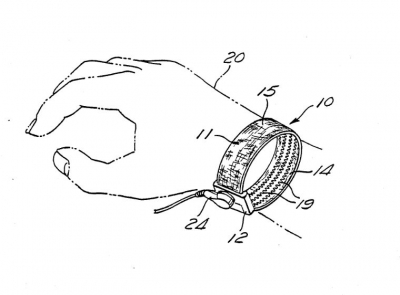 High tech grounding wristbands made with some crochet hit the market, something that was patented back in 1989 where it is described as “a crocheted fabric is formed of electrically insulating elastic yarn interlocked to a wefting yarn by a warping yarn.” 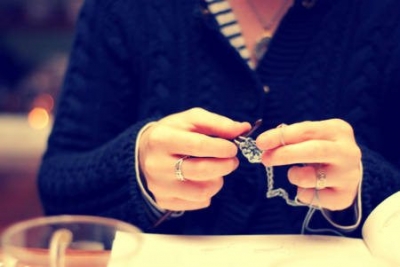 Crocheter Frances E. Collins Pease Hall was honored for her longevity as the oldest person in her town.

Ruth W. Umberger won an award for her crochet in the seniors category offered for the first time at her local fair.

I profiled Alexander McQueen’s crochet as the first designer in my Designer Crochet Series project. I do not see any crochet in the current McQueen collection but I’m keeping my eye out. 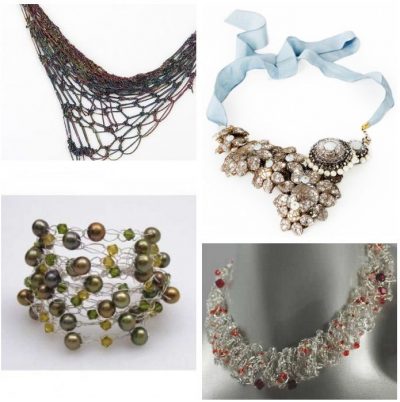 7 Luxury Crochet Jewelry Items for Your Christmas Wish List; this one deserves an update post of its own which I’ll be doing later this month.

Linda of ElevenHandmade was trying to launch a crochet project called Crochet on the Street showcasing Latvian crochet spotted on people and sharing with a Twitter hashtag. From what I can tell this project unfortunately never took off (which happens to the best of us!) but Linda is now doing something else really cool – researching aids to reduce hand pain in crocheters.

“The nineteenth century was a century of innovation. The arts, manufacturing, and trade flourished; dazzling new machines, inventions, and curiosities seemed to appear on the market every month. It was a time of fascination with science and technology, and the Victorians in particular tirelessly designed, improved, and experimented with devices that could make in a day what previously had taken months to complete by hand. It was inevitable that they would turn their unbridled energy, ingenuity, and talent to modernizing handmade needlecrafts.” – Irina Stepanova

“If you LOVE doing crafts or art, stop worrying about what others think, or that it has to be some masterpiece, or the need to justify it by proving its worth in dollars. Something much more valuable is afoot: your wellbeing.” – Jafabrit

“There’s something incredibly nice about knowing that I’m crocheting lace with my grandmother’s steel crochet hook.” – Zen of Making

“I love colour, that’s no secret,  I love being immersed in the bright and vibrant energies that colours create, the way each colour has a different vibration that stimulates a different response from me.” – Crochet with Raymond 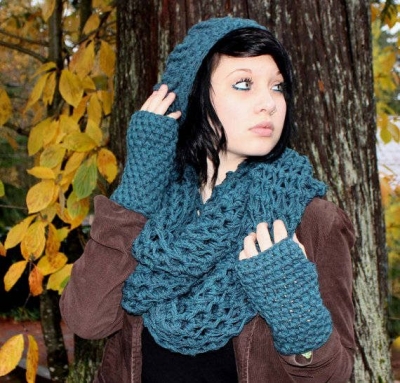 I was loving a hooded crochet cowl from BessetteArt. I’m now loving this seller’s full matching set of crochet hat, cowl and fingerless gloves in my favorite color of teal. 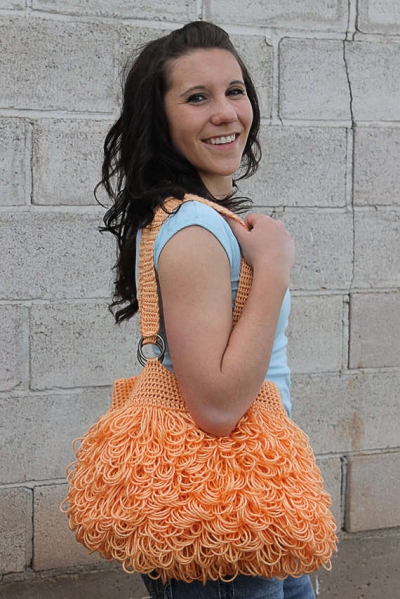 I was also loving a terrific crochet statement purse from Etsy’s livinginamethyst who sells the crochet pattern for the purse featured last year as well as this one shown here. 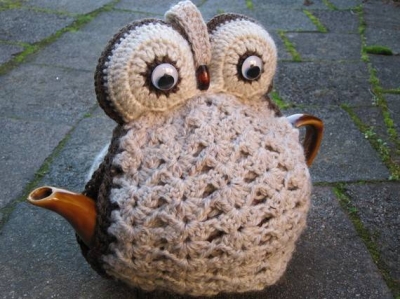 I compiled an Etsy Treasury called Crochet for a Sick Day, which I described as: “You’re stuck in bed with a killer cold. What do you need? A hot mug of tea, a cozy blanket, a good book to start. Here’s a collection of must-have crochet items for your sick day.” The vintage owl tea cozy by shazzasknits was my favorite item in the collection.

I reviewed Lion Brand’s Wool-Ease Worsted Weight Yarn, which is “is a soft yarn thanks to the high-acrylic content and the plush weight of the yarn”. I was recently reminded of this yarn when Lion Brand did a terrific roundup of a bunch of their different wool yarns. 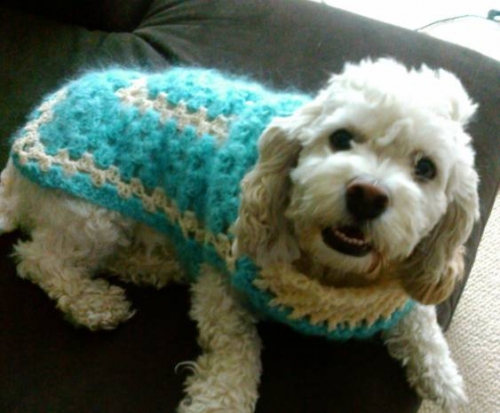 I crocheted the first doggie sweater I ever made for Betty, my friend’s cockapoo. Later I made her another. And my mom has crocheted for Betty too. 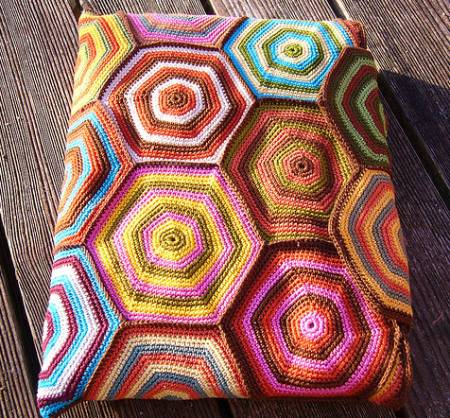 I crocheted some hexi motif bags that were a departure from a pattern I was working on for Year of Projects; the pattern was Phazelia’s Laptop bag pictured above.

I was exploring the blogroll links in various blogs for my Hooked Together Project. One of the crochet blogs I learned about at this time that I still follow was Life and Yarn or Yarn and Life. 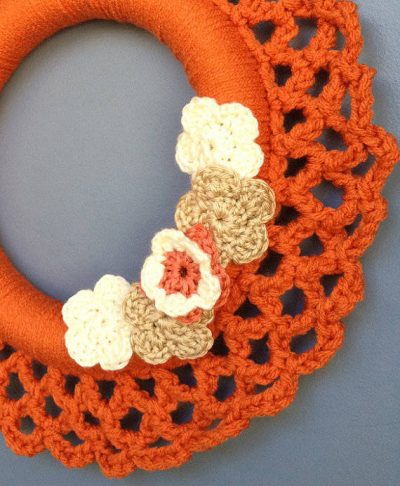 And finally I shared my reasons to be thankful for crochet, which is something I’ll be doing again anew this coming Thanksgiving day.

I looked up this date in crochet history and found that in 1952 there was a newspaper advertising crochet patterns for sale to learn to make Goldilocks and the 3 Bears. I found this interesting because most of the crochet patterns I’ve seen from this time were for doilies and home decor and wearables but not for stuffed animals. I also can’t help but notice the difference between crochet pattern advertised for sale then vs. now in terms of the image (drawing then vs. great photography now) and how much more information we have now to determine if we want to purchase a crochet pattern!