Every Monday here on Crochet Concupiscence I do a post about a crochet artist that I’m adoring or curious about or have just recently discovered. I have wanted for months to do a post on Xenobia Bailey but every time I sat down to do it I have to say that I felt a little bit daunted. I just love her work so much. I want my post to do it justice. And while in general I think my crochet artist posts do their job of sharing and supporting the work of other crochet artists, writing about someone whose work I love as much as hers is a little like trying to write a thank you letter to a mentor – you can’t ever quite same enough or say it right. Still, I do want to share her work here, so I’m forging ahead with this post and hoping that you’ll like Bailey’s work as much as I do!

What drew me to Xenobia Bailey’s crochet art 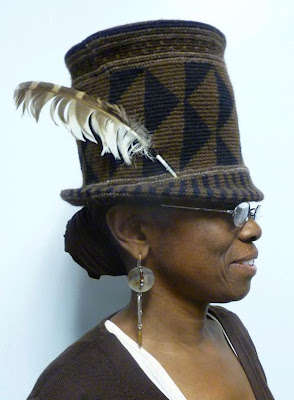 I first learned about Bailey’s crochet artwork from the book Yarn Bombing: The Art of Crochet and Knit Graffiti. The book includes many terrific photos of inspiring crochet art that isn’t necessarily true yarnbombing and Bailey’s art was among those great photos. What caught my attention about her work immediately was this underlying power that I sensed in the work. This is difficult to explain but I’ve been re-reading Twyla Tharp’s book on creativity

lately and she mentions the concept of group memory in creativity. Bear with me for a minute here. This psychological idea is basically that we have an ancestral memory that is held deep within us, pre-language, and we sense it sometimes when we see images that hold the power and energy and meaning of the past. Tharp mentions it in relation to seeing an image of a bunch of figures holding hands, something she later used as the foundation of a dance she created. The point is that the feeling is primal – you don’t know quite why you connect with the image but there’s a deeper feeling that just resonates with you. And I felt that when I first saw Bailey’s work. 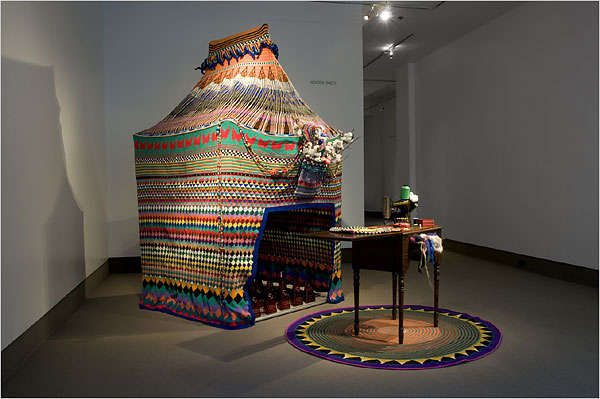 In doing some research into the artist I found out (via the Vermont Studio Center) that Bailey was born and raised in Seattle and went to college in Washington to study ethnomusicology. (How awesome does that sound?) She became interested in African culture and crafts and began doing mask-making and costume design as well as industrial design. Bailey learned to crochet from a teacher at a Brooklyn community center and that was when she launched into crochet work, using her interest in Africa as a source of inspiration to create unique crochet hats. Her work has been in numerous museums, including some permanent collections, and she has held several artist residences. 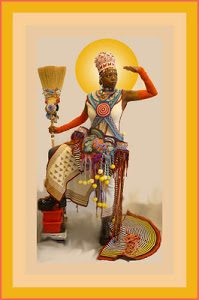 According to Fiber Deviant:

Xenobia Bailey does absolutely beautiful crochet artwork… she works mostly (if not exclusively) in single stitch crochet and using mostly acrylic & cotton yarns and plastic pony beads. Which, to me, exemplifies the fact that you don’t have to know all of the fanciest or complicated crochet stitches… and that you can make STUNNING artwork with humble components.

I just think that this is awesome. The three things that I think stand out about Bailey’s crochet art are the great colorwork, the geometric patterns she creates with her stitching and the overall shape and structure she chooses for each piece of work (be it a hat or a hanging art piece). 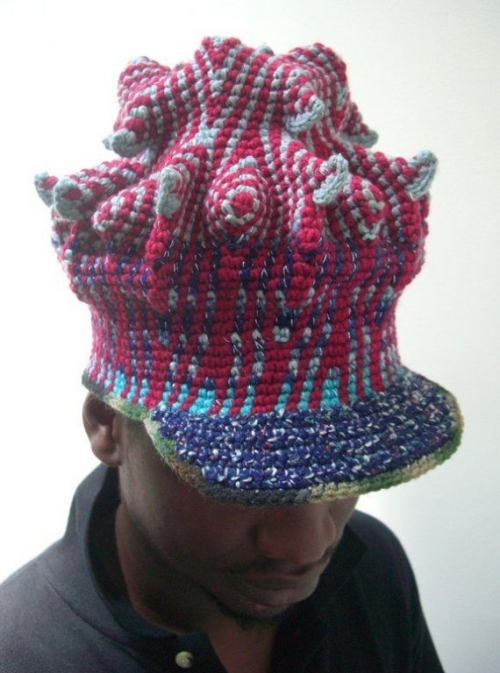 One design in what Bailey calls “a series of up-beat, Funky Chic Hand Crochet Urban Crown for all the SuperNatural, Everyday People of the Planet” 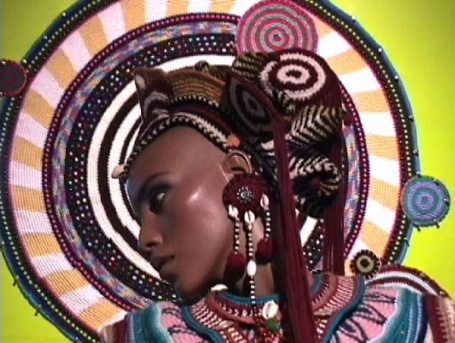 Paradise Under Reconstruction in the Aesthetic of Funk, 2000 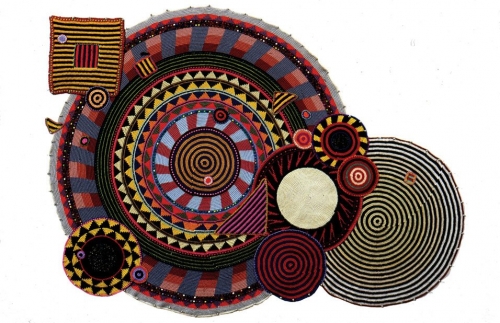 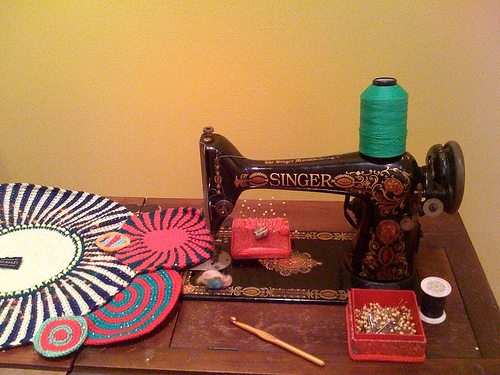 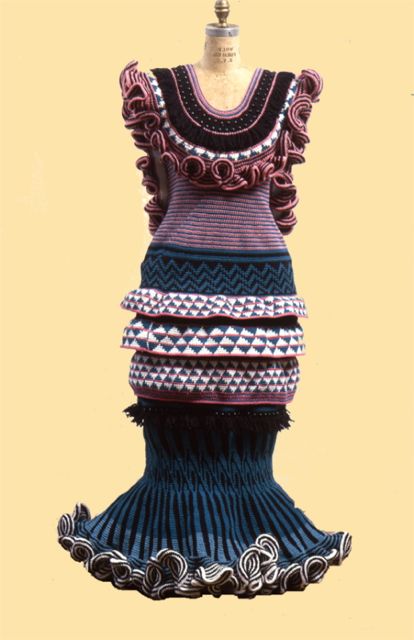 I adore some of the things Bailey has had to say. Like this, from her Etsy store:

“I love the experience of creating objects of adornment and objects for an alternative lifestyle in the Aesthetic of Funk.”

And this, from the video shown above:

“I make art to stay sane, to be centered and be able to reflect on myself, my psychological state. You know, it’s a psychological mapping of where I am, where I am trying to go. It’s a way of expressing and of growing.”

Share your thoughts on Xenobia Bailey’s crochet art in the comments!