I spend a large percentage of time reading about crochet art so I feel like it is a subject about which I am fairly knowledgable. However, every now and then one connection will lead me to another and I will realize that there is some gap in my crochet art knowledge, that there’s an artist I should’ve known about and didn’t. That’s what happened when I interviewed crochet artist Leslie Blackmon and she mentioned sound suit crochet artist Nick Cave. How did I miss knowing about this guy’s work until now considering that he’s gotten attention all over the web, been featured in Vogue and has been making his soundsuits for two decades? I’m not sure why that gap was there but it’s filling in now as I research this cool artist. Here’s what I’ve learned.

Nick Cave is an artist who works across a vast area of mediums, melding not only crochet and painting like some artists (including Leslie Blackmon, actually) but also incorporating performance art, video, fashion and installation art. His work shows in exhibits around the world (including a fall exhibit at New York’s Jack Shainman Gallery) and is sold online through SoundSuitShop.com. Cave is also the fashion department chairman of The School of the Art Institute of Chicago.

What Cave is well known for creating are his SoundSuits. He had been creating these for twenty years when they got attention with a spread in the September Issue of Vogue, taking the recognition of these pieces to a whole new level. According to that Vogue article Cave created his soundsuits in the wake of the 1991 Rodney King beating. He built this suit that was part new persona and part shelter from this frightening world. And then soundsuit was born – a fashion item, a costume, a performance piece, art. The suits are so named because they make noise when they are worn. What I love about them is that they are bold in size, shape and color. I also love that they are designed to be worn (artistically, obviously) rather than only hung on the wall of a gallery.

In a Hearsight article Cave talks about the importance of humanitarianism in art.

“The word “humanitarian” sounds a bit odd, or strained, until one recalls that Cave is not only a visual artist and organizer, but a performer whose roots in dance bring a constant urgency to not just look at other bodies, but to feel his own skin. Magazine photos and streaming video are phantoms. The Soundsuit covers every inch of its wearer like an embrace.”

More about the specifics of Cave’s crochet work

Cave’s soundsuits incorporate many different elements and of types of artwork. Crochet is only one of those elements. However it is featured frequently and consistently throughout his work, which is why I’ve included him in my roundup of crochet artists. I do want to note that from what I understand he doesn’t actually do the crochet and knitwork in his pieces (although I imagine he must do a bit of it in adhering the pieces to one another) but instead relies on found art to create these pieces.

Some of his work: 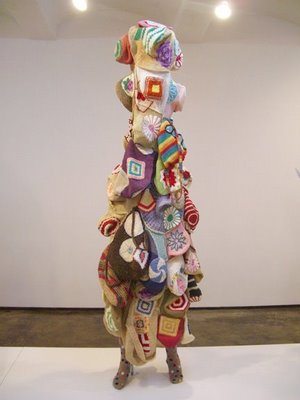 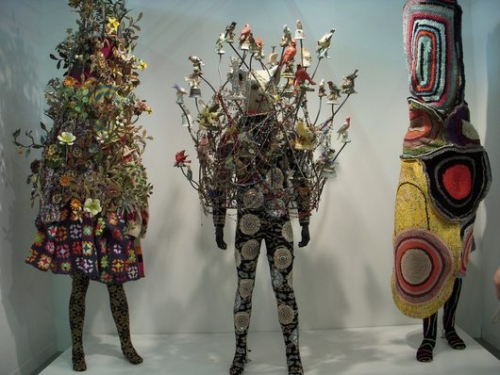 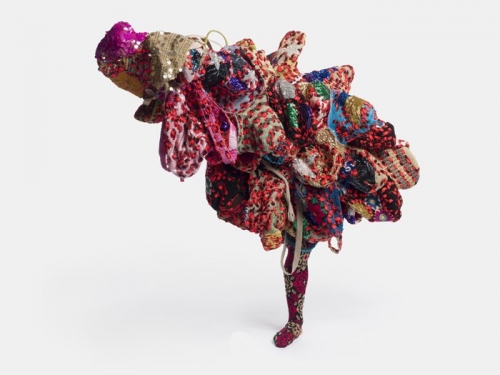 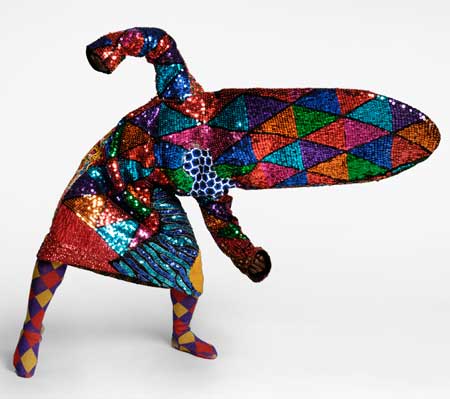 Nick Cave around the web:

Do you know about the work of Nick Cave? What are your thoughts?