For fun I used TweetCloud to generate a word tag cloud showing the words that I used most in my tweets in the past 6 weeks or so. Here’s the cloud:

It’s no surprise that crochet makes the biggest appearance since that’s basically all that I Tweet about. And it makes total sense that etsy, yarn, pattern, book and quote are all of there since I’m a frequently write / Tweet about those things in relation to crochet (like crochet quotes which I blog here daily and Tweet about when they’re blogged). It’s also no surprise that Twitter, follow and blog are there since I like to encourage people to check out others who tweet and blog about crochet.

What I was surprised and excited to see in the cloud were positive words like happy, love, thanks, awesome and good. In the months to come I want to make sure that I keep using such positive words (which is easy since I love crochet!)

I was also a little surprised to see “scarf” make it on the list. I do crochet scarves but I also crochet a lot of other things and post a lot of different crochet items from other people on my site so I think it’s odd that scarf came up and other items didn’t. Hm.

As for some of the weirder words, I guess you have to know my Tweets to get their context. I’m sure that “sounds”, for example, comes from the fact that I frequently let people know that their work/plans/idea sound great (or awesome, apparently!) And check isn’t about money but about my desire to check out something that someone else posted on the site! :)

What does your TweetCloud say about you? 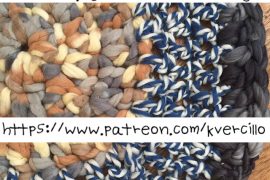