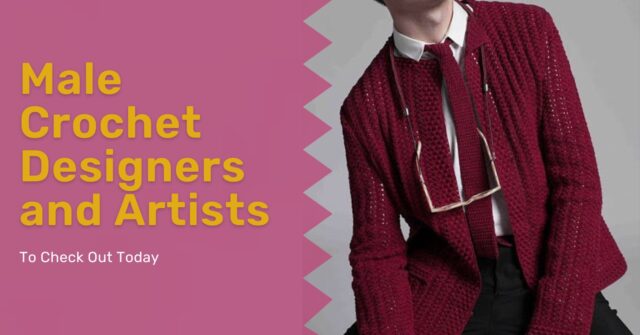 Many amazing women crochet and we celebrate them often in our crochet community. But it’s good to sometimes take the time to specifically recognize the men who crochet.

Many men do crochet and have for a long time, and quite a few are talented artists and designers in their own right, playing inventively with form, color, and subject matter.

Here’s a look at 20 wonderful male crochet artists and designers.

Dale Roberts is a male artist who does mixed media work utilizing a lot of crochet. He loves to work with basic single-crochet and double-crochet stitches in unique ways. He is also well-known for his needle-felting work, especially his needle-felted portraits of famous people.

Nathan Vincent is a crochet artist whose work has been featured in crochet magazines and art exhibits.

He is well known for projects such as his crochet locker room and his installation “Let’s Play War,” shown below.

This installation was a collection of child-sized crochet figures styled after the children’s toy.

The exhibit juxtaposed a violence-centered toy typically reserved for boys with a domestic craft often associated with women and girls. It also explored the ways children are encouraged to associate weapons and aggression with play and fun.

Miller and Shellabarger are a husband-and-husband duo who are a partnership in both art and life.

They produce many different types of art, including some crochet. Their well-known performance art crochet piece Untitled (Pink Tube) has been in progress and performed since 2003.

In this art performance, the artists began with a crochet ring, and each worked outward from one side, producing an ever-growing pink tube.

Over the years, the tube has gone from quite short, requiring the two men to sit very close together, to very long. Now, they can choose to sit in different rooms or to sit together, with the result of their work piled between them.

It’s a moving metaphor for a long relationship and all that develops between two people over time. Perhaps that’s why, nearly 20 years later, they are still performing this project.

Andy Aguilar is an artist who makes crochet and knit amigurumi characters and then does videos using them as the characters. They’re edgy, urban videos that aren’t what you typically see in the crochet world.

Frank Lincoln Viner was a crochet designer in the 1970s. He made beautiful crochet coats as well as more three-dimensional sculpture pieces.

In an interview, Nottingham credits his involvement with the church as an altar boy with his initial interest in fibers. After serving in the Korean War, he attended college on the GI Bill and majored in art.

Here’s another award-winning male fashion designer who uses crochet in his designs. This Filippino designer specializes in men’s and women’s formalwear and has had his own Atelier since 2008.

Nigel is a fashion designer who learned to crochet as a child in Trinidad. He started out making hats for himself but eventually launched his brand, which is focused on honoring his cultural roots and creating sustainable fashion.

He produces original crochet pieces as well as uplifted pieces, such as the Vans shown below.

Zelaya is an immigrant from Honduras who made money for himself and his family while working toward his college education in America by selling crocheted beanies.

Zelaya has now earned his Ph.D., and when he speaks in schools about the power of higher education, he crochets a bracelet for every student.

Guildford is an artist who creates large-scale crochet installations with an eco-message. He draws inspiration from his home on the coast of Nova Scotia, where he also gathers natural and found items that are used in his sculptures.

Ivano Vitali has always been aware of environmental issues. In fact, in 1995 this awareness drove the artist to stop using traditional materials altogether, and turn to using recycled newspaper as his only medium.

Vitali states that his “guiding light” is his belief that creativity must be expressed without doing damage to the environment, and that it is urgent and unavoidable that we work toward ecological change.

This artist combines art and fashion using unique crochet and knitting as his medium. He crochets paper into stunning works of wearable art, tapestries, and crocheted sculptures. Learn more about Ivano Vitali here.

This unique guy has made an entire lifelong art career out of crocheting penises! He earned a college degree in art and education, and then a Master’s Degree in textiles. Soon after, Davis began crocheting penises to glorify sexuality during the sexual revolution of the 1970s.

Jerry Bleem is an artist who loves to explore controversial topics like politics and religion in his art. How interesting that he uses the soft art of crochet to make many of those statements!

In his Nationalism series, Bleem cut a United States flag into strips and crocheted it into new and abstract shapes. He states that his goal was not to desecrate the flag, but rather that cutting it apart and refashioning it with his hands allowed him to reflect on patriotism.

Evan Plevinski is a knit and crochet designer. He works for Happy Knits and sells his patterns (like the crochet shawl shown here) through Ravelry.

Aldo Lanzini is a crochet costume designer and lecturer at Nuova Accademia di Belle Arti Milano who also makes some edgy wearable fashions. He creates unique crochet masks, starting with no distinct plan in mind and developing the mask as he goes.

Below, you can see a short video that features an exhibition of his masks.

Nick Cave is also a crochet costume designer. He is best known for his “sound suits.” These mixed-media wearable sculptures are designed so that each garment produces its own unique sound – his first one was made from fallen twigs gathered in Grant Park.

Below, you can see an exhibition of these incredible suits at the Guggenheim.