How to Read a Crochet Pattern 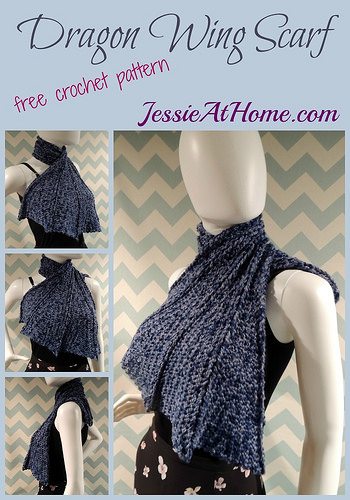 For this guide, we are going to break down the Dragon Wing Scarf free crochet pattern designed by Jessie At Home. This guide shows you portions of the pattern for the purpose of teaching you how to read a crochet pattern. She does a great job of executing every part of a crochet pattern, making this a perfect choice for learning how to read patterns. If you want to get the full crochet pattern to make this beautiful scarf, you can find it on Jessie’s website.

How to Read a Crochet Pattern: Description and Skill Level

The first thing that you’ll typically see after the name of a crochet pattern is a description of the piece. Although you can tell a lot by looking at a crochet designer’s photos, you want to read this extra info to make sure that you want to work the pattern. We can tell from the beginning of Jessie’s description that she also has this pattern in a knit version; if you are able to both knit and crochet then you might decide you want to knit it instead!

A thorough crochet designer will include the “skill level” of the crochet pattern. Jessie lets us know that this one is “intermediate”. Designers may each have their own criteria for determining this, but generally you know that an easy or beginner level pattern only requires knowledge of basic stitches, an intermediate pattern may require more advanced stitches or some shaping and an advanced pattern may require special techniques. Don’t let a pattern’s skill level deter you from trying out something you really want to make; just go in to it with the right expectations.

How to Read a Crochet Pattern: Materials

Before you begin working on a crochet pattern, you need to look at the part of the pattern that tells you what you will need to crochet this project. You will learn what yarn was used by the designer and how much of it was required. A thorough designer will not only tell you the yarn that was used but will also tell you about that yarn. In this case, Jessie gives us a breakdown of the fiber; if you wanted to substitute a different yarn, you might look for one with a similar percentage of each fiber to get the closest possible to her design. Alternatively, the designer may just tell you a yarn weight; if it says a DK weight then you might substitute another DK weight yarn but wouldn’t use a bulky yarn.

This section will also tell you what size crochet hook to use. You will also find out if you need any additional materials; for example, if this were an amigurumi pattern instead of a crochet scarf pattern, you might need to buy polyfill stuffing and toy eyes. Some designers also let you know about optional materials, such as a tapestry needle for weaving in ends (which you may choose not to get if you prefer to weave in your ends with your crochet hook).

Sometimes this section of the pattern is also where the pattern show the finished size of the project; that way if you want to adjust the size yourself then you’ll have a good starting point for guessing how much yarn you’ll need. Even if you don’t intend to adjust it, it’s important to know what the intended size of a project is – and whether there are instructions to make different sizes – so that you end up with the item you intended to make. In the pattern selection above, we see that this scarf is going to be 36″ long and 23″ at the widest point.

How to Read a Crochet Pattern: Gauge

Speaking of finished size, it is highly recommended that you make a gauge swatch for most crochet patterns, particularly where the finished size needs to be exact. Crochet designers will include gauge information in their patterns. Some designers will only include the numbers (such as the “8.5 spider sts by 16 rows” that Jessie shares above) while other designers will provide extra detailed information to help you get your gauge swatch right (which Jessie also does in the original full pattern). You use this information to make a swatch to make sure that your stitching matches that of the designer. If it doesn’t, you need to adjust your tension or hook size in order to get it to match so that when you go into making the full pattern it turns out the right size.

How to Read a Crochet Pattern: Stitches 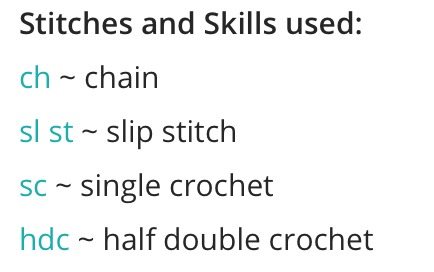 The first thing you should look at in this part of a crochet pattern is whether or not you are familiar with all of the stitches. If there is a stitch on the list that you haven’t learned, you need to locate a source and practice the stitch. For example, let’s say that you are a beginner crochet who hasn’t yet learned how to half double crochet. You can see that Jessie’s pattern uses this stitch, so you would need to find a resources for hdc and learn it before proceeding with the pattern. Note that many online pattern designers will link to their own tutorials of the stitches used in the pattern to help you out. Crochet books and magazines often have a basic stitch guide at the beginning or end to assist you.

The other thing that you want to look at in this section is any information on “special stitches”. We don’t have any listed in Jessie’s pattern, but let’s say for example that the pattern uses a v-stitch. Under special stitches, the designer tells you what a v-stitch means in this pattern. In most cases, people will assume that a v-stitch is worked as dc, ch 1, dc but let’s say that in this pattern the designer says that a v-stitch is dc, ch 2, dc. It’s not your job to argue with the pattern designer; the designer has provided this information right there in the “special stitches” section so that you know exactly how to work that stitch for this particular pattern. Even if you think you know how a stitch is worked, read this section carefully before you begin.

How to Read a Crochet Pattern: Row-By-Row Instructions

Once you have decided on a pattern, selected your materials, checked to make sure you understand the stitches and are ready to go, it’s time to dig into the pattern. The pattern is typically written as row-by-row instructions, using abbreviations. We will break down the section of Jessie’s pattern shown above to help you learn how to read a crochet pattern. It can look overwhelming when you haven’t done it before, but as you read along, you will see that each row can be broken down into tiny steps until you understand exactly what you need to do.

As you can see, in this pattern the next set of steps if for “rows 2-58”. This means that you follow all of the steps below, repeating them all for each new row, until you have completed row 58 of the pattern. Each of these rows is worked exactly the same as one another.

Let’s look at one more row to make sure we’ve got the hang of how to read a crochet pattern.

How to Read a Crochet Pattern: Finishing

Once you have crocheted all of the rows of the pattern, there will be information about how to finish the pattern. It might simply say:

Alternatively, there might be instructions about how to add a border, seam different portions of the project together, add buttons or otherwise complete the finishing touches. These are typically spelled out, without abbreviations or using only common abbreviations, to help you wrap up the project.

OTHER THINGS YOU MIGHT FIND IN a Crochet Pattern