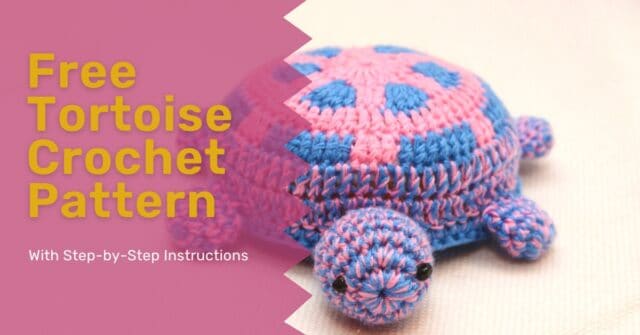 As a Valentine’s Day gift to you, I wanted to share the free crochet pattern for the tortoises by Linda featured previously on this blog.

Linda Davie so generously shared her story with us last fall about dealing with cancer and how she used crochet designs to help keep herself healthy and distracted. She loves to crochet to give to others.

Linda’s latest project. “She found a pattern in Russian for crochet tortoises, so spent a very long evening translating the pattern into English and made this fantastic tortoise and is planning at least a couple more.”

One of the tortoises that she’s made is a rainbow tortoise to help fundraise for an LGTBQ+ teen suicide prevention function.

Link for the original pattern page. You will need to access this page if you wish to view pictures that may help you (for the skeleton structure, mouth, and eye position) – I will not be reproducing them here. The turtles represented on the page are all made using the same thickness of yarn – but the turtles do get smaller in size as you go up the stack. From what I can tell, they have achieved this by using smaller hook sizes for each turtle.

The turtle is made in the Amigurumi style of crochet – use a stitch marker to mark the beginning st of each round – move it after every round to the last stitch that you worked.

*There is no need to leave extra-long threads when finishing off body parts as they are attached to the body by crocheting in later rounds of the under-belly…not much sewing required other than sewing in ends!

You will need to make 4 of these!

Continue working rounds, inc in the first st of each round until you have 14sc in total, finish off.

(make 7) It may look daunting, but long story short…..you are just working a normal circle, changing colors halfway around. Just take your time and follow each step.

In main shell color (A), 6 sc in a magic ring, place stitch marker.

Rnd 2: Continue in (B)…..(1sc, inc) 3 times, then before you drop (B) pull up a loop of yarn so that your previous work will not be undone while you work on the next color. Insert your hook into the loop that you made before (A) and pull it up tight to your hook then work (1sc, inc) 3 times with (A) working into the top of the (B) sts that you worked in the previous round. mm (18sts)

Rnd 3: Continue in (A)……(2sc, inc) 3 times, then before you drop (A) pull up a loop of yarn so that your previous work will not be undone while you work on the next color. Insert your hook into the loop that you made before (B) and pull it up tight to your hook then work (2sc, inc) 3 times with (B). mm (24sts)

Rnd 4: Continue in (B)…..(3sc, inc) 3 times, then before you drop (B) pull up a loop of yarn so that your previous work will not be undone while you work on the next color. Insert your hook into the loop that you made before (A) and pull it up tight to your hook then work (3sc, inc) 3 times with (A). mm (30sts)

Rnd 5: Continue in (A)……(4sc, inc) 3 times, then before you drop (A) pull up a loop of yarn so that your previous work will not be undone while you work on the next color. Insert your hook into the loop that you made before (B) and pull it up tight to your hook then work (4sc, inc) 3 times with (B), then remove stitch marker and finish off (B). (36sts)

Join hexagons using one motif as a centerpiece and connecting the others together around it using whichever method you are comfortable with using, either sc or sew together. I chose to sew mine together to get a ridge between each motif – either look is fine.

To create the rest of the shell, work around the outer edges of the motif group that we have just joined together. Join main shell color (A) with a sl st into the join between any 2 hexagons, ch 1.

Rnd 4: (sl st, 15 sc, sl st, 3dc tog) 6 times – your 3dc tog should fall into the joint between the hexagons of the previous round……they will fill the ‘valley’ and form a straight line for the next rounds.

There are different pattern suggestions shown in the pictures on the linked page, but they don’t actually give a pattern for them as such – you can just do a plain shell or create a random pattern. I did mine in dark grey and then did every 1st sc in each set in every round in light grey, then between those lines, I just placed random stitches of pink and light grey to tie in the top shell colors.

Basic tummy is as follows:

7sc in a magic ring

*Finish patterning here as this is where the shell-plate ends and the sides begin – continue in single belly color.

Rnd 16: (15sc, inc.) 7 times (119sts) * I wanted the ‘shell’ to have an edge, so I worked this row in the back loops only – it’s entirely up to you……you can just work a normal sc round if you wish – makes no difference overall. I also worked rnd 16 and the remaining rounds in light grey – you do not need to change color if you don’t wish to.

Join the Body Parts as Follows

Rnd 20: sc in each sc of the previous row, capturing the remaining free stitches of the limbs and head as you work your way around.

Refer to the pics on the web page for making the ‘skeleton’ – you will need a piece of wire from the tail to the head, and two pieces of wire connecting legs in pairs, making sure to use the pliers to coil the ends of the wires so that they do not poke through the body. Before inserting the frame, I pre-stuffed the head, legs, and tail about halfway.

Insert the frame – I connected the legs and spine by tying with some scrap yarn but joining the skeletal pieces is referred to as an optional step-up to you. Once skeletal frame is in place, stuff the head, feet, and tail around the wires to keep them roughly centered.

Joining the Top Shell to the Under-belly:

Rnd 1: Align the top shell so that the head, legs, and tail are located in line with the joins between the spiral hexagons on the top shell. Have the top shell facing you as you work. Using your top shell main color and starting next to the tail, sc the 2 halves together. The top shell has 120sts, lower has 119 so sc all around and just take up the extra st when you get to the end of the row – it will not be visible on the finished turtle. It is a fairly tedious process to get the 2 halves together, but be patient – you’ll get there! Remember to firmly stuff your turtle before you finish this round and leave your yarn connected for the next round.

Change to contrasting color. I used my swirl color here – you can use whatever you like.

Rnd 6: Change back to your main shell color, sc in each st around, finish off.

Now for the Gorgeous Face!

Embroider mouth, placing your stitches smoothly between the rows as pictured.

To attach eyes, insert the needle into the corner of the mouth, and navigate it to the location of one of the eyes. Thread the bead into position, then push the needle back down to where you first inserted it near the mouth. As you tie off the threads, pull tight enough so that the cheek and ‘smile’ is formed at the same time as the eye is pulled down into the head. Tie the ends off firmly and sew in thread ends. Repeat the same process with a new thread on the other side of the face.

A note about the eyes: The pattern as far as I could tell did not specify a bead size for the eyes – I used black 6mm wooden beads. When I made the eyelid stated in the pattern, it was far too big for my bead! I will provide you with the translated original eyelid pattern AND the one that I made up to fit my beads.

My Eyelid (smaller than original pattern)

For a slightly different look, I thought I’d also give you the option of a 3-color spiral hexagon!

Every color change in the spiral hexagon is done by pulling up the loop of the color that you are working on (to prevent it from unraveling while you work on the next color), then start your next color by placing your hook into the loop of your next color, pulling it up tight to your hook and start crocheting. SO…to save me typing that over and over again, AGAIN……where you see the word CHANGE, follow these instructions!

Another tip…if you are confused about which color you are up to, then copy and paste this pattern into a ‘Word’ document and actually change the colors of the (A), (B), and (C) in the written pattern to represent the actual color of yarn that you are working with.