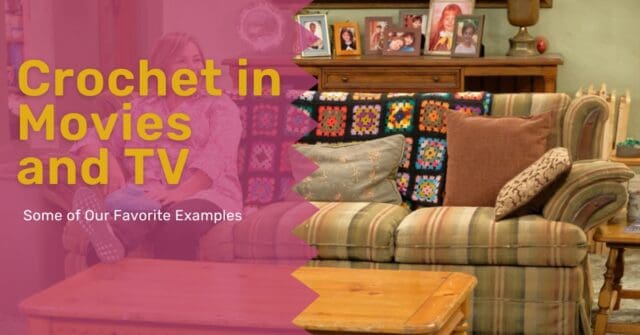 I love crochet items, so I always enjoy seeing examples of them in my favorite movies and TV shows.

Check out these examples of crochet in movies and tv shows, and let us know if you’ve spotted any others!

Maybe it’s the slow pace of the craft, but it’s not often that I see someone in the process of crocheting on TV or in a movie. However, it does happen!

The TLC reality show Breaking Amish features many scenes in which Abe’s mom Mary is crocheting. In season 2 she also teaches some of the kids to crochet. This isn’t surprising, considering that the Amish are well-known for producing handmade items.

If you want to crochet an afghan similar to the ones Mary makes, you can download this Lacy Chevron afghan pattern.

There is also a scene in The New Girl where Jess knits during a girls’ night, and some of her friends are crocheting.

Sometimes it’s not that you necessarily see people crocheting but rather you see them wearing crochet:

In the Harry Potter franchise, Mrs. Weasley famously knits each of her children a sweater every Christmas. It’s no surprise, then, that she enjoys crochet as well.

Lots of people love the crochet sleeve sweater she wore in Harry Potter and the Chamber of Secrets. If you want to emulate this style, you can purchase a pattern to make your own on Ravelry.

Nurse Jackie wears a crochet scarf. You can find a similar pattern available for purchase if you want to imitate her look, or you can check out some of our other ideas for crochet scarves.

This and That blog points out that Rhoda on Mary Tyler Moore wears a lot of knitwear and some of it definitely looks like crochet to me.

MindyTV shares that Juliette wears a crochet top in Grimm

Knit One, Knit Two points out the great crochet motif sweater in Clarissa Explains It All

Crocheted Items in the Background

It’s no surprise that TV shows make use of crocheted afghans on set- they’re colorful, textured, and make the set look homey and lived-in.

Roseanne‘s production designer, Garvin Eddy, and executive producer, Matt Williams, both grew up in the midwest. They agreed that crocheted afghans were a common item in many homes while they were growing up, and Eddy stated that the granny square design reminded him of the blankets his wife had made for their home.

Over the course of the show, the afghan became so iconic that it had to be stitched to the sofa on set to avoid it being stolen!

There are many handmade replicas of the afghan from Roseanne available for purchase on websites like Etsy.

Patterns for this type of blanket also abound. You can follow the free tutorial here to create your own granny square afghan.

Granny square afghans are certainly common on TV and movie sets, even when they aren’t as well-known as the one on the set of Roseanne. The Smurfs movie had a crochet blanket in it, and they appear in other shows including True Blood and Parks and Recreation.

More recently, Breaking Bad featured several crochet afghans, including this one which you can make for yourself using the free pattern.

8 thoughts on “Crochet in Movies and TV: Some of Our Favorite Examples”