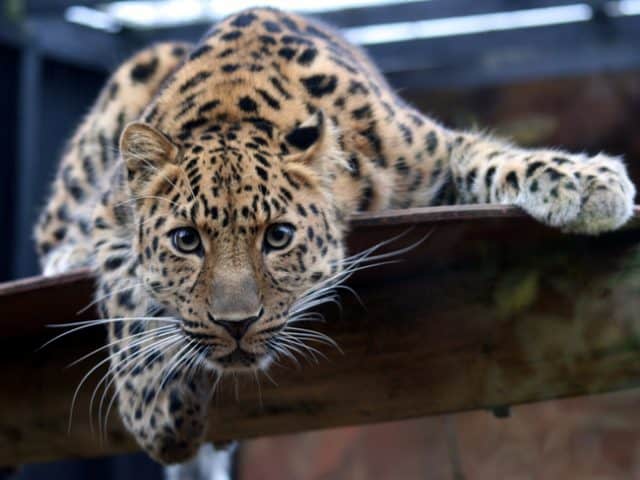 This post is part of the Endangered Animal Crochet Project, raising awareness about endangered animals and offering you ways to do the same. Today we’ll look at the leopard, learning more about the animal and curating some leopard crochet patterns. If you use any of these patterns, you are invited to share them on Instagram with #endangeredanimalcrochet hashtag and / or submit them for a feature here on the blog. All info in this post. 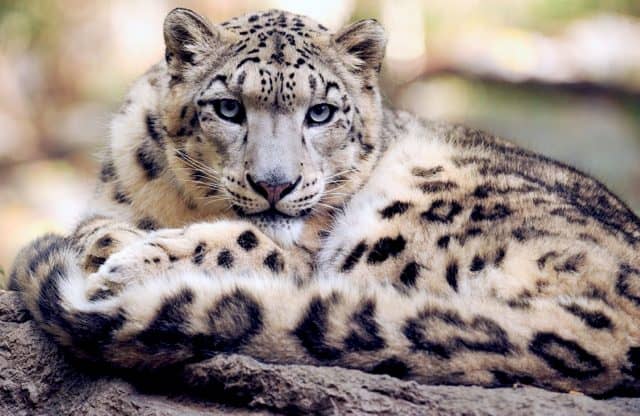 There are two different leopard on the World Wildlife Fund endangered species list: the Amur Leopard, which is critically endangered, and the endangered Snow Leopard.

The Amur leopard (also known as Far East leopard, Manchurian leopard or Korean leopard) is a solitary animal that lives in the forests of Far East Russia and Northern China. They are a rare species on the brink of extinction that are sadly poached for their beautiful fur. Their prey species are also hunted, leaving them without enough food. The Amur leopard cat population did recently double in size but there are still less than 100 of these animals left. One way that you can help is to virtually adopt a leopard. You can also learn about the Amur Leopard and Tiger Alliance, a coalition of 15 NGOs that are working together to save the region’s habitat. 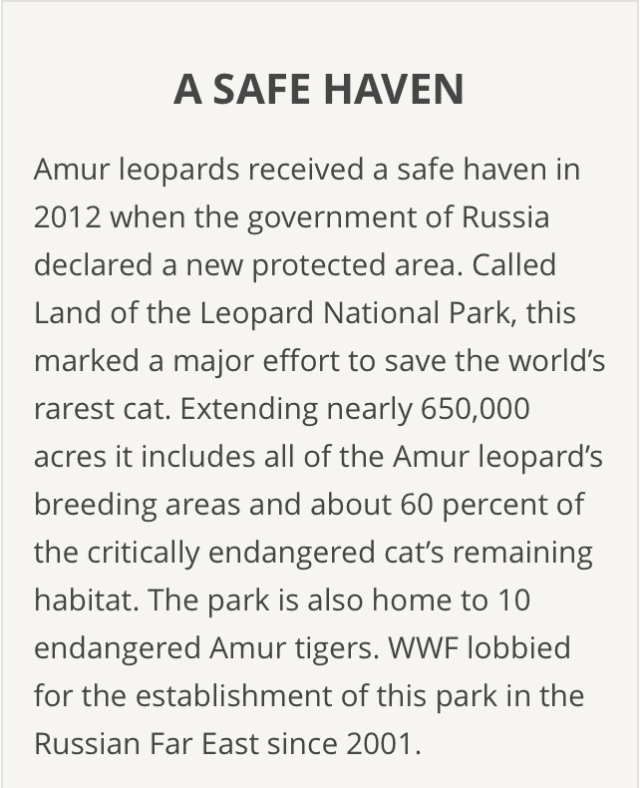 The Snow Leopard is a magnificent creature found in about a dozen countries including India, China, Afghanistan and Russia. It is an endangered animal that has no predator other than humans; people destroy them in retaliation for the cats killing their farm animals. They are also threatened by habitat loss and climate change.

Defenders of Wildlife has additional information on what you can do to help the leopards. You might also be interested in the work of Big Cat Rescue, “one of the largest accredited sanctuaries in the world dedicated to abused and abandoned big cats”, which also does work around the world as well as the work that the Wildlife Conservation Society does for big cats including the snow leopard.

Leopard crochet patterns come in two different styles: hats and stuffed animals designed to look like leopards and various wearables made with the leopard print. Leopard print crochet can be  great conversation starter for letting other people know why it’s better to use this faux version than to tolerate poaching of leopards for their fur! 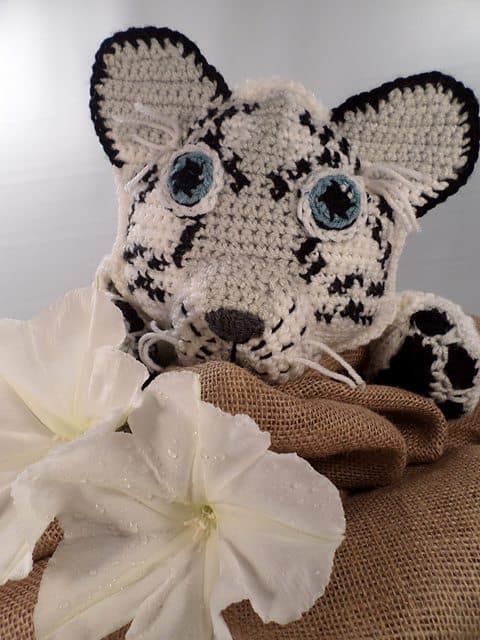 Galoshes the Snow Leopard is a stuffed animal crochet pattern for sale by Jenna Wingate on Ravelry. He is about 2′ tall and has a blanket-like body for cozy cuddling. His details are made using simple embroidery. 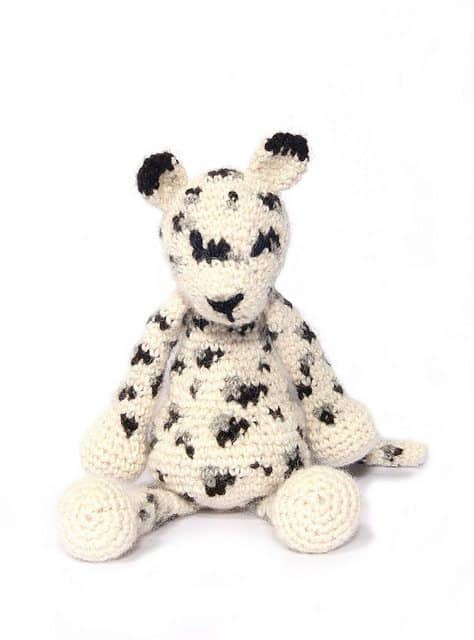 Mae the Snow Leopard is another stuffed animal crochet pattern. This one is by Kerry Lord and is a bonus pattern for buyers of the ebook variation of Edward’s Menagerie. 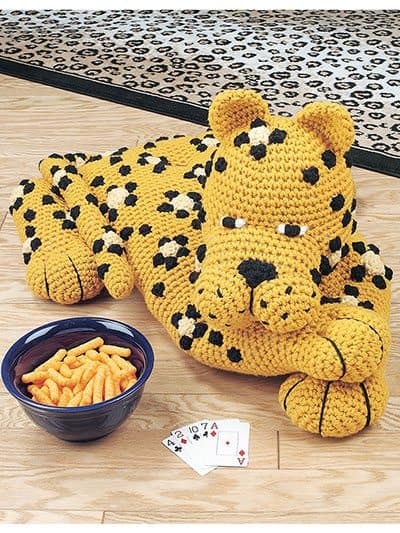 The Jungle Cats crochet pattern set by Annie’s has patterns for a leopard as well as a tiger and a lion. These are large and cuddly stuffed animals worked with a size K crochet hook. 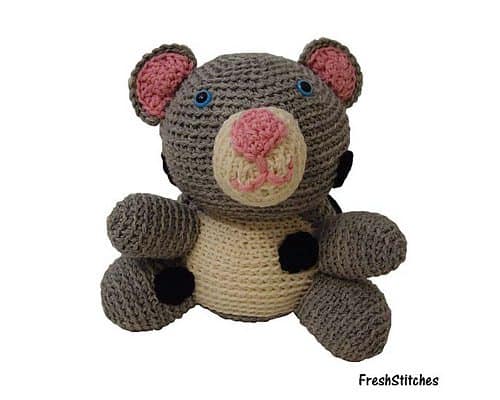 Sunil the Snow Leopard is a FreshStithes design. It has a cuddly cartoon-like quality with large crocheted spots. It stands a little over 8″ tall. 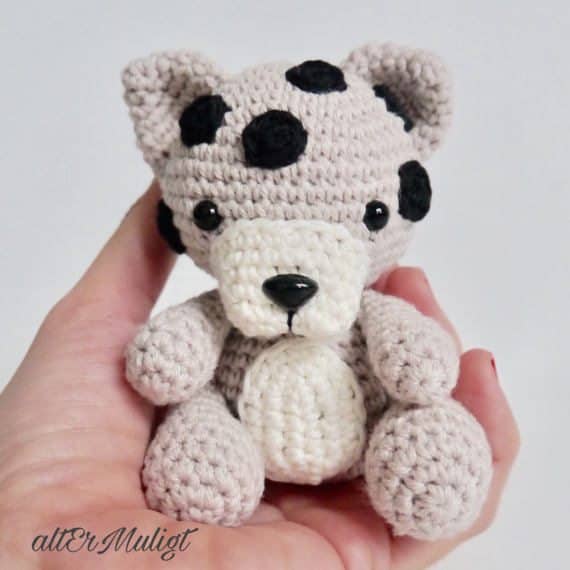 This baby snow leopard amigurumi pattern is sold by altErMuligt on Etsy. Super cute with lots of great detail! 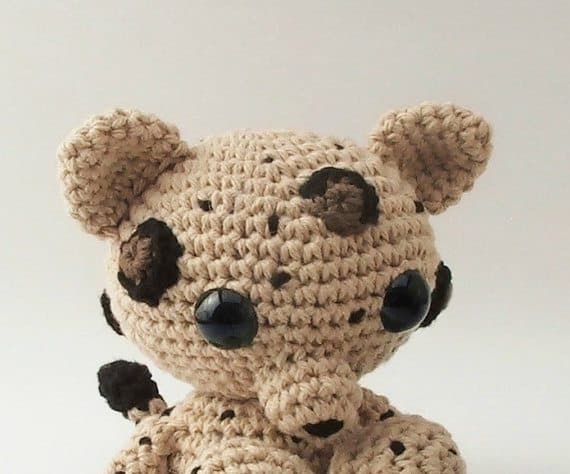 Leona Leopard is a small (6″ tall) amigurumi cat crochet pattern by Little Bitty Knitter on Etsy who says, “Give her as a kids toy, baby toy, or just a amigurumi animal pal for you!” 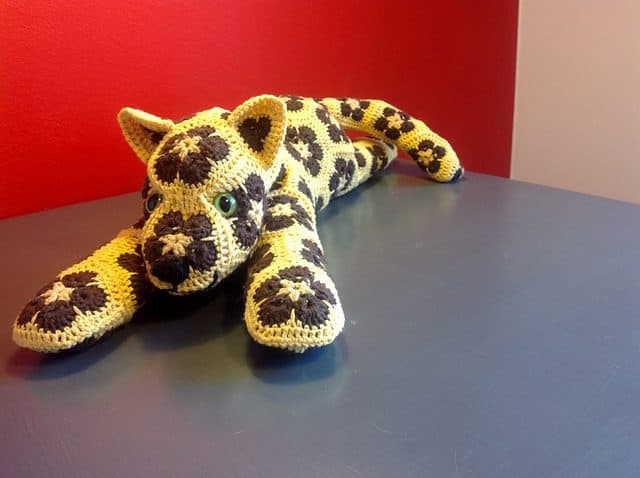 This is an African flower crochet leopard pattern. You’ll have to get the free crochet flower pattern separately and then use this tutorial, sold by e Raithoharju on Ravelry) to do the construction of the leopard. 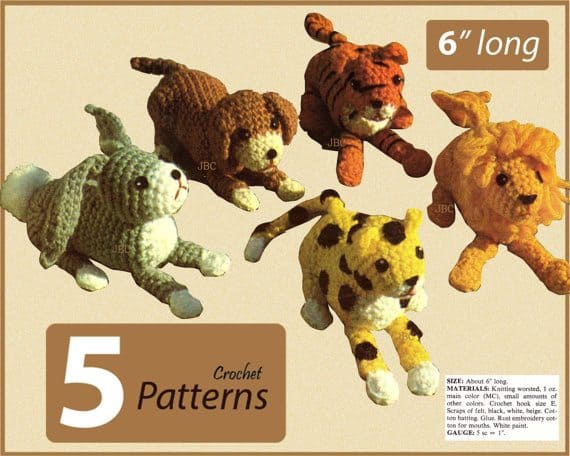 This is a vintage 1970s crochet pattern for a set of 5 small animals including a leopard. 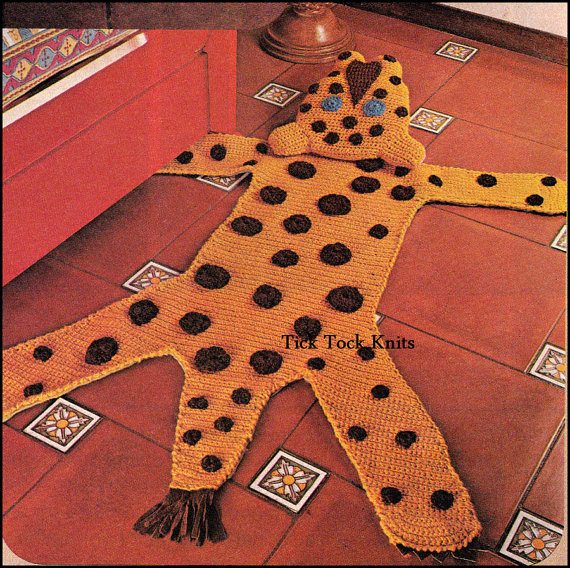 This leopard crochet pattern isn’t stuffed because it is designed as a floor rug! This is a vintage pattern that includes patterns for other wild animal rugs as well. The finished rug is about 50″ long. 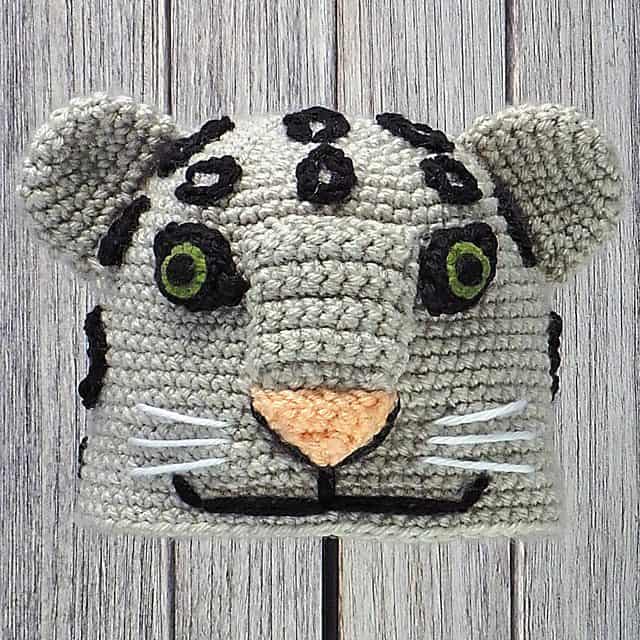 Crochet designer Linda Wright has several crochet animal hat pattern books that include variations on the snow leopard hat. This one, sized for newborns through age 5, can be found in the book Amigurumi Animal Hats: 20 Crocheted Animal Hat Patterns for Babies and Children. The version of this hat in her book for adults incorporates scarf / earflaps options. 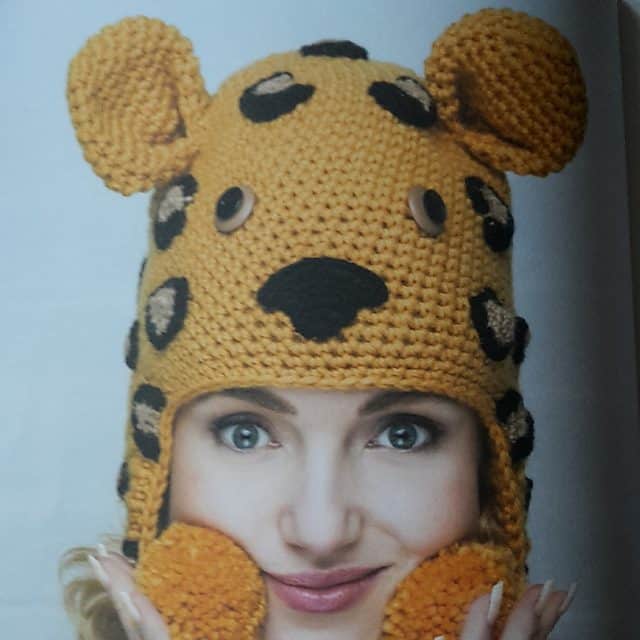 This leopard crochet hat pattern can be found in the book Crocheted Animal Hats by Vanessa Mooncie. 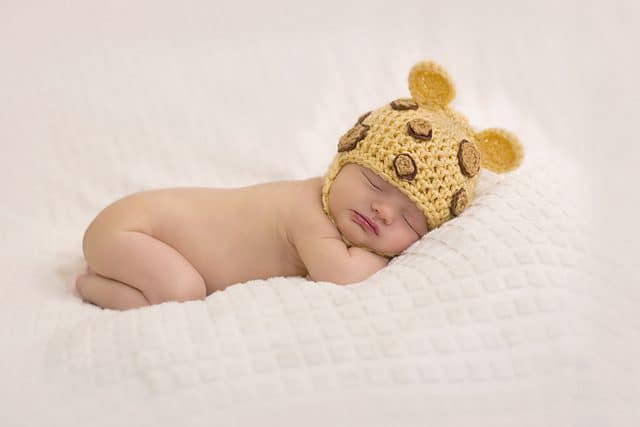 This leopard crochet hat pattern for babies has a chin strap to keep it on the child’s head so that it’s functional as more than just an adorable photo prop. In fact, the pattern comes in 5 sizes from newborn through young child size. The pattern is sold on Ravelry by My Sweet Potato 3. 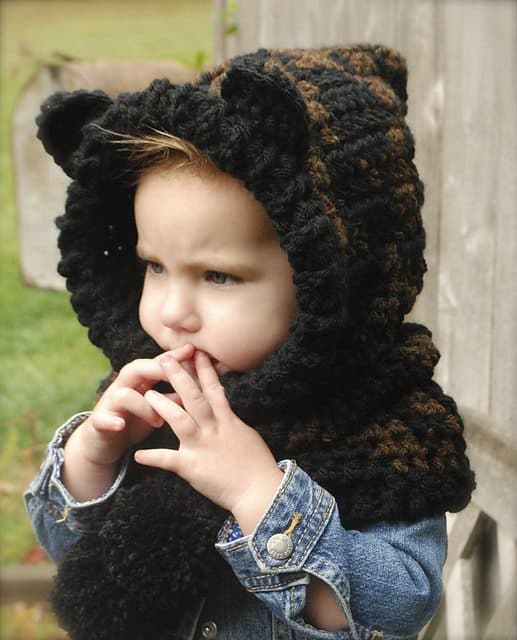 The Loxin Leopard Hood crochet pattern by Heidi May is an animal hat pattern in that it has ears and it is a leopard pattern in that it uses the print from the leopard in its design. It is available in a range of sizes from one year through adult. Cute and cozy! 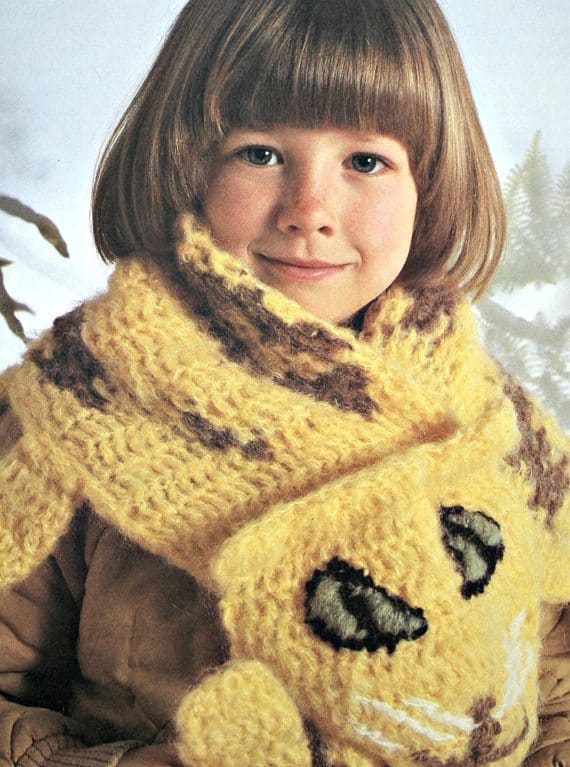 In addition to all of these cute hats, you’ll find a great vintage crochet leopard scarf pattern. This is a child sized animal scarf with a little bit of the leopard print in the body of the scarf and a face of a leopard stitched onto the end. There are paws too! 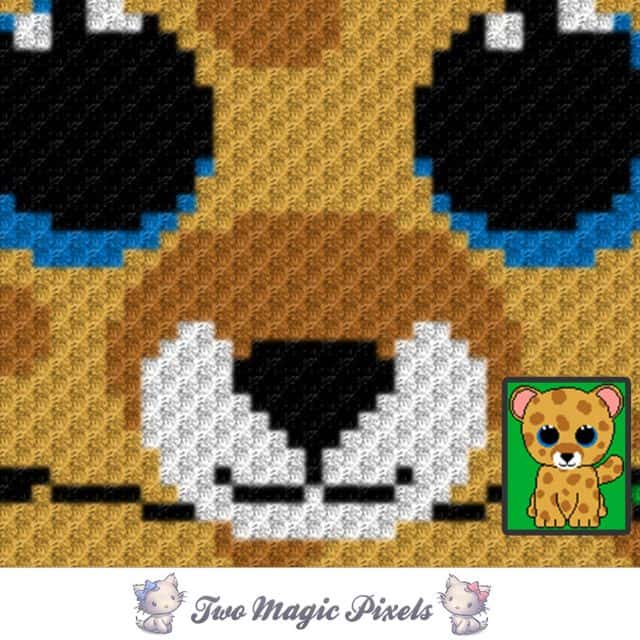 Check out this cute corner-to-corner crochet graphghan pattern featuring a baby leopard in its design. This is for sale on Craftsy by Two Magic Pixels. 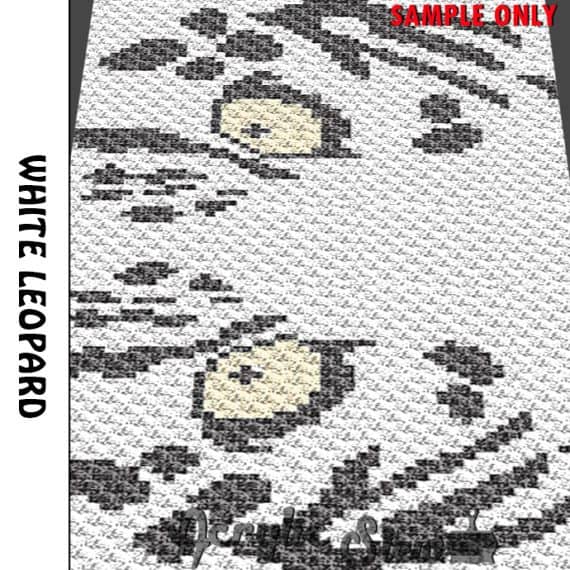 Here is a white leopard face crochet graph pattern that can be used to make a C2C blanket or other graph-based blankets. It is sold on Etsy by AcrylicStew. 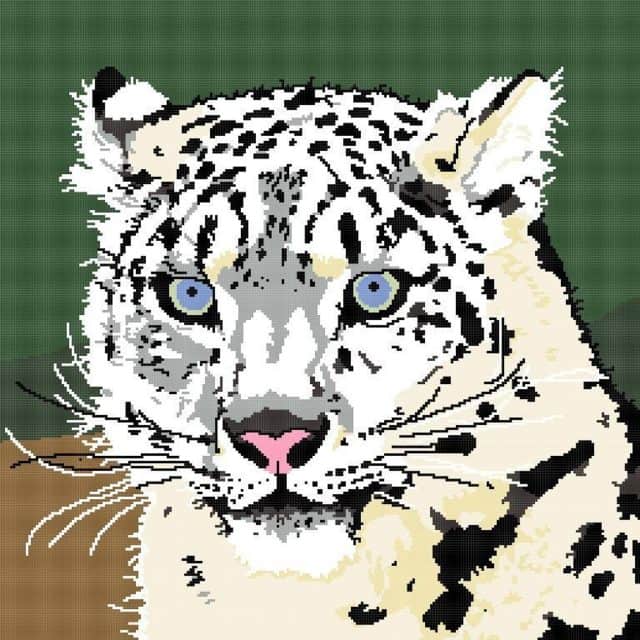 Here is a snow leopard crochet graph pattern also found on Craftsy by Smo’s Hodge Podge. This is a good graph for people who want to make a blanket using tapestry crochet.

There are leopard print crochet patterns designed to look like both the Amur and Snow leopard, plus there are designed worked in funky colors inspired by the animal’s print. 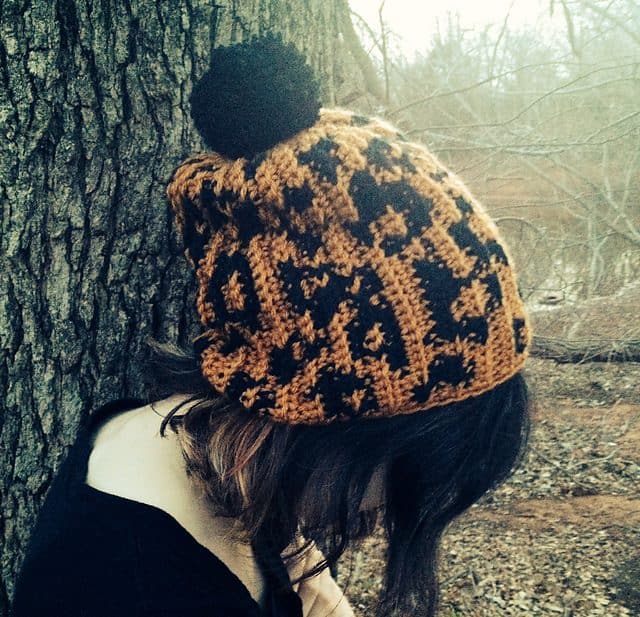 This is a crochet pattern for a graph to create the leopard print. Note that this specific pattern by Kimberly Ragsadale is not for the hat shown but just for the graph, which can be used to make a variety of different items. There is a separate pattern by Liz McQueen that shows you how to crochet a beanie using a graph like this one. 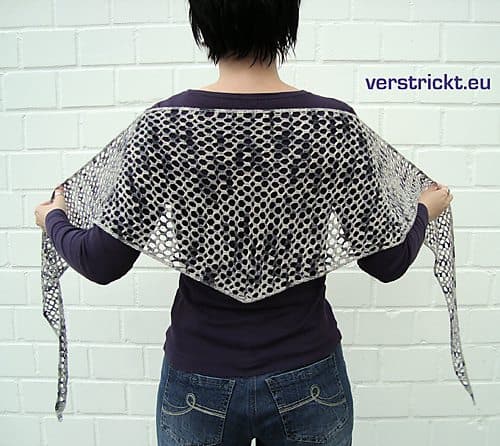 This leopard print inspired shawl crochet pattern is worked side-by-side. It is written in both German and English and is charted using both UK and US terms. It is sold on Ravelry by Andrea Delhey. 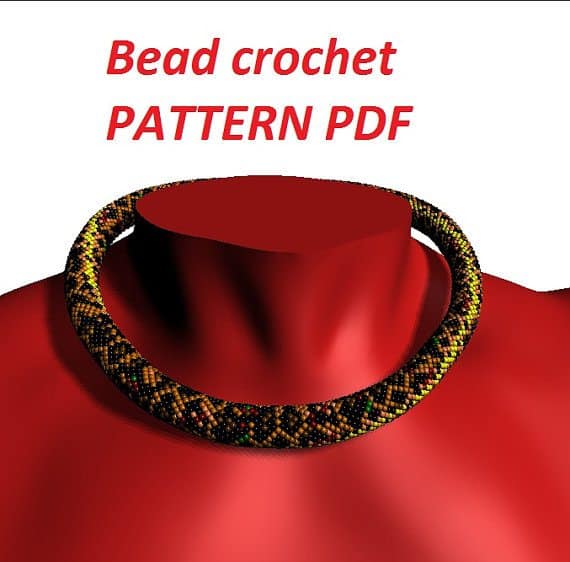 This is a bead crochet necklace pattern featuring a leopard print. What a great way to add the design into your personal style! This is sold on Etsy by ViolaOla. It is best for people who are already familiar with bead crochet. 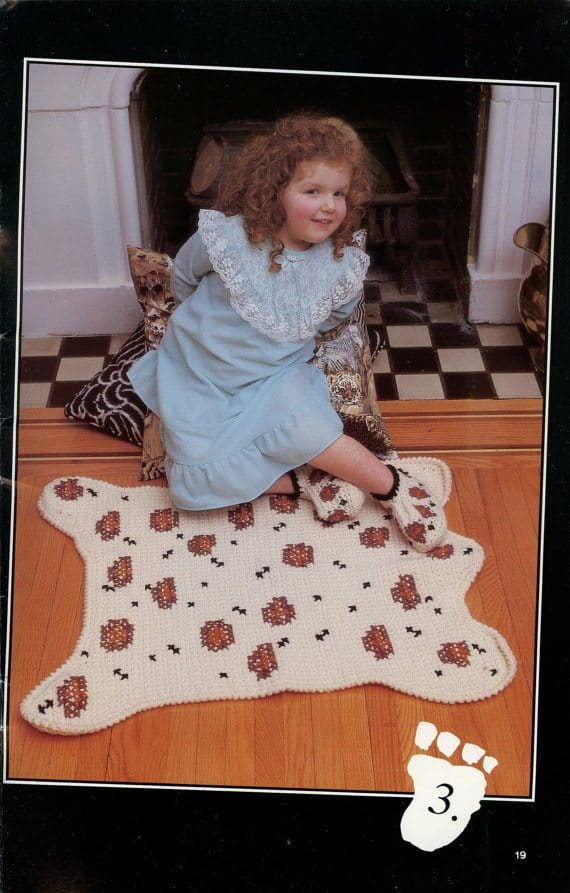 This is a vintage crochet pattern from a book called Patons Crochet Fun Fur Rugs and Slippers. As you can see this is a uniquely shaped leopard print rug with matching crochet slippers! The book also includes patterns for rugs based on other big cats (as well as a zebra design). 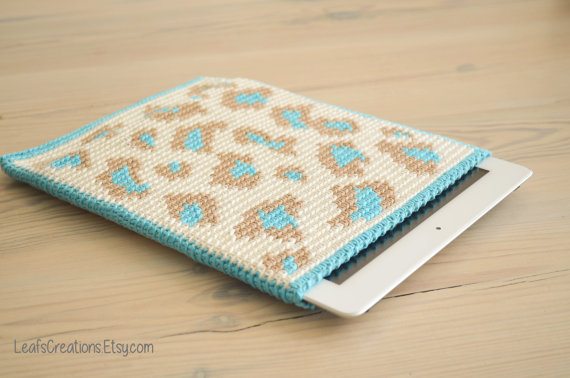 This Leopard Print iPad Cozy is a tapestry crochet pattern sold on Etsy by LeafsCreations. It incorporates some blue into the leopard design, giving it a fun style. Designs like this remind us that we can celebrate the beauty of the leopard print in creative ways without doing any harm to the animal! 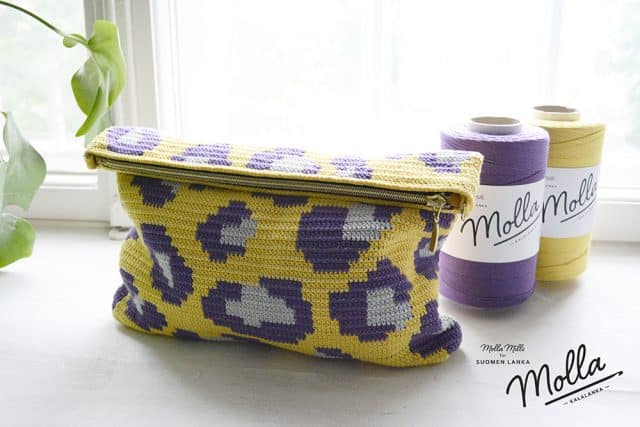 Here is a purple and yellow version of the crochet leopard print made into a zippered pouch. This is a free crochet pattern by Molla Mills for Suomen Lanka. 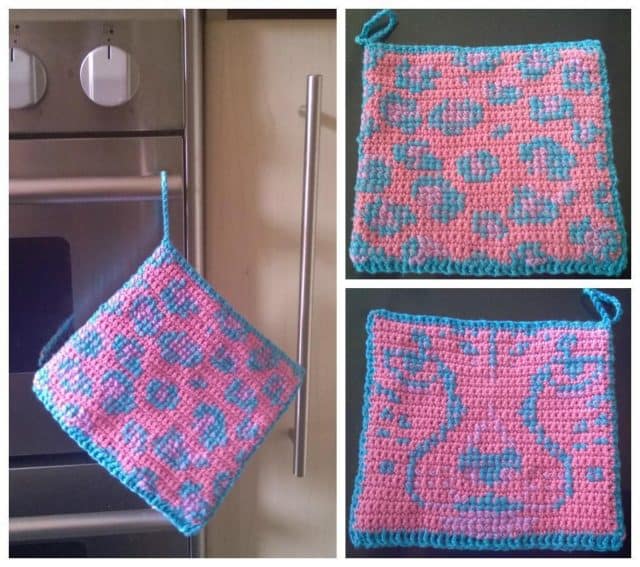 This cute crochet potholder pattern has the option of leopard print or the semblance of a leopard face using the print! This pattern is sold on Craftsy by Crochet Cuddles. 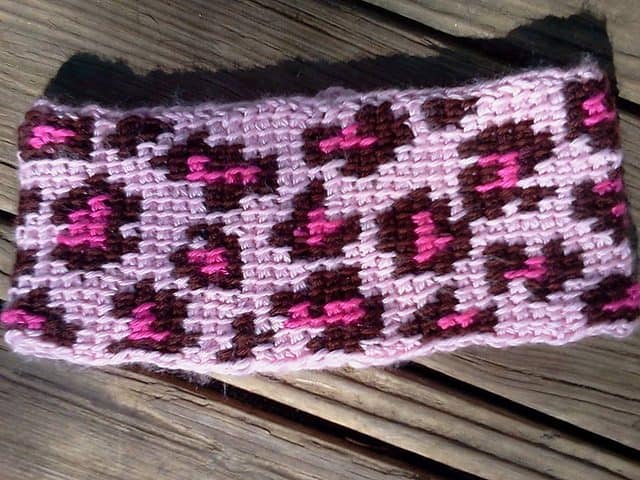 This is a graph crochet pattern for a pink leopard print crochet ear warmer sold on Ravelry by The Hookeraholic Crochet.

You can participate in the Endangered Animal Crochet Project. Crochet a leopard using any of these patterns or your own original design then do one or more of the following:

If you know of any other leopard crochet patterns, especially if the designer donates a portion of proceeds to a related cause, please feel free to mention it in the comments here. You can also share any thoughts you have (positive only, we don’t do negativity on this blog) about why it’s important to care about endangered animals in general and leopards specifically.