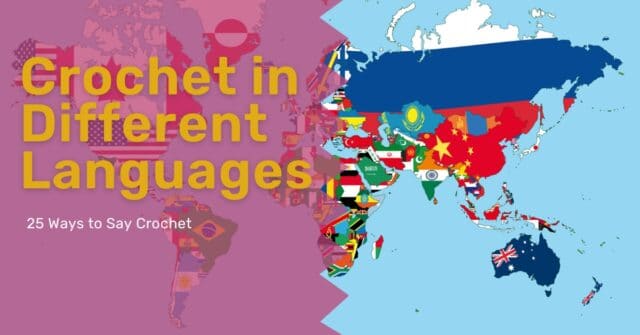 Lately, I’ve been spending a lot of time checking out foreign-language crochet blogs. I’ve also been looking at the crochet that people from countries outside of the United States share on Pinterest.

In order to find those things, I’ve done searches for “crochet” and checked out the foreign language blogs that I already know and follow. To find more, I’ve been running searches with the translated word for “crochet” in other languages.

I thought that you might be interested in how to say the word “crochet” in other languages. I’ve organized them into the table below.

If you find a crochet video that isn’t in your native language, here is a short video I found by crochet YouTuber Olga Poltava.

It shows how to turn on auto-generated closed captioning for YouTube videos, which can be automatically translated into many languages.

Origin of the Word “Crochet”

There is some evidence that crochet evolved from tambour embroidery, which was done by making embellishments out of a chain stitch made with a small hook.

The first reference to crochet in the 1823 magazine Penelope states that a tambour hook is used, and early crochet instructions use “tambour” and “crochet” interchangeably.

I should note that I’m using Google translate to find this information. I made a few updates based on corrections from commenters, but if you spot anything else that doesn’t look right, please let me know!

As you see above, in Spanish, “croche,” “tejer a croche,” and “labor de ganchillo” can all be used to refer to crochet. “Labor de ganchillo” translates literally to “work for a good cause” but often refers to textile work.

If there are slang words for crochet or other ways of saying crochet in a language that you know, I’d love to hear them!

11 thoughts on “Crochet in Different Languages: 25 Ways To Say Crochet”