I’m planning to curate as much crochet history information as possible, decade by decade. My research began with a deep investigation into 1930s crochet, which I’ve collected in year-by-year posts. I thought I’d round up that information in one post today to share everything I now know about crochet in the 1930s!

You can visit the links below to find many people who sell reproductions of vintage crochet patterns (usually on Etsy) and check out the individual posts (linked by year here, 1930-1939) to see the full information for each year. 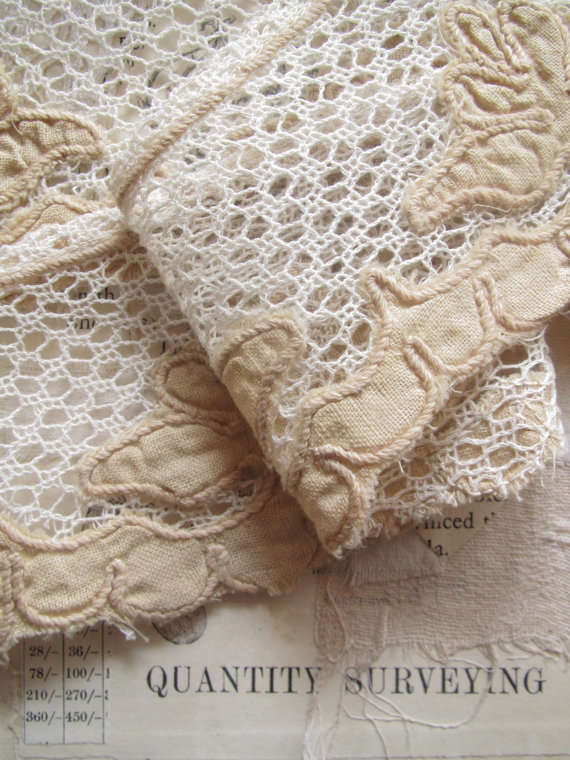 cotton and crochet embellishment, circa 1930, via Etsy’s EnglishVintage

The general trend in crochet at this time was to work in mercerized cotton thread using small crochet hooks. Lace crochet and filet crochet were popular techniques throughout the 1930s. Textured stitches like popcorns and bobbles began to appear occasionally, starting in 1937. Some of the most popular things to crochet (although certainly not the only things) were:

Here were my favorite things to discover in my research about 1930s crochet: 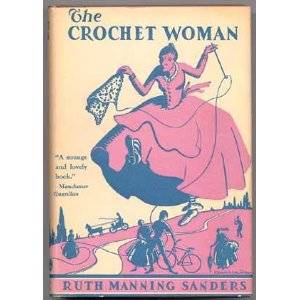 , one of her first full-length novels. Bella Crochet explains that The Crochet Woman is an evil queen who uses her crochet work to cast spells! Crochet was mentioned in passing in a variety of fiction stories published in newspapers and magazines throughout the 1930s (see snippets in my various individual posts), and it was also mentioned in the dairies of Anais Nin, but this was the only novel I discovered.

Grandmother Clark’s How to Make Hand made Crocheted Rag Rugs

, 1933. I had no idea that there would be a book about crochet rag rugs from this era. But then I did some more research and found out that there were a lot of patterns for rag rugs, crocheted and otherwise, from this era, which I suppose makes sense since the Depression Era did require upcycling material in this way. By 1936 there were also other patterns for different styles of crochet rugs. 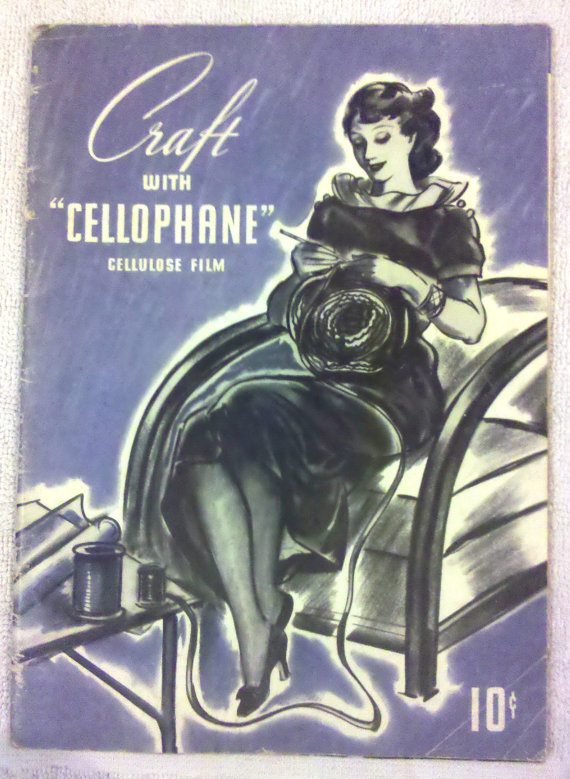 Speaking of upcycling, what about crocheting with cellophane? 1935

The Needlewoman was a magazine that covered crochet as well as the other needlearts. Other magazines of the times included NeedleCraft, Workbasket and Knitting and Home Crafts, all of which I showcased in the 1937 vintage crochet post. Mentions of crochet also sometimes found their way into other popular 1930s magazines including LIFE and Popular Science. 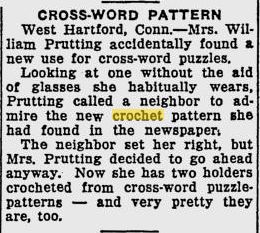 In 1937 a woman was using crossword puzzles to inspire crochet designs! 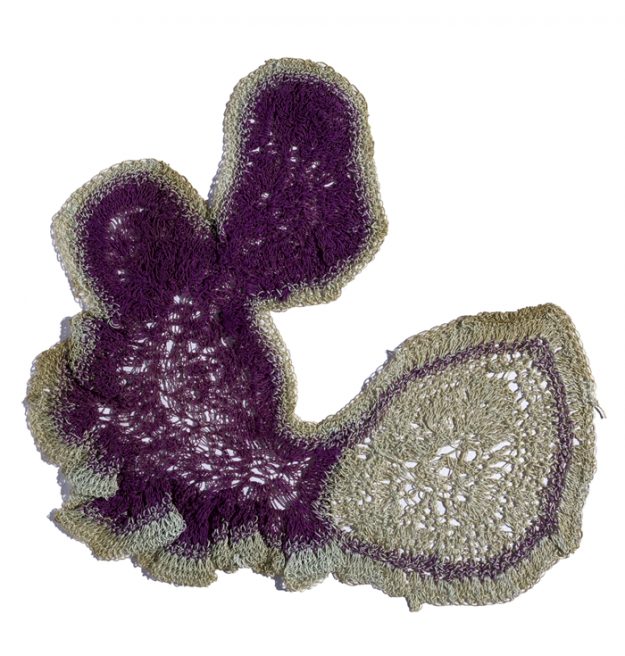 Jeanne Tripier was a French saleswoman who, in the 1930s, close to the age of 60, she “became fascinated by spiritualistic doctrines and divination” “to the extent that she gradually stopped going to work”. In 1934 she was committed to a psychiatric hospital where she spent her time making art, including crochet art. “She considered all her creations to be mediumistic revelations.”

The Cabin Countess recounts the story of Martha Hiestand who started crocheting and knitting for her family in 1939 and turned it into a thriving business with her husband. The business moved from their home to a shop offsite, beginning with just a few employees, ending the decade with close to one dozen and employees and by the 1950s they had 400 employees! Their core product was the “mukluk”, which is basically a sock that has a shoe sole on it.

A 1930 news article said that the best way to finish a knee-length sateen underskirt was to attach a knee-length facing using single crochet stitch with mercerized cotton.

The crochet jabot was popular in the the 1930s. Crochet yokes were also common.

Cloche hats, although often associated with the 1920s, were also popular in the 1930s. This is a 1935 crochet cloche hat pattern. 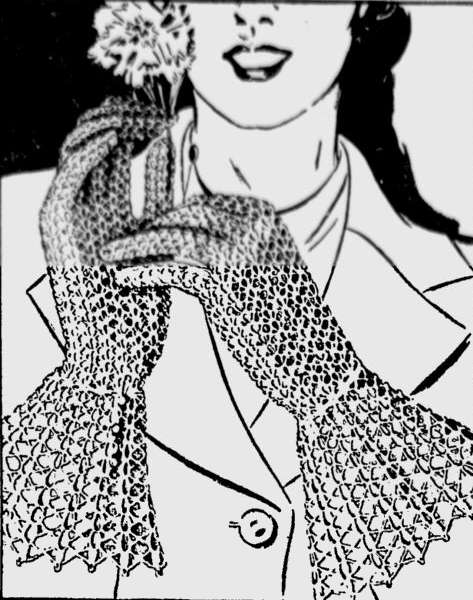 Crochet lace gloves were also popular throughout the decade. These were from 1936.

Crochet News from the 1930s

Let’s look at some of the most popular crochet books of the 1930s, many of which are available as reproductions today.

One of the most popular types of crochet books throughout the decade was pattern books (often, but not always, combining both crochet and knitting patterns) that were published by the makers of cotton thread. This would be like the equivalent of the free crochet patterns on yarn store websites today.

A Complete Collection of Crochet Designs

, and Decorative Ensembles to Crochet 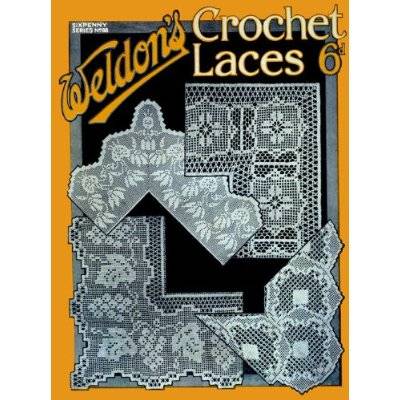 This vintage filet crochet book with 19 patterns in it is believed to be circa 1930.

These crochet books were filled with patterns for children. 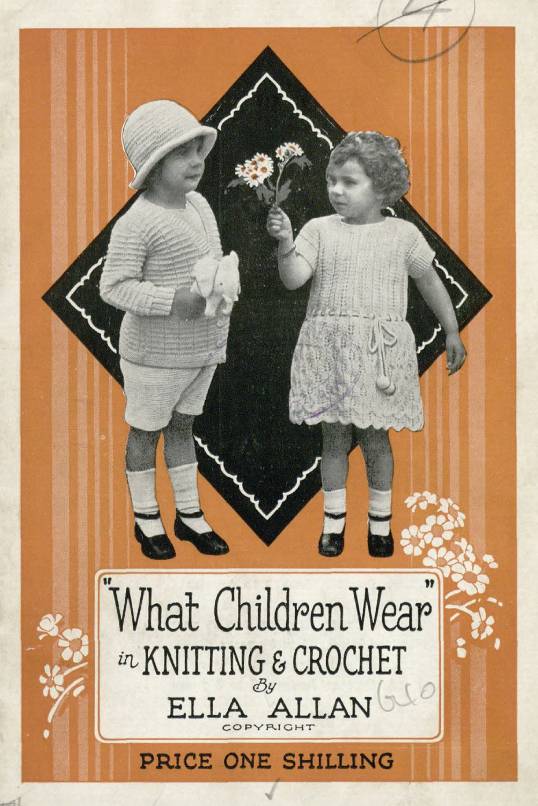 Amy E. Smith and Dora E. Smith created this 1931 baby knit and crochet book. his pair authored several other knit/crochet books around this time as well including one on “toddler woolies” and another on crochet edgings.

Blankets and Other Crochet Pattern Books for the Home

Lux was a brand of knitting and crochet pattern books that started coming out around this time and continued through the 1950s. This is a 1933 crochet book.

. It is described on Amazon as: “A Depression era collection of vividly colorful afghans and throws worked in various afghan stitches, including Tunisian stitch (afghan stitch).”

knitting and crochet fashion book from 1934 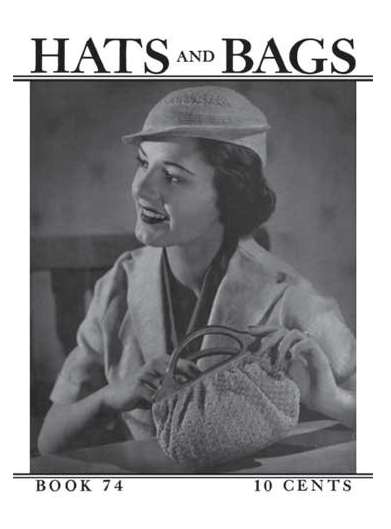 Colorful accessories to crochet and knit, 1937 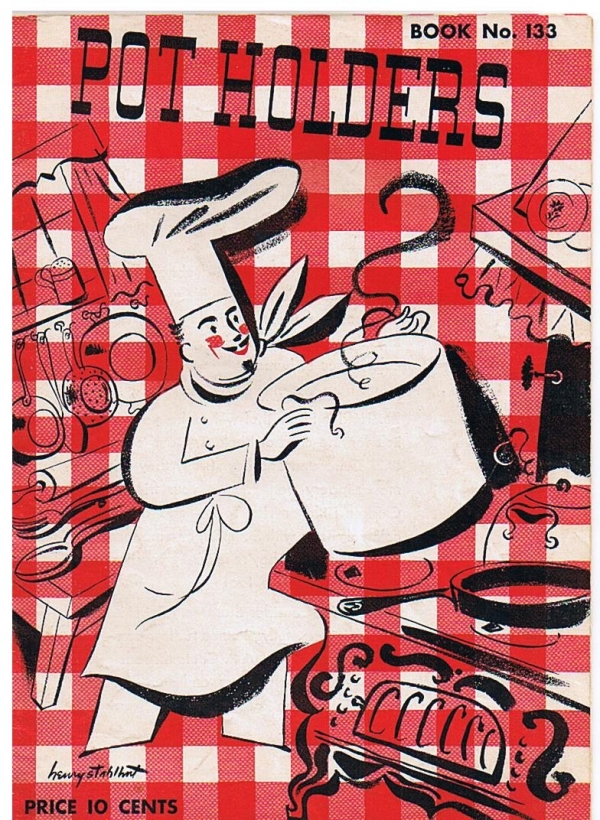 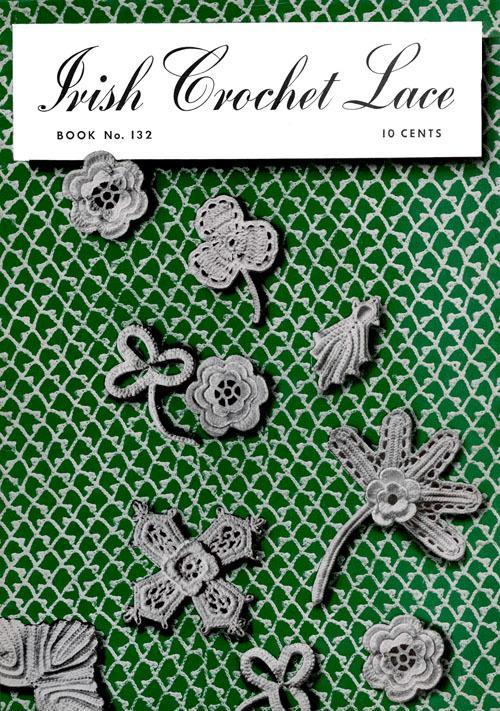 A Little About 1930s Crochet Designers

Some of the popular crochet designers of this time included Mary Card and Anna Valerie. They were submitting designs around this time to various places such as Ladies Home Journal magazine. However, it’s difficult to know if the names that we see on old vintage crochet patterns are actually really names since it was apparently common to use just a few pen names for patterns that were actually produced by dozens of different anonymous crochet designers.

For example I learned from Maggie’s Crochet that: “Alice Brooks is a fictitious name listed with mail order patterns in newspapers starting in the 1930’s. The mail order company felt they needed to have a “pattern designer” listed with the sales information to add a personal touch if they wanted the patterns to sell. These listings appeared as a “reader service feature”, and were not considered an advertisement or a column in the paper.” You can still find “Alice Brooks” patterns today but whoever the original designers were is usually lost to time.

One crochet designer I was able to find some info on was Anne Champe Orr, who started producing various needlework designs in 1915. She didn’t limit herself to crochet designs; she created designs in knitting, embroidery, cross-stitch, lacemaking (including tatting), quilting and rugmaking. She actually originally started by self-publishing these patterns and then eventually she got hired by a number of different companies and publications. Want to know a strange fun fact about her? She actually wasn’t a needleworker herself! Orr passed away in 1946 but there was a huge revival of her work in the 70s and 80s when several reprint publications came out aggregating and sharing her designs.

I also learned that Anny Blatt was a knitwear designer of the time who also had some crochet designs. Her work was popular with some of the elite women of the decade. 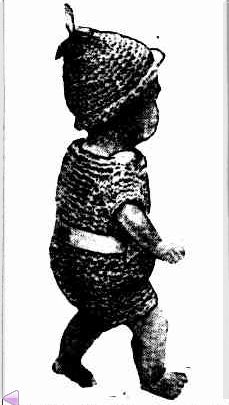 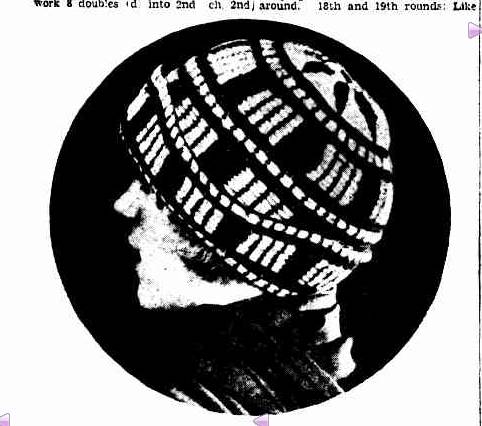 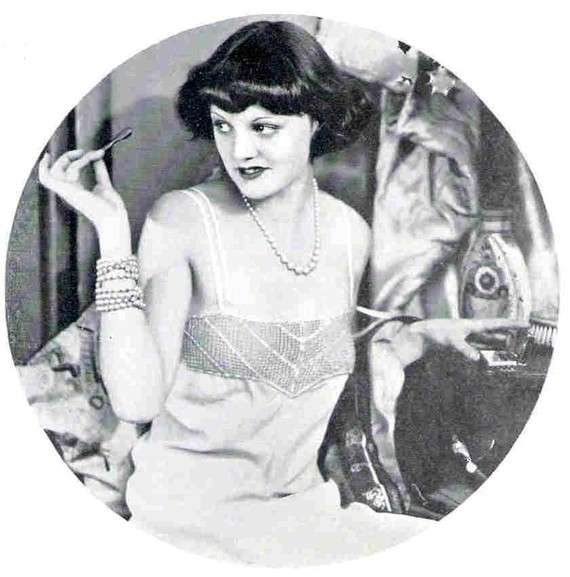 filet crochet pattern for a milk jug cover, which is sold on Etsy by VintageKnitPatterns, 1932 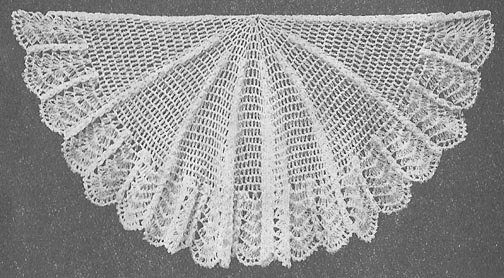 Etsy’s annalaia sells the vintage pattern for this 1933 crochet shawl that is really the classic kind of item I actually expected to see a lot of from this era, even though it doesn’t seem to be as prevalent as I presumed. The same seller also has the 1934 swimsuit pattern shown below: 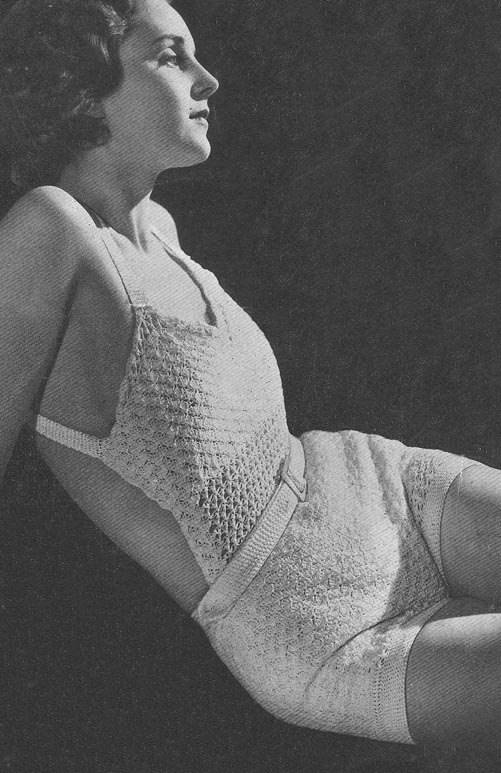 Vintage crochet blouse pattern, PDF sold on Etsy via VintagePatternPlace; I love the open back on this one! 1935 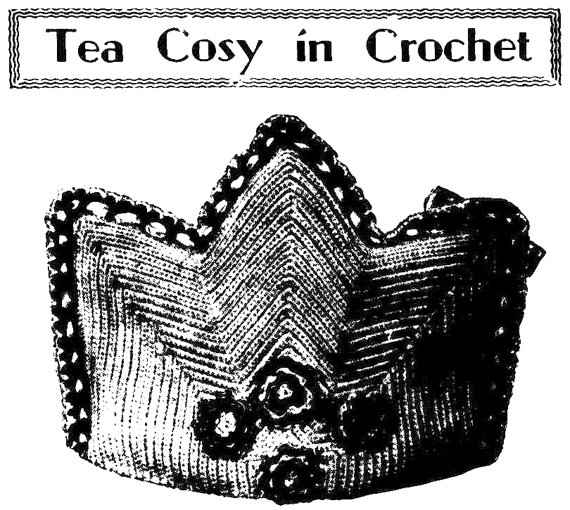 Etsy’s KnittyDebby sells the reproduction of this vintage crochet pattern for a teapot cozy designed to look like a crown, 1936

The PDF of this 1937 vintage crochet jug cover pattern is sold on Etsy by VintageKnitPatterns. This same seller also has some crochet tea cozy patterns from the same year. 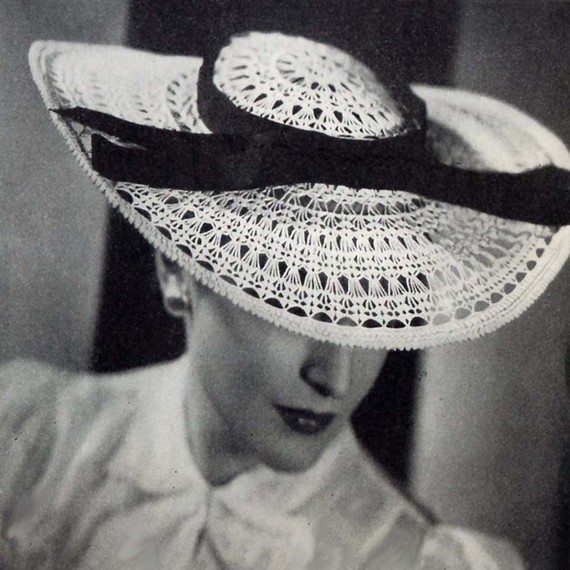 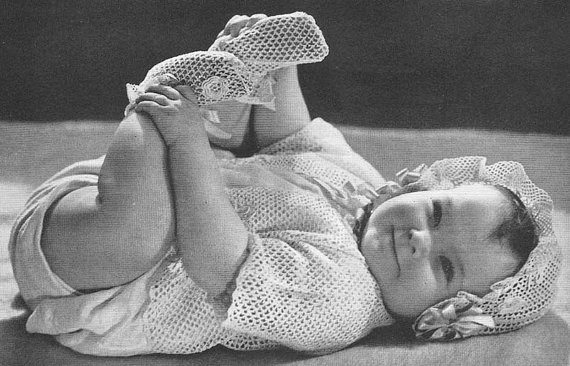 8 thoughts on “Vintage Crochet History: Crochet in the 1930s”