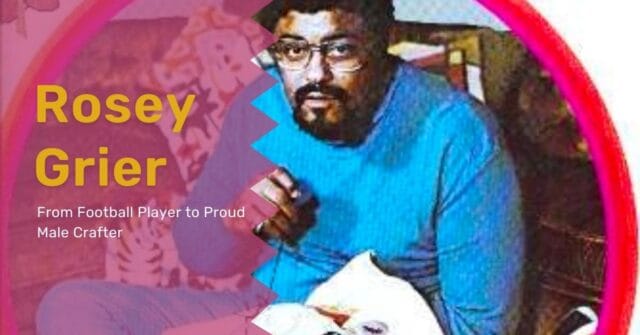 This week I’m taking a closer look at someone who wasn’t a crochet designer, but sparked my interest as a crafter nonetheless.

Rosey Grier was a professional football player who was also known for publishing a book in the 1970s called Needlepoint for Men.

I had to know more about him and soon found out that he’s lived a fascinating life, filled with everything from sports to crafting to philanthropy. 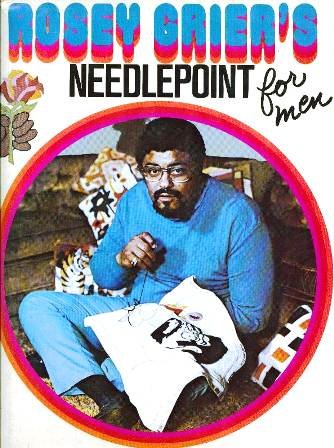 Roosevelt Grier, also known as Rosey, was born in Georgia in the 1930s to a family of 12 children.

Grier ran track and played football at Penn State University and went on to make a name for himself in the 1950s and 1960s as an NFL player for the New York Giants and then the Los Angeles Rams.

As a Rams player, he was one of what was called “The Fearsome Foursome”, considered one of the best defensive lines in pro football history.

This big burly football player was also someone who enjoyed crochet, knitting, and needlepoint, activities he took up in the late 1960s after retiring from football.

On the back of his book, Grier says, “[needlepoint]’s turned into one of the most enjoyable and satisfying things in my life…. if you try it once, you’ll keep on coming back for more.”

Since retiring from the NFL, Rosey Grier has succeeded in many areas. He wrote an autobiography (and several other books including a novel), acted in both movies and TV, co-founded non-profit organizations for urban youth and adults, and has worked as an inspirational speaker.

Grier was even a bodyguard for Ethel Kennedy and took the gun from the hands of Robert F. Kennedy’s assassin, Sirhan Sirhan.

In 1973 Rosey Grier came out with a book called Needlepoint for Men. One online article says: “His passion and enjoyment of crochet, needlepoint, and knitting became a trademark signature in the early days of breaking traditional barriers between the sexes.”

The book is about needlepoint and that seems to be the specific yarn craft that he is most known for, but there are references to just about every fiber art of the era, including macrame.

In an interview with Buster Jones, Grier explained that when he made his love of needlepoint public, he received letters from young boys who had hobbies like playing the violin that they had previously hidden from their friends. Rosey’s openness about needlepoint gave them the confidence to be honest about their interests as well.

Over the years, Grier’s love of yarn craft became well-known. He did a commercial for Miller Lite and another for the Job Corps in which he is working on needlepoint.

While trying to find photos for this post I came across a timeline that the Craft Council has put together showing significant things that happened in the history of crafting during this great decade.

It doesn’t mention crochet specifically, but it’s still worth checking out for an interesting perspective on crafting during the 1970s. Some of the things it mentions include:

My research into Rosey Grier led me to many male crafters who were inspired by him or felt more comfortable openly crafting thanks to his example.

8 thoughts on “Rosey Grier: From NFL Football to Knitting & Needlework”