Although many of the doilies that you see in stores today are made from paper or machine lace, there are still people who crochet doilies by hand. Crocheted doilies were especially popular in the early days of crochet. They were a common home decor item featured on tables all throughout the house. People still use doilies in this way today, and there are also many contemporary ways to display doilies. This article covers crochet doily history, including why it’s named a doily, as well as modern doily uses, alternatives and even doily art.

When people first learned how to crochet, they used mercerized cotton thread and small hooks,  much different from the bulkier yarns used today. Crochet doilies were one of the most common items that people made throughout the first century of the craft. Crochet doilies were primarily made using the basic crochet stitches, although later they would also include textured stitches such as crochet bobbles.

Crochet doilies were seen all throughout Victorian homes in the 19th century. Junkbox Treasures shares,

Crochet doilies continued to be common in homes throughout the first several decades of the 20th century. They were considered a part of household etiquette in many homes. A lunch table was not considered properly set if doily placemats were not part of the setting, and the finger bowl was often placed on a doily as well. Notably crochet doilies were something you would see in a middle class or upper class home.

Junkbox Treasures also shares that the doily was an important part of a thing called a Tussie Mussie. This was a bouquet of flowers and herbs that was wrapped with a doily at the bottom. Although you might not have heard that term before, it’s certainly possible that you’ve seen flower bouquets with doilies; they are especially common in wedding crochet.

“WHEN YOU LOOK AT A DOILY, WHAT DO YOU SEE? A CURIOUS PIECE OF LACE? A QUAINT DECORATIVE ITEM FROM DECADES AGO? AN EXAMPLE OF DILIGENT WOMEN’S WORK? I SEE ALL THAT AND MORE: A JEWEL-LIKE DESIGN THAT COMBINES BEAUTY AND MATHEMATIC COMPLEXITY, A WINDOW INTO THE MINDS OF OUR NEEDLEWORK ANCESTORS, AND A CLUE TO PAST LIFESTYLES.”

When crochet doilies were first created they were often called anti-macassars. That’s because they were placed on the backs of chairs to protect the furniture from the Macassar oil that many men used in their hair at the time. In the early 18th Century there was a company brand-named Doily that manufactured linens, and it is believed that the name for the object was derived from this popular brand (similar to how most people today will call tissues ‘Kleenex’). It is also, possible, however that the name Doily actually comes from a different name: the D’oyleys. There are several variants on the spelling and the original reason for naming this item a doily isn’t entirely known.

How to Crochet a Doily

A crochet doily is usually round (although it can also be oval, square or rectangular), and it is typically worked in the round as a circle. There are countless crochet doily patterns including many terrific vintage patterns as well as new patterns coming out all of the time. Here are some basic tips for crocheting your first doily: 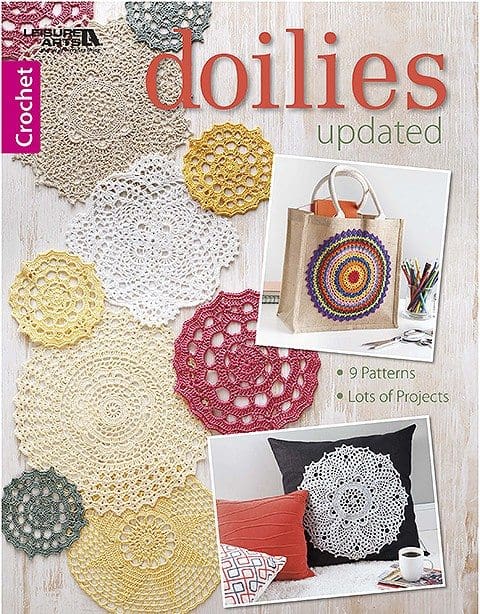 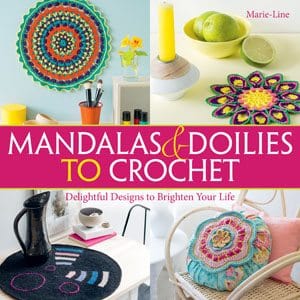 Mandalas and Doilies to Crochet shows that crochet doilies can serve as beautiful decor in contemporary homes.

As you look for crochet doily patterns, you may discover that many of the recent patterns are called crochet mandalas. A mandala is a round crochet pattern very similar to a doily. The main difference is that a mandala is often worked with intentionality as a tool for mindfulness crochet (although that doesn’t necessarily have to be true). In practical terms, a crochet mandala and a crochet doily are the same thing: a (usually) round, flat, crochet circle worked in the round and used as home decor. Today’s crochet mandalas are often very colorful, whereas vintage crochet doilies were typically white or cream in color and mandalas are often worked in yarn instead of thread.

Some people are simply turned off by the idea of making a “doily”. They equate it with something old or fuddy-duddy. That’s a shame, because we should really be honoring all generations of our craft and celebrating the beautiful, intricate work that came before just like we appreciate the bold, colorful crochet of modern times. That said, if you don’t like to say that you’re crocheting doilies, you might find that you feel perfectly comfortable telling people that you crochet mandalas instead.

Etsy’s Rubypearl calls this the Alice in Wonderland dress

Sewing together vintage doilies to make a dress is one of the most popular, and most creative, ways to upcycle doilies. Crochet doily dresses have been featured in weddings and proms, although there are plenty of simpler styles that can be worn everyday. 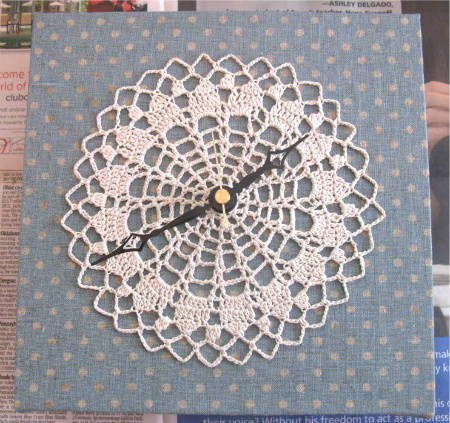 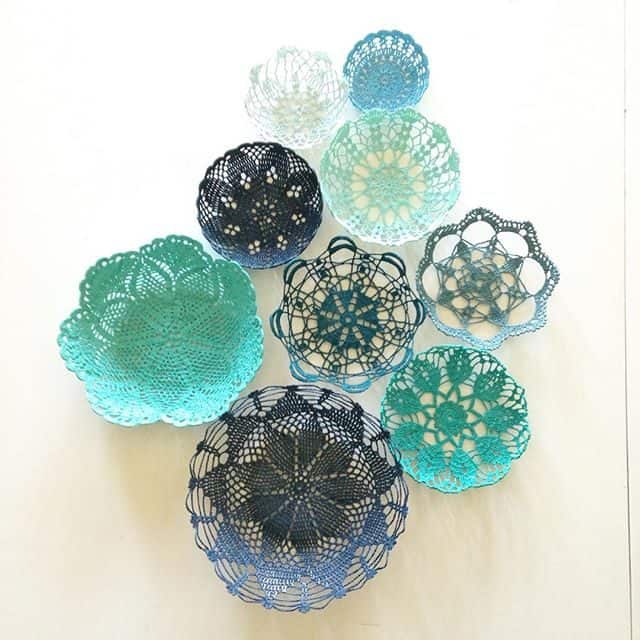 Maillo is one of the most creative and prolific makers of upcycled doily items. They range from bowls and vases to pillows, hanging art, framed hoops and even mobiles. 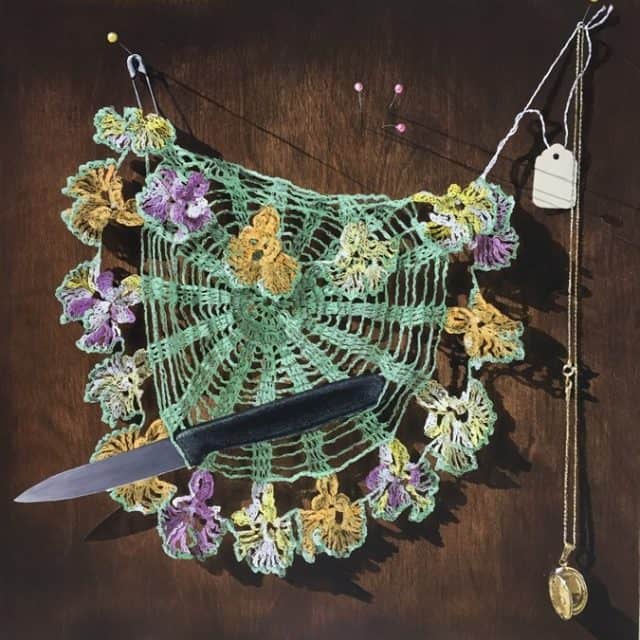 Upcycled crochet doilies are their own form of art but they aren’t the only way that doilies are used in art. In fact, crochet doilies are one of the most popular forms of crochet used in contemporary art. One of the main reasons for this is that the doily is such an easily-recognizable symbol of women’s domestic life. As such, artists who want to make commentary on this topic, will incorporate doilies into their work in interesting ways to reflect varied beliefs about a woman’s place in the home, the value of domestic work, etc. For example, Lindsay Arnold – who does painting of doilies – says, “Domestic life provides an abundance of miscellaneous items existing only to make things look nice.”

One of the most interesting projects using crochet doilies is The Doily Heritage Project by Textile Fusion. This is a collection of photos of vintage doilies alongside stories from the makers or their family members. This represents an amazing curation of the role that doilies – and crochet generally – played in the lives of women in the early 20th century. Crochet is a craft that has been passed down through the generations, often through the women of the family, and this is seen in many of the stories that are shared as part of this project. The project included a 2017 exhibit of the work. 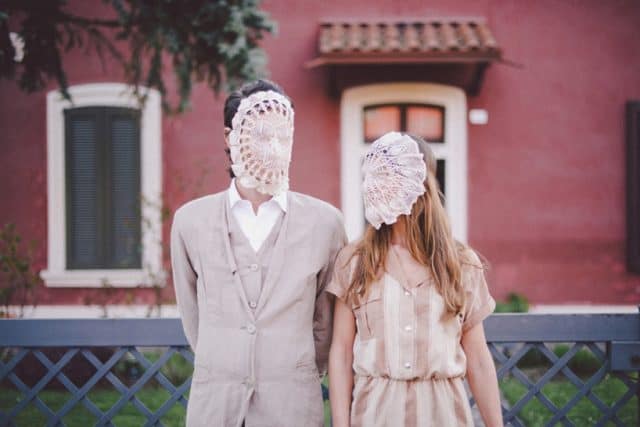 One way that women express feminist concerns about the “role of woman in the household” is by putting cheeky, raunchy or provocative sayings on pretty household items. We see this a lot in subversive cross-stitching, but you can also find it in crochet. Laura Mappin is one artist who makes cheeky doilies. 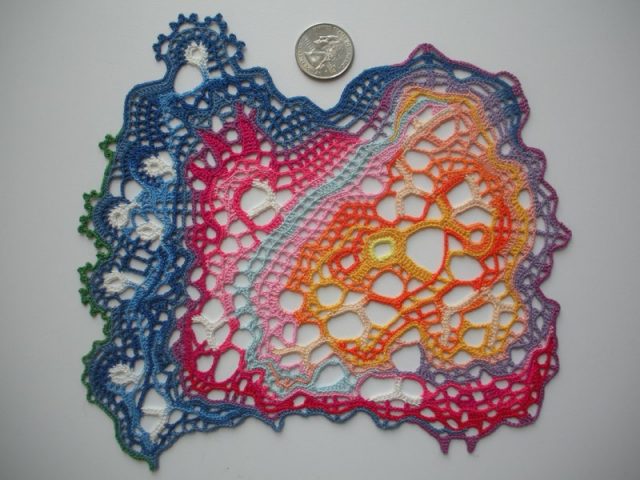 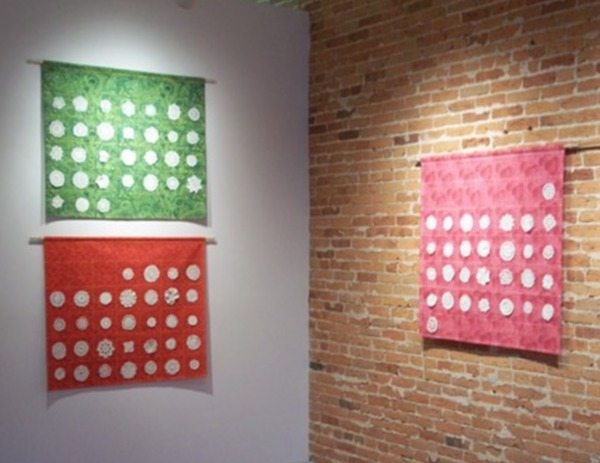 There are several artists who incorporate crochet doilies into mixed media art including ceramics. The doily is imprinted into the ceramics to create a pattern. For example, Shannon Donovan uses this technique to explore the beauty and artistic possibility of everyday domestic household items. She also created a 366-day calendar making one ceramic doily per day and hanging them together on fabric. Urban artist Nespoon has also worked with ceramic doilies. 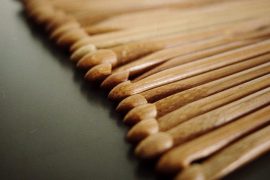 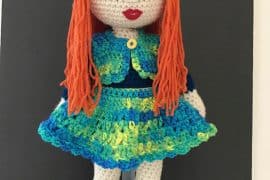