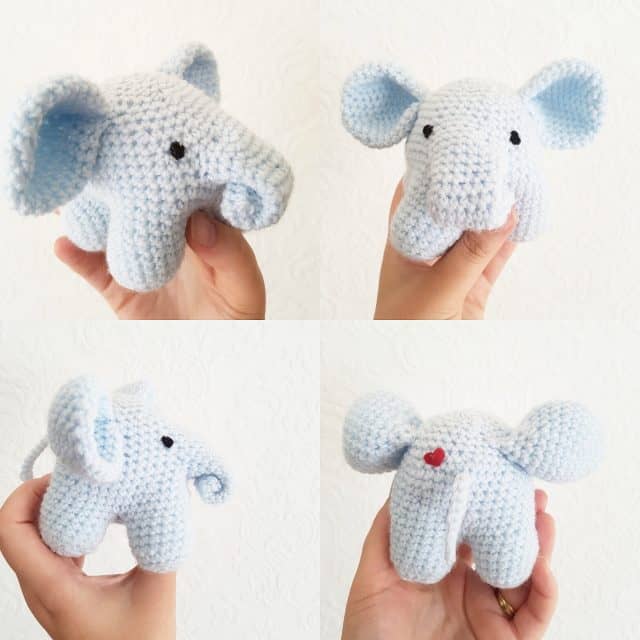 Part of my Endangered Animal Crochet project is that I’m accepting submissions from people who have crocheted animals that are endangered and want to share them here on the blog. This submission of an elephant comes from Caitie Moore who shares more about her experience with crochet and why she wanted to share this for the project.

When and how did you learn to crochet?

I was about 9 years old and learned how to crochet in my school sewing class. My first project was a little knee blanket made up of red, white and blue granny squares. I still have the blanket today, more than 20 years later!

What is the story behind making this crochet animal?

I’m from Africa – born and raised in South Africa, and I’ve been very fortunate to see elephants in the wild. They are the most amazing creatures. Even though they are huge (and they are even bigger up close in real life!) they are one of the most graceful and majestic creatures. They also have a very strong sense of family, as do I. I’ve always had a fondness for elephants, and so decided to crochet one as a baby gift for a new baby in the family.

Why are you participating in the Endangered Animal Crochet Project?

I’m a zoologist by training, and I’ve always had a passion for animals. I also happen to love crochet! I never expected two of my passions to collide so elegantly, but thanks to this project, they have!

What do you want people to know about the importance of this animal / endangered animals?

Elephants form an important part of the eco system in which they live. Believe it or not, but lots of animals, insects and plants depend on elephants to survive. For example, in the dry months, elephants use their tusks to dig for water in dry river beds. If the elephant was wiped out, then many other species would follow. They are also crucial for tourism* and generate much of the money required to fund conservation efforts.

* not all elephant tourism is good tourism! Many elephants in Asia are kept in very poor conditions and are mistreated. Definitely not something I support. I am referring mostly to the elephants that can be seen in wildlife sanctuaries and game reserves.

What else, if anything, have you done to help endangered animals?

As mentioned before, I studied Zoology and spent 5 years doing scientific research on various mammals and contributing to the body of knowledge required for conservation efforts. I’ve also volunteered with various local organisations to assist with animal conservation as well as contributed to these organisations financially. I also make an effort to live a more sustainable lifestyle (e.g. conserving water, recycling, using cloth diapers on my baby, etc) so that our environment has a chance to survive a little longer.

If you could change one thing for the animals of the world, what would it be?

Gosh, that is a tricky one. I think the main problem for animals is humans! We have such a negative impact on the earth. Do you know that we are the only species who actively destroys its own habitat? While I love technology, it so often has a disastrous impact on animals. I guess if humans could be more compassionate we would make decisions that don’t affect animals and the environment so negatively.

What benefits has crochet offered to your life?

I love working with my hands and I find crochet to be an amazing stress relief. It’s also a fantastic creative outlet that I could not do without! And on top of that, I get to make special, one of a kind gifts for friends and family.

Where online can we find you?

The Sumatran Elephant is a critically endangered species. The Asian Elephant and Sri Lankan Elephant are also endangered. The African Elephant is vulnerable. The elephant will be featured soon in the Endangered Animal Crochet Project to raise more awareness about them.