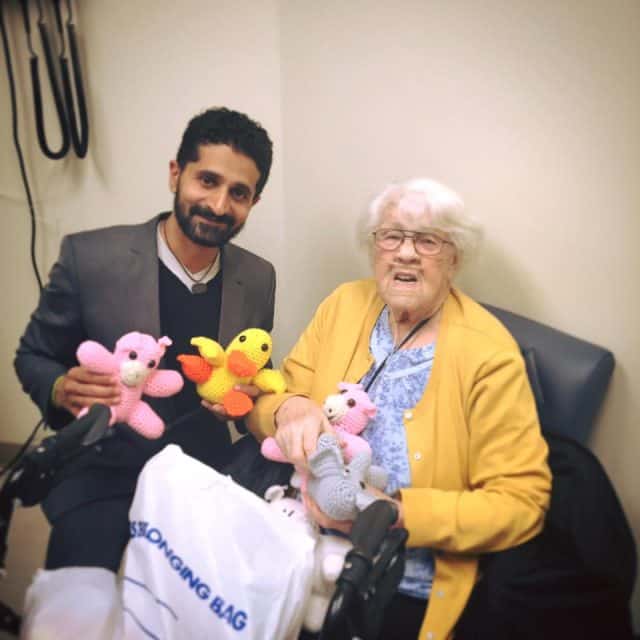 I’ve been doing research into crochet around the world, seeking to highlight the work of crafters whose backgrounds / beliefs may cause them to be impacted by recent political issues in the United States. In doing so, I came across this sweet HuffPo story from back in 2015.

The story is from a Muslim doctor, originally from Pakistan and now living in Idaho, with a patient named Louise who reached out to him to bridge the cultural gap. He shared on Facebook:

“So My 91 yrs old patient heard how #Trump has been attacking “me The American Muslim” so here she brings me these little stuffed animals that she Crocheted herself to cheer me up! And she #MadeMyDay”

The doctor had spoken on a radio show and Louise, who has dementia, heard him speak. HuffPo elaborates,

“Though she didn’t know who Trump is, she felt the presidential candidate’s ideas were hurtful. So when the patient, who happened to have an appointment with the doctor that day, arrived to the office, she gave him the five stuffed animals and also offered him some words of support.”

The HuffPo article has some really touching sentiments. After this photo went viral last year, Rahim reached out to Trump with an invitation to come meet him and Louise; as far as I can tell from online that invitation was never accepted. The photo was taken by Louise’s granddaughter; Rahim said,

“It really connected with me that this is the true American spirit. … I wanted to share it because it brought so much comfort to me,” he said. “I knew so many of my friends and family members were hurt by these issues, so I just wanted to share that belief in humanity is not gone. That this white, 91-year-old woman can still connect to me on such a simple way. I’ve been telling her she’s now one of the most beloved grandmothers in the country.”

In an interview with CBS news, Rahim said, “I’m her doctor, but she’s the one who healed my wounds.” Crochet is just one way that we can reach out, human to human, to connect with one another in difficult times.