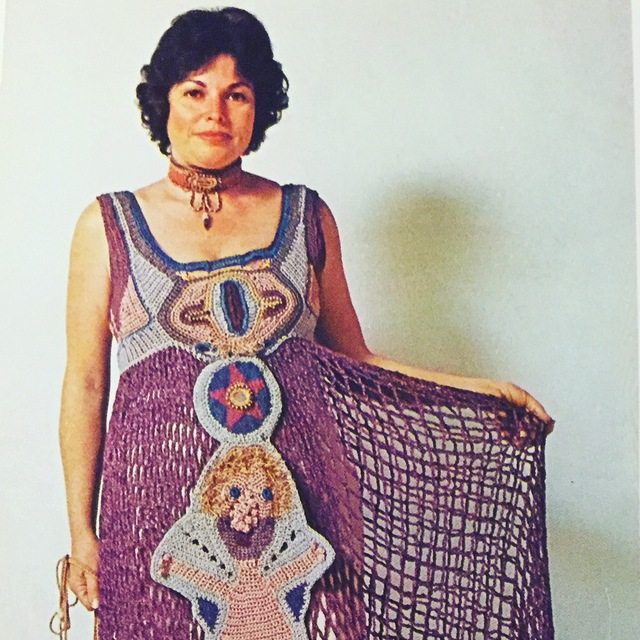 When I did my post for International Women’s Day, I mentioned that I was especially inspired by the work of 1970’s crochet artists who worked hard to bring legitimacy to crochet and other domestic arts and elevate them to the status of all fine art. One designer from that time is Del Feldman, who I profiled as part of my series of posts from designers in this area. 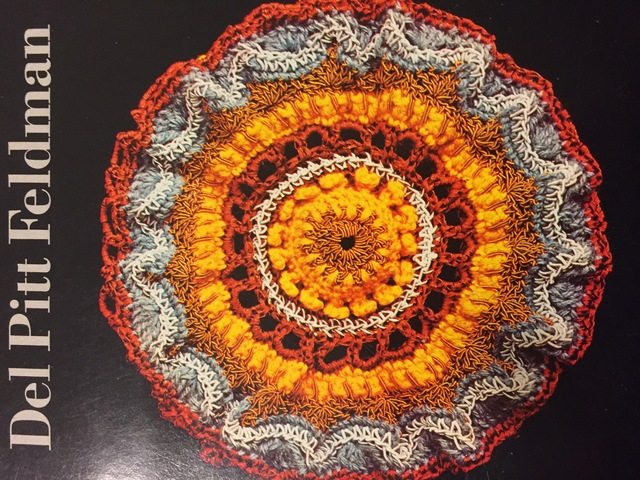 When I did that post, I mentioned that she had a book called Crochet: Discovery and Design

, but that I hadn’t been able to get my hands on a copy. Recently, a wonderful woman I don’t know contacted me to let me know that she had seen that post and that she had a copy of the book and would generously gift it to me if I was still interested in it. Boy, was I. I never fail to be amazed by the beauty and kindness of the online crochet community including this example. 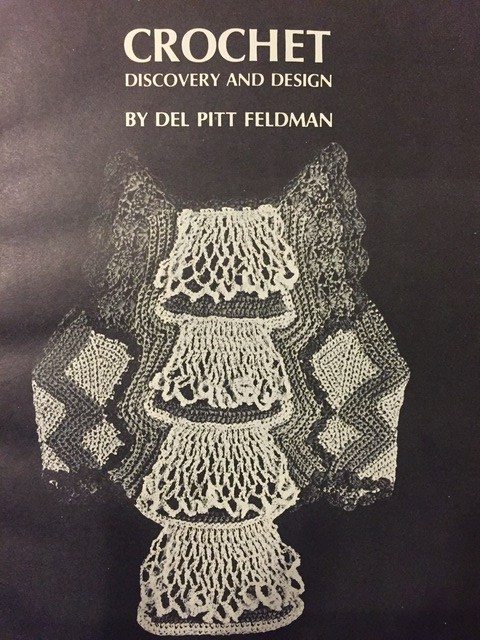 When the book arrived, the first thing that I noticed was that the cover image looks just like a crochet mandala! I can’t remember now if I’d ever seen the book cover before now, but if I did, it was before crochet mandalas were popular and way before I launched the Mandalas for Marinke project. But after my initial surprise at the book’s cover, I realized that it didn’t surprise me at all, because the piece is so artistic and beautiful and this is exactly what Del, and many of the other designers from that time were doing as they pushed the envelope in crochet. 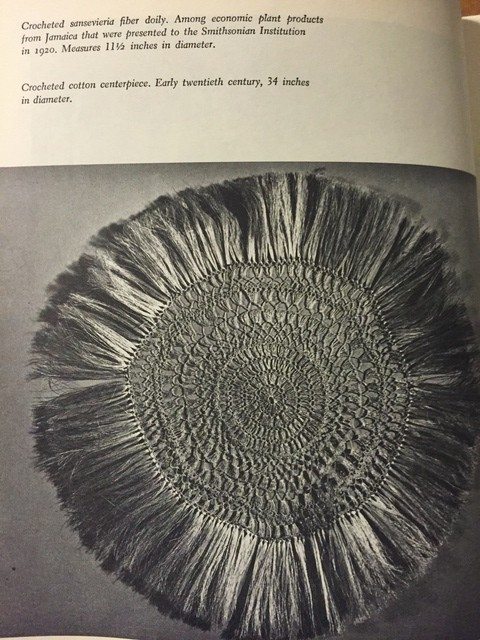 What I love most about this book is how it encourages the reader at every turn to learn the basics of crochet and then abandon patterns and run with the craft. I’m not saying that there is anything wrong with following patterns. I, myself, don’t use them much, but then I also tend to make the same things over and over, especially large granny square blankets (and more recently basic double crochet mandalas). I think crochet patterns are great, and I’m glad they exist in so many forms, so that we can learn how to make many different types of things. But I also think that they can be limiting for people who are afraid to deviate from the pattern. As anyone who is familiar with Hook to Heal knows, I really believe that you can go further with the creativity components inherent in the craft and use them to heal and grow. And Del was all about this, as we see from this book. 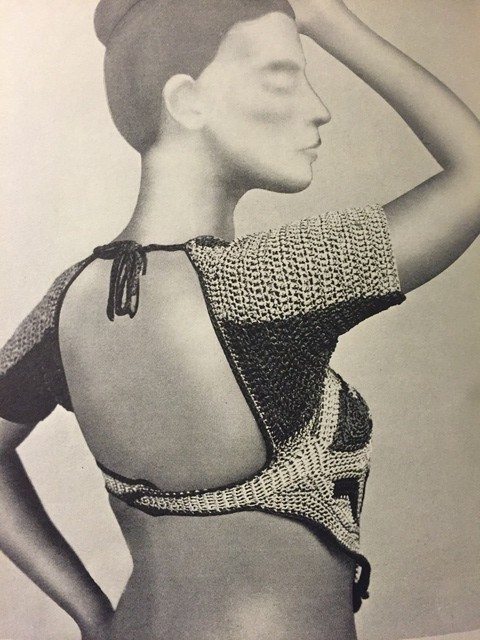 Choli by Arlene Stimmel in Discovery and Design

After all, the subtitle on the cover of the book is, “an innovative craftswoman shows you how to design and create new fashion artistically – without pattern”. And then in the introduction she writes,

“Up until now, crocheting has been taught by using definite patterns and stitches, but I believe you must be free of all these preconceived patterns, which are just copied, in order to truly create. Once the basics are understood, you can be the master of your design and find that flexibility is the key to success. Let’s start with a clean slate, a new approach, which has been used in free hanging sculpture but is also a concept in clothing.” 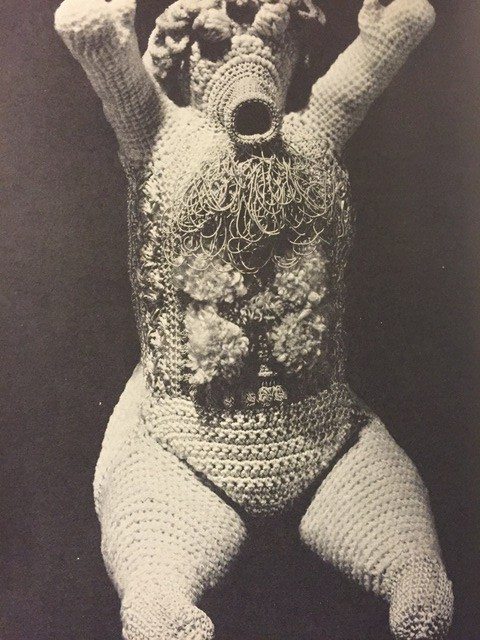 Now, I want to say that I don’t agree that following a pattern is just copying or that you can’t truly create when following a pattern. I fully believe that each crochet item that comes off of your hooks is unique, informed by your own influences and style, and that your entire body of crochet work over time is one of a kind. I believe that you can opt to never deviate at all from a pattern and you are still creating. That said, I think there’s huge value in what Del has written here and in the concept that after learning the basics is it playful, productive and purposeful to try your hand at altering them and coming up with your own designs. 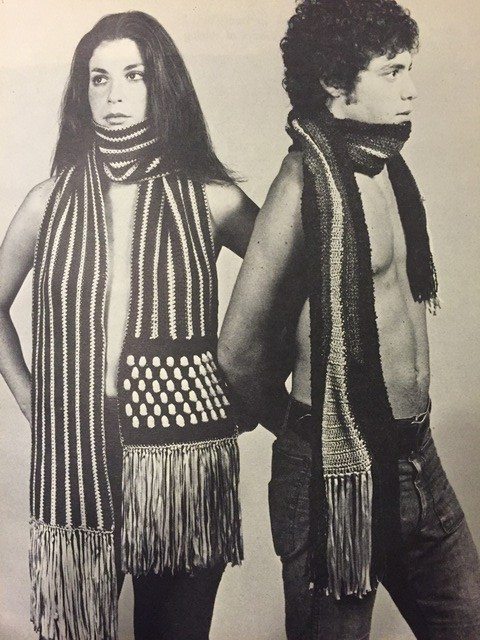 Discovery and Design does teach you how to crochet. As Del writes,

“In order to learn to be free, it is still necessary to understand the basic concepts and have some discipline in creating basic forms and achieving uniformity of tension. Very important, too, is the ability, when needed, to follow old pattern stitches as part of your design. With every art form the study of age-old principles and the technical mastery of them is important in order to give the freedom needed to go in any direction you wish with an underlying intelligence of form.

Del goes on to recommend that you “get a knowledge of basic stitches” and techniques and “then blow your mind free and experiment.” 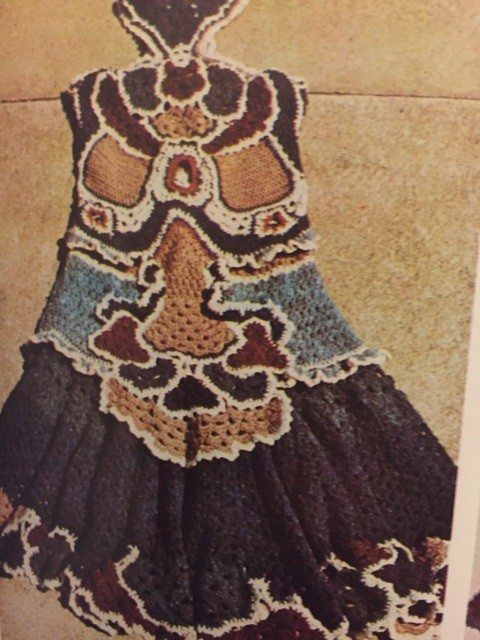 I love this. And I’m certain that it was this attitude that allowed the crochet artists and designers that were working around her at the time to be able to push the boundaries of what crochet could be in such a major way. We see the work of some of these designers in Discovery and Design including work from Janet Karpeck, Janet Lipkin Decker, Jean Cacicedo, Arlene Stimmel and Sharron Hedges. 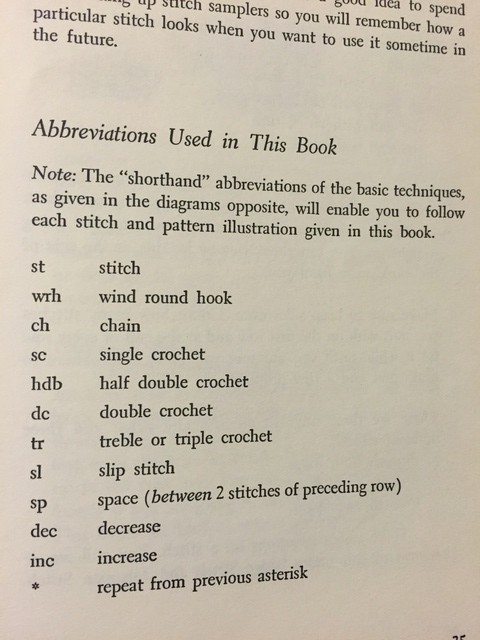 Notably, it was also really fun to look through the “basics” in this book because of course they are mostly the same as they are today but there are a few small differences. A few of the abbreviations we commonly use have changed; what is currently “yarn over” was “wind round hook” and what we abbreviate hdc was hdb at this time. And the stitch patterns that we currently currently just call sc, sc flo and sc blo are called rose stitch, albanian stitch and ridge stitch in this title. It’s just fun to look back at that history and see these small shifts.