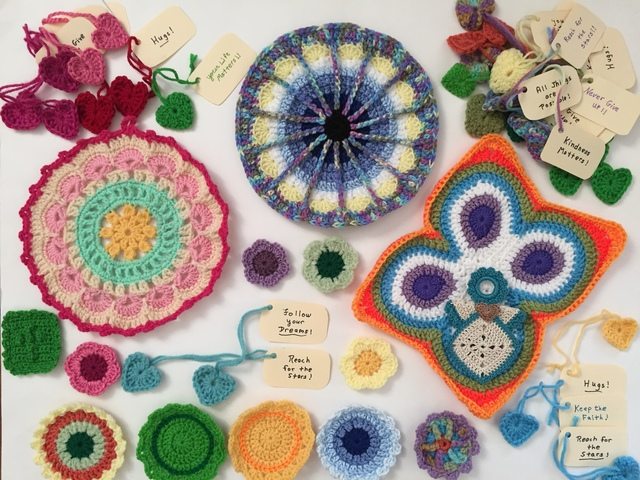 Today I’m really happy to share a special contribution to the Mandalas for Marinke project, which comes from Fran who shared her touching, important story with us in my book Crochet Saved My Life (where Wink’s story was also first shared). In this post, we look at her beautiful crochet and learn more about her story and what it’s been like to live through trauma.

(Trigger Warning: There are no graphic details but Fran lived through a brutal rape so some people may need to exercise self-care when reading this post.)

“This was my first time crocheting mandalas, and I chose the ones that I made for a reason. They are each made using Wink’s crochet mandala patterns. 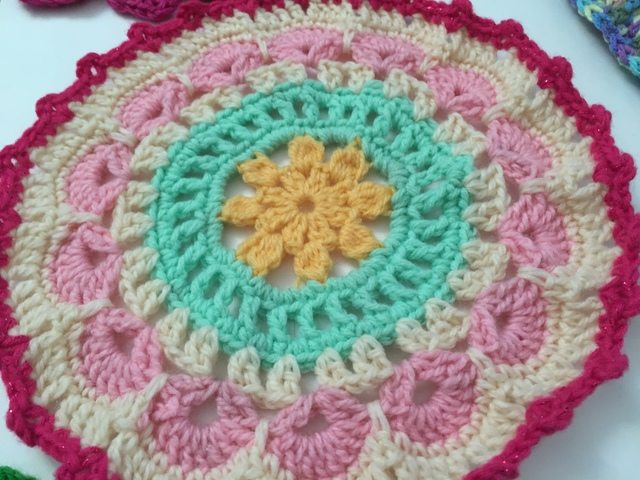 The first mandala is Picots and Petals, which I chose to get familiar with the terminology of making a crochet mandala … and also because I was attracted to the pink color. 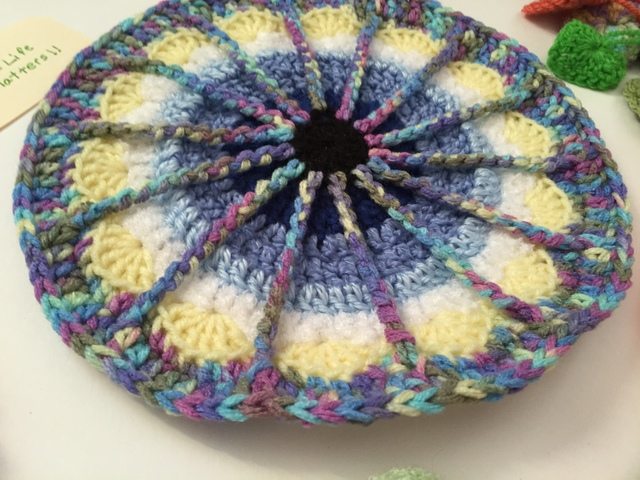 The second, The Spoke Mandala, I chose colors for thoughtfully with Wink in mind. In her last blog post, Wink said that she was in a dark place, trying to get to the light. So, I started with the black, going outward toward the light, with white for soft, white clouds, yellow for the sun, and on to the rainbow. 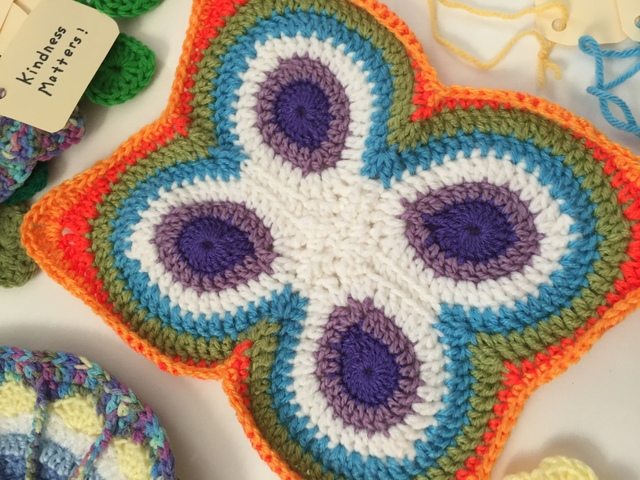 The third mandala, Wink’s Peacock Butterfly, was a challenge for me to do, as I was dealing with my own depression and PTSD. But I had to try to make this because Wink herself said about it, “if you can make this, you can do anything”. And it was so special for me. I haven’t been able to focus on detailed patterns before now, but doing this for Wink encouraged me to try … this butterfly, as I pictured Wink flying up to heaven …

It just seemed fitting that these three mandalas were the ones to make, in the order that I made them. My doctor gasped when he saw my spoke mandala; both he and my psychiatric nurse knew right away what I was trying to say with it. 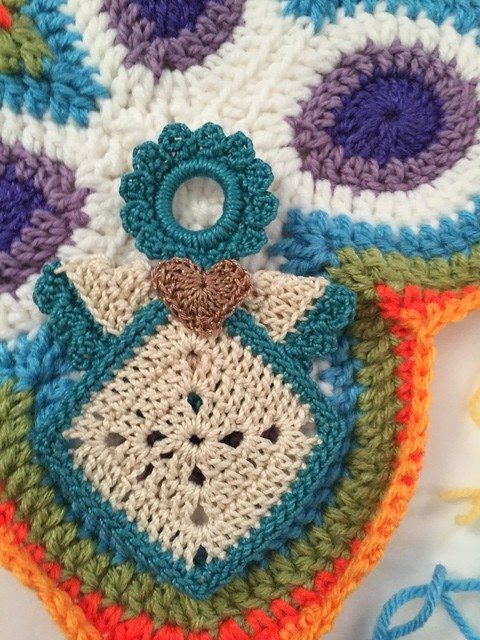 I also made an angel, too, because Wink is an angel now.”

Note: Fran’s crochet angel inspired my recent angel Christmas ornament tutorial, and even used one of her mini-mandalas for the head on this angel. It will go to a special portion of the Mandalas for Marinke project.

Fran adds: “I learned new stitches from making Wink’s mandalas, including the beginning loop, the standing dc, and more. Wink isn’t here but her patterns and tutorials live on. She doesn’t know the impact she has made to so many crocheters around the world.” 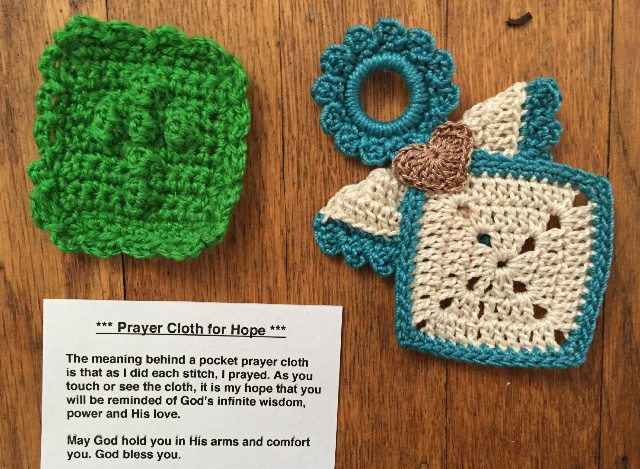 Fran contributed some of her small prayer cloths to this project as well, which was very special. She makes and donates Prayer Cloths to her church’s food pantry. She has also donated some to families of tragic circumstances, including the families of slain cops, and she has had blessings done by her pastor for some of these. You can get a sense of why she does this kind of charity crochet work from something she said in her story in Crochet Saved My Life:

“I remember when Sandie had crocheted me a beautiful prayer shawl after I was raped. I cannot put into words the comfort that that shawl has brought and brings to me to this very day. I hope that the teal scarf will do that for some other victim as the prayer shawl has done for me.” 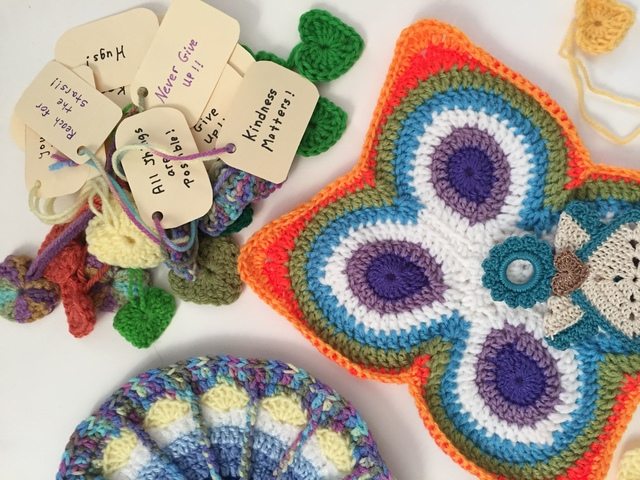 Let me tell you a little bit more about Fran, in her own words, and then I’ll share the writing that she included for this project. She shares:

“Besides having fibromyalgia, I am a rape victim survivor dealing with PTSD, depression and anxiety; this is the story that was published in Crochet Saved My Life. I still hope to have an Etsy shop. I want to have a blog (with my crochet and other crafts – and to help other somehow from what I’ve been going through). Maybe I can even have a book in the future … if I can make it past the struggles that a rape victim goes through. I really want to make a difference.” 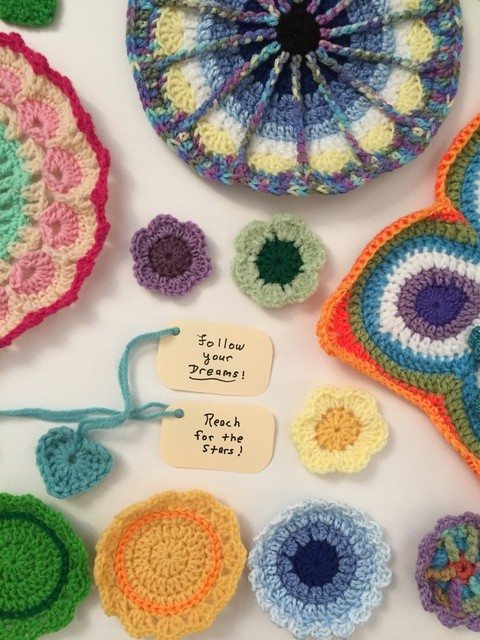 Fran has had a long process of recovery, which is to be expected with the kind of trauma that she survived. She has used crochet to help her all throughout the process, and she really, really wants to help raise awareness about depression because she has experienced the pain of not feeling understood. Here is what she shared with us about her own journey for this project in the hopes that it will help increase understanding around trauma-related depression:

“Crocheting … the repetition calms you.

When making Wink’s Spoke Mandala, I tried to use the colors that showed Wink was trying to reach the light but couldn’t … going from the darkness, slowly towards the light, and to a rainbow … but, as too many of us know, out is hard to stay in the light in many of the situations we deal with.

A lot of people don’t realize how depression can affect us. For me at times I feel like I am in a deep, dark ditch, and I can’t get out to the light or to see a rainbow. 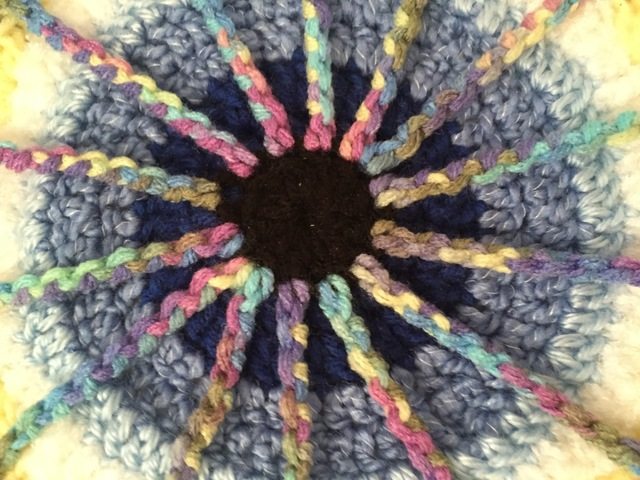 I dealt with a brutal rape and trying so hard to get justice for myself in that situation, which was difficult to do, having both fibromyalgia and PTSD. I was motivated because I also wanted to get justice for others. I wanted to make people aware of the struggles that a rape victim goes through, especially when dealing with a criminal court case.

It was hard because there was a constant rehashing of what happened to. I became bedridden/ homebound. The PTSD was constantly repeating what had happened to me against my will. The system made me feel like it was always there, and I felt totally pulled apart. 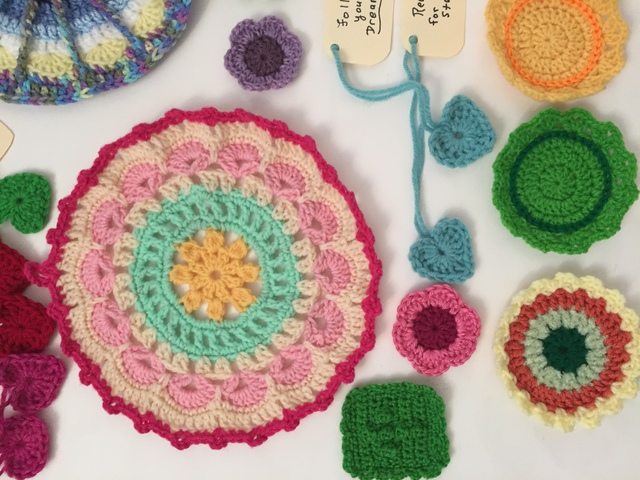 I became quieter than I normally am. I didn’t want to talk to anyone, especially to any man. To this day I still don’t want a male in my room unless there’s a homemaker or another woman in the room with us.

I dealt with so much during the criminal case and sentencing. Then after that I and to go through the civil case. Again, your personality and everything is pulled apart again, where you’re the victim but people don’t realize the struggle you go through. It’s more constant re-hashing. I can’t see beauty anymore; I used to but it’s hard getting it back. 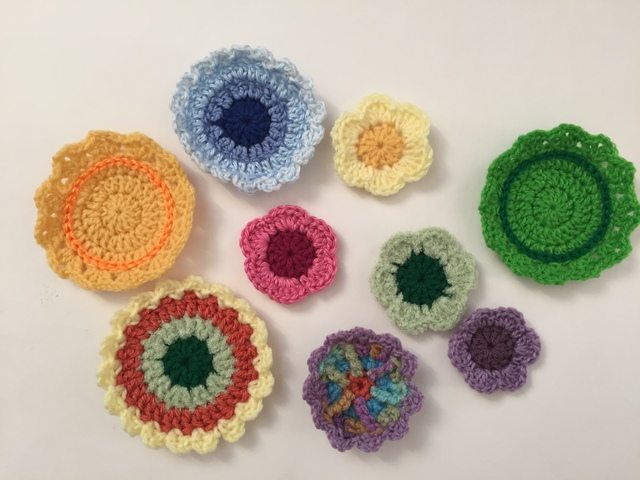 My stomach is always in knots. It is still hard to eat. I lost more than my virginity with the rape … all of my dreams and goals came to a crashing halt. I lost more than seven years of my life to the court cases, to PTSD, to trying to heal.

People have told me to move on, that it’s over. They don’t realize that it’s not that easy for me. I basically isolated myself in my room, developed a phobia to even go out to my kitchen when I’m strong enough to actually get in to the wheelchair. This phobia is hard, too.

I’ve also realized that colors are affecting me, too. I’m having a hard time seeing real beauty. It comes and goes, and it affects my mood. I like pink. I’d painted my room pinkish/ purple, notching that color definitely changes my mood.

And space is different now. My room is like two small rooms together as one room. I had put a curtain in between my room to make it too small rooms. I wanted and still want to have things really near to me. The psychiatric nurse and doctor have suggested that I slowly start to make my room into a bigger space. I took the curtain down, but it’s caused panic attacks, anxiety, which people don’t understand. It scared me, to see that much space in my room, causing panic, nightmares, flashbacks, wanting to be alone, crying into my pillow when re-hashing things again.

People need to be aware of depression, and triggers, too – as people don’t watch what they say and it can trigger a depressed person. Words can be mean. It’s happened to me.”

Fran also contributed a sympathy card for Wink’s family, reminding us all that this project is a small reflection of just how many people loved her, admired her and were inspired by her work.