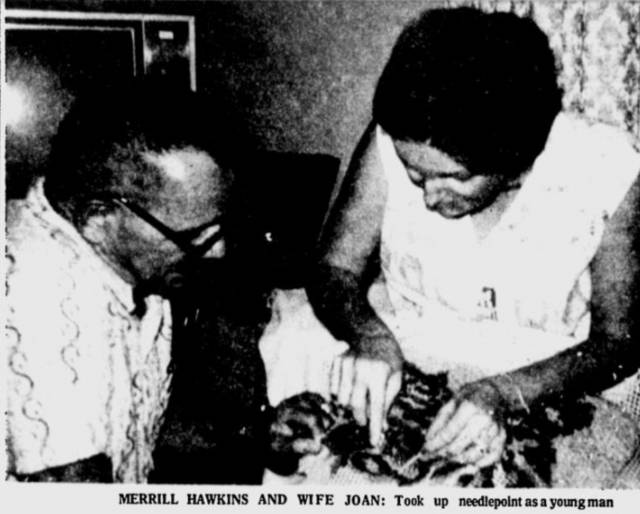 Things have come a long way in terms of awareness about crochet as a health tool. There wasn’t a lot of information available when I first researched the topic a few years ago during the writing of Crochet Saved My Life

. It thrills me that so many more people are writing about crochet health. The awareness might be relatively new but crocheting to heal isn’t new at all and I’m always excited when I see references to it in articles from the past. For example, I learned about crocheter Merril Hawkins from a 1974 article in the Ocala Star-Banner.

Brooklyn-born Merril had to drop out of high school in 1937 because of a terrible bout of rheumatic fever. That was when he learned how to crochet. His mother taught him the basics and his sister helped by sewing rags into strips to give him something to crochet with. Later he learned thread crochet and started making crochet doilies and other items for the home.

The article doesn’t explain how crochet helped him during this time, but from my own research into the benefits of crochet I can guess that it might have offered:

Merril wasn’t the first man in his family to take up a craft through the process of healing. As of the time of the article, he still had an embroidered American flag that his own father had handcrafted in 1912 during a time when he was also bedridden with a serious illness. The article makes reference to Rosey Grier, the football player who was well-known for his handiwork in the 1970s.

The article doesn’t explain much about Merril’s journey with crochet, but we do learn that he served in the military and then spent more than two decades working for the police force. He has also worked as a volunteer firefighter. I would love to know if he crocheted through the stress of those experiences! We don’t know that, but we do know that in 1974, he was still crocheting. At the time, he was working on a bedspread made of 420 squares; I imagine that it was a thread crochet bedspread although the article isn’t clear about that. He also enjoyed broomstick lace crochet and did other crafts including macrame and beadwork.