I recently received a request for information from a woman named Kathy whose question intrigued me and I wanted to find more information. Kathy explained to me that she had received a pile of things from her husband’s parents’ house. Her sisters-in-law didn’t want the items but she was amazed to discover the treasure of a vintage crochet filet flag. She loved it immediately and had it framed, but she didn’t have any information about the piece.

She shared that it’s an American flag with 48 stars that reads “To Keep Me Flying Fight For Me Work For Me”. And she shared this photo: 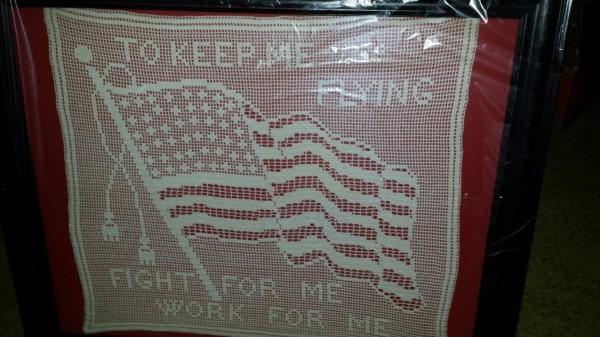 I did some searching online and found two similar pieces, both for sale in online auctions: 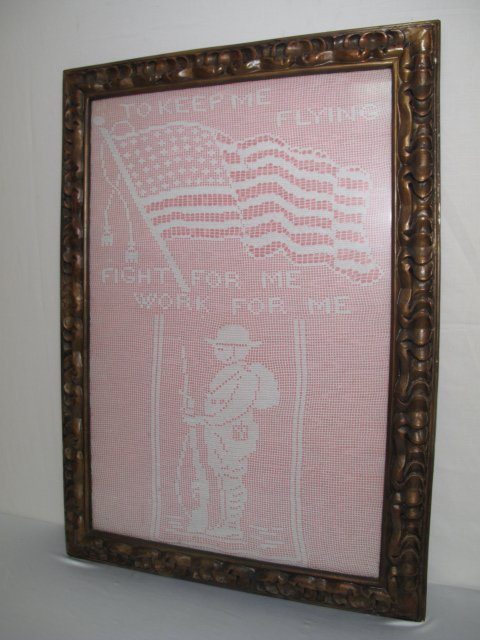 The first one was described as a “First World War Patriotic Dough Boy Crochet Flag”. The auctioneer says it dates between 1914 and 1918 and measures 35″ x 23″ 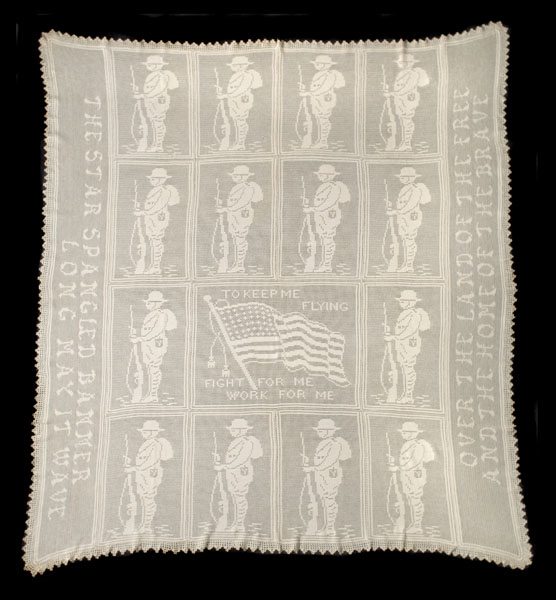 The second one is labeled as a WWI crochet bedspread. It’s a 10″ x 82″ piece that is described online as “a skillfully executed openwork spread constructed from an off-white cotton yarn depicting “doughboy” soldier figures in blocks surrounding a central American flag with the motto”.

I did an online search for that motto and couldn’t find out any more information about it. I learned that the “doughboy” was a term for the American solider (replaced in WWII with the term “GI”). It was used throughout the nineteenth century but popularized in WWI.

Although I couldn’t find any more information on the motto, I did learn that filet crochet with military depictions were common during this time. An article by Dianne Rutherford says: “During the First World War patriotic military themes were popular. Images such as ships, flags, soldiers and medals, along with slogans such as: ‘Success to the Allies’, ‘God bless our brave boys’, ‘God bless our khaki boys’ and ‘Our hero we’re proud of him’ were available.”

And after some more searching, I found a guest post by Karen Ballard over on Gwen Blakley Kinsler’s blog that suggests that at least one of these filet crochet patterns came from Australian crochet designer Mary Card. In fact, it looks to be the one that Kathy found! 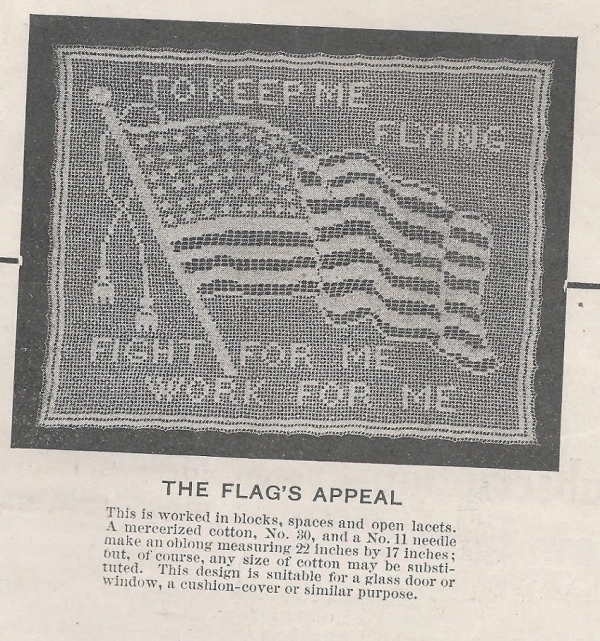 It’s a pretty safe bet, I think, to say that the piece Kathy found was likely made by a woman during WWI who had a loved one in the war, and it was probably made using the crochet pattern from Mary Card. But if anyone has any additional information on this piece or the pieces like it, I’d love to know even more about it!

If this is a topic that interests you, you might also be interested in the book War Imagery in Women’s Textiles 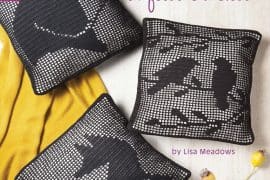