What was going on in the world of crochet in 1942? Let’s discover …

1942 was in the thick of World War II so wartime crochet continued during this time, as we looked at in the 1941 crochet history post. Many women dedicated their crochet time to making items for The Red Cross to donate. Crochet as a craft was impacted by the war in ways both big and small. For example, in the late 1930’s crochet contests became popular, including a big annual contest by The National Needlecraft Bureau. However, that contest had to be paused after the 1942 events (its 6th year) because mercerized cotton thread was hard to come by during the war years. Notably, the year that the contest resumed (1948) it was won by a male crocheter who worked on the railroad.

Crochet was used by women during this time to craft for the war efforts and also to make a little bit of money for their families. But it was a frugal time and it seems everyone was looking at ways to save money in their crafting.

I mentioned in the article on 1935 crochet history that there was an interesting book published then about crocheting with cellophane. This is mentioned again in a 1942 book by A. Frederick Collins called Money-Making Hobbies. It says, “crocheting things with cellophane is one of the easiest, most useful and fascinating hobbies that has been evolved in a long while”. And the 2011 book Archaeologies of Internment explains that cellophane was often available in this era through recycled Red Cross packages:

Cellophane wasn’t the only thing that you could crochet with. I also saw several mentions of crocheting with crepe paper. One example is in Volume 42 of School Arts published by Davis Press which explains: “All sorts of articles can be crocheted of crepe paper. The crepe paper should be cut in inch-wide strips by slipping a roll a little way out of its wrapper and cutting through the whole roll at the same time.”

And here’s an upcycling tip for crocheters from the September 1942 issue of Popular Mechanics:

Several magazines and newspapers published in this year talk about the fashion trends, how women were leaning towards a slimmer silhouette, especially in coats, for example. Crochet is mentioned as something that was used to add slightly frivolous detail to otherwise functional, affordable fashion pieces – crochet yokes and details of crochet on cuffs appear to have been common at this time.

What I thought was most interesting, though, was that the aforementioned crochet with cellophane was apparently incorporated into fashion, too, in particular in Ferragamo shoes:

Source: The impact of World War II on women’s fashion in the United States and Britain by Meghann Mason

Through Google Books online I found a reference to “the first all-crochet fashion show” in the Indiana Telephone News, Volume 32. Further research found that it was part of the aforementioned contest sponsored by the National Needlecraft Bureau (which incidentally also had a speed crocheting contest in this year and the year prior). The Indiana Telephone News says that the show included “thirty-five exquisite fashions, featuring crochet as the highlight of each costume.” This reminds me of what we see today in the CGOA Knit and Crochet Fashion Show!

Here are some of the crochet books I found that were published in 1942, many of which are available today affordably as vintage items or reproductions. As in years previous, a majority were published by the yarn and thread companies of the era, especially Spool Cotton. 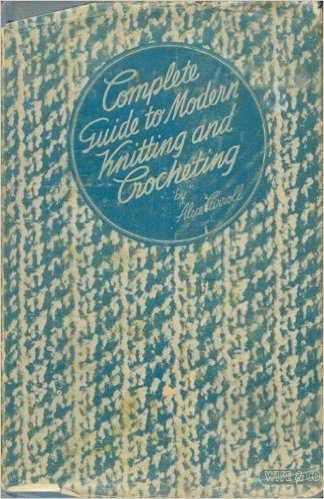 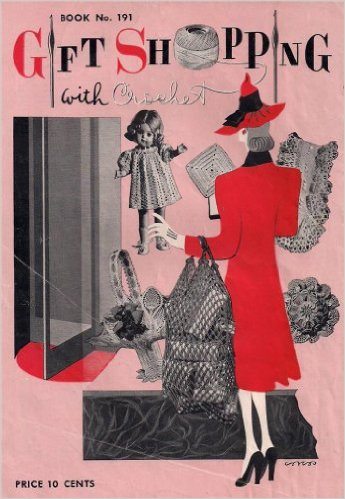 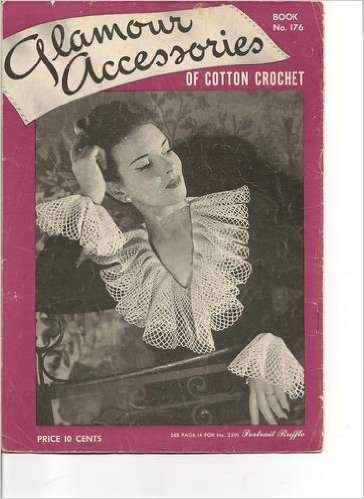 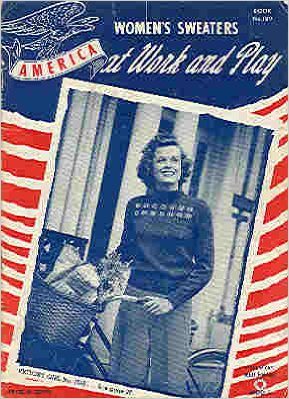 Women’s Sweaters At Work and Play 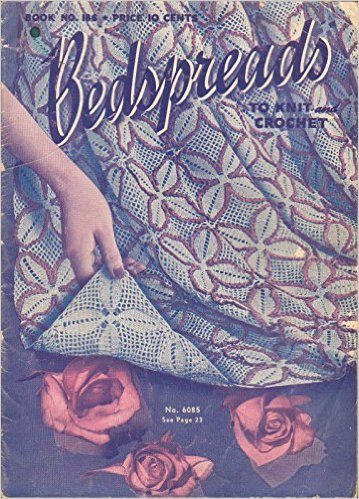 Bedspreads to Knit and Crochet Book No. 186 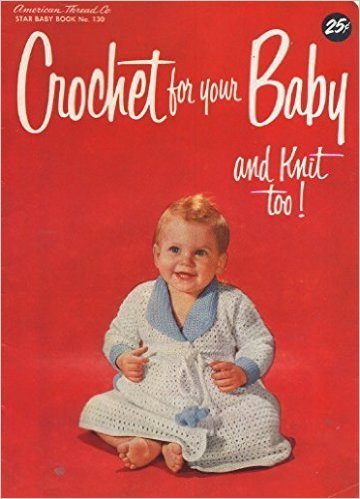 Crochet for Your Baby and Knit Too! Star Baby Book No. 130, American Thread Co. 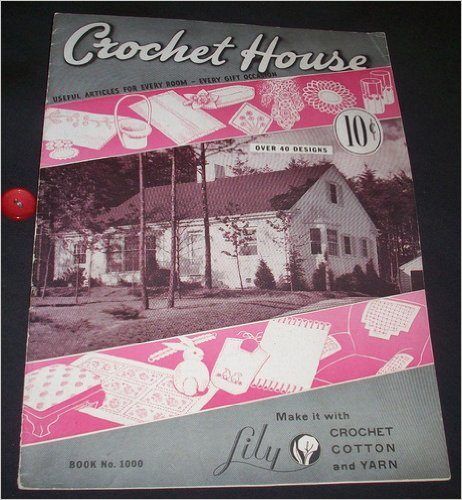 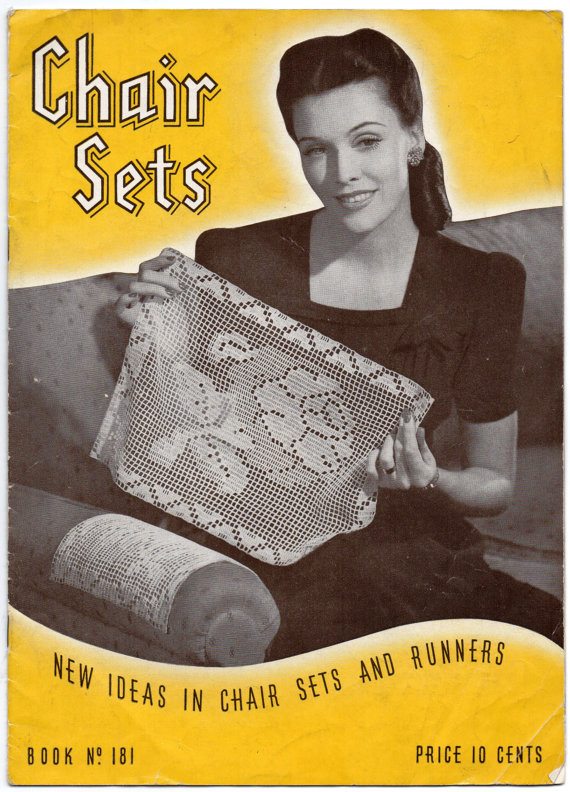 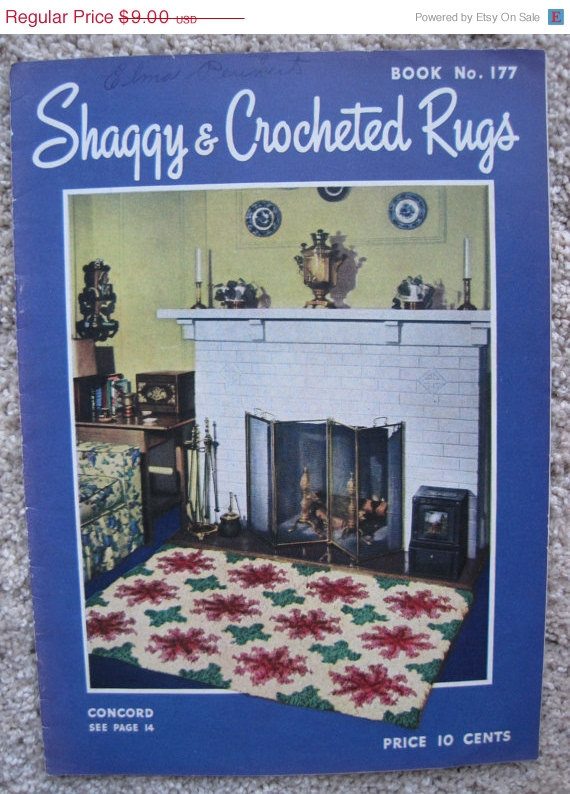 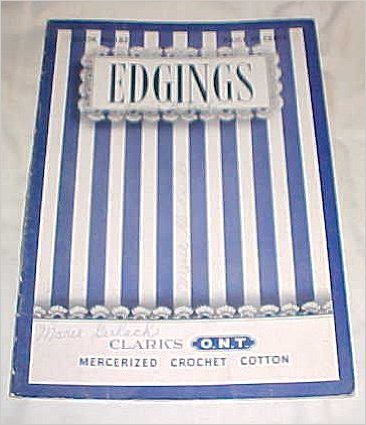 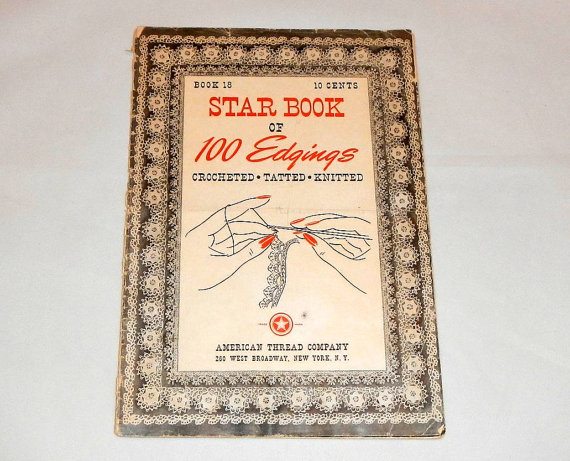 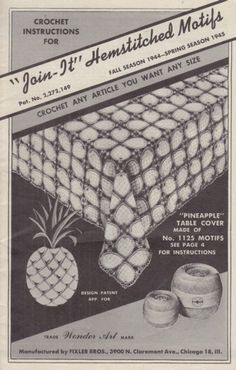 You can find vintage crochet patterns from the above books and other sources for sale and download through Etsy and other channels. Here are a few I liked: 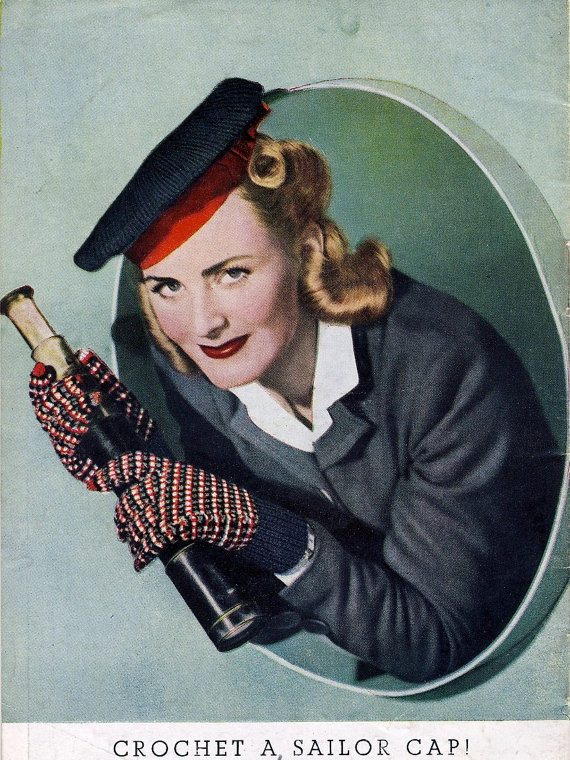 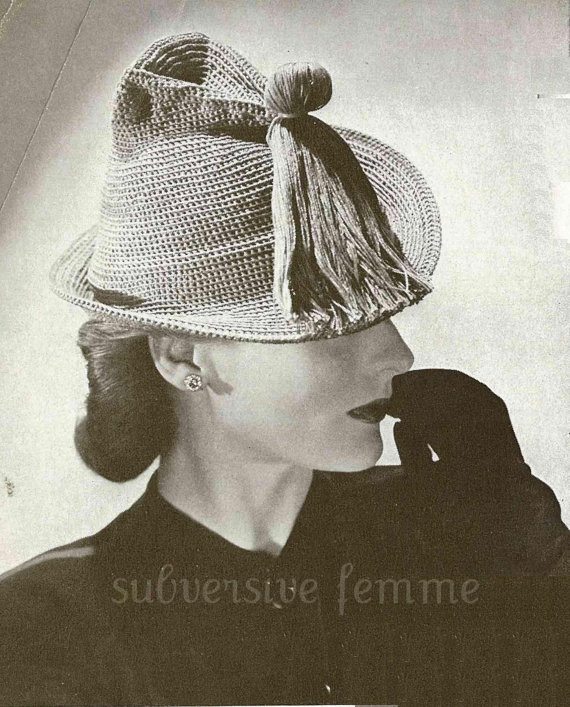 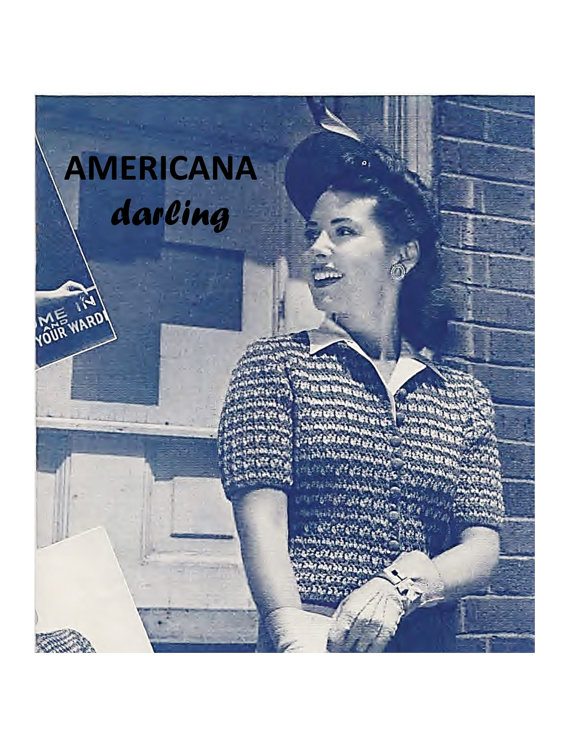 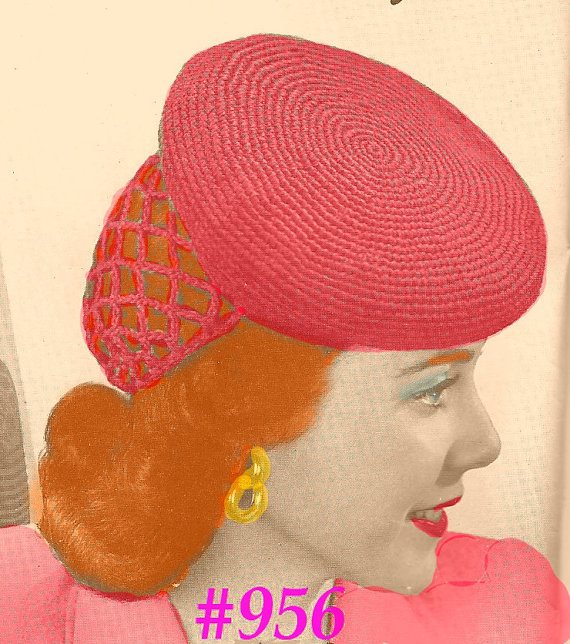 It’s a snood; it’s a beret; it’s both. Vintage 1942 crochet pattern from MissJuliasPatterns 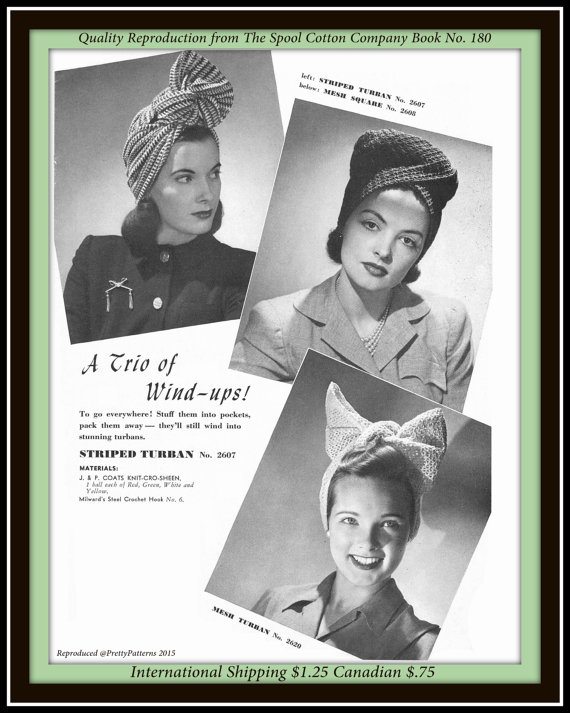 A Trio of Wind-Ups vintage crochet turban patterns via APrettyPattern 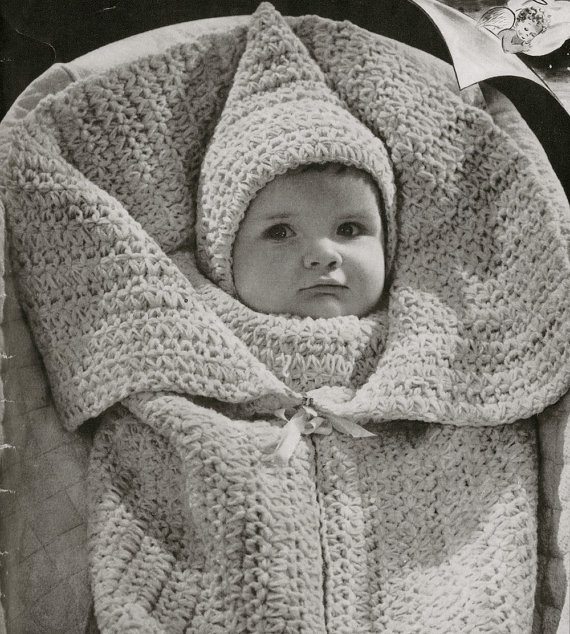 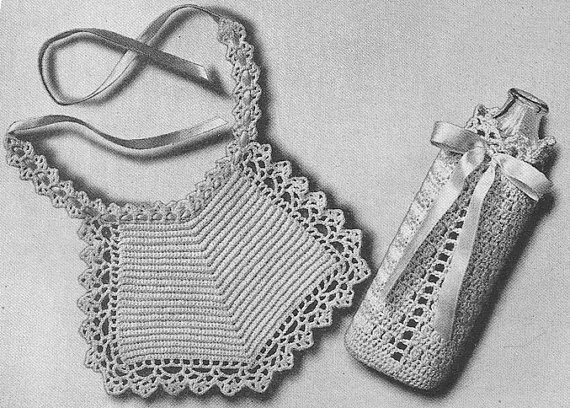 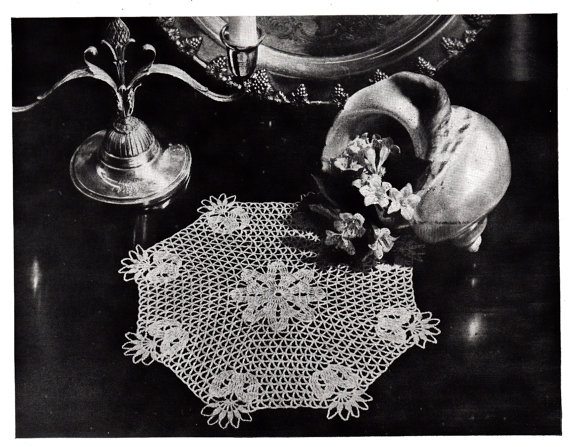 I love searching through the archives of Google Patents for information about crochet history because it shows some of the unique things that people were thinking about it in the craft at any given time. A search like this for 1942 uncovered: 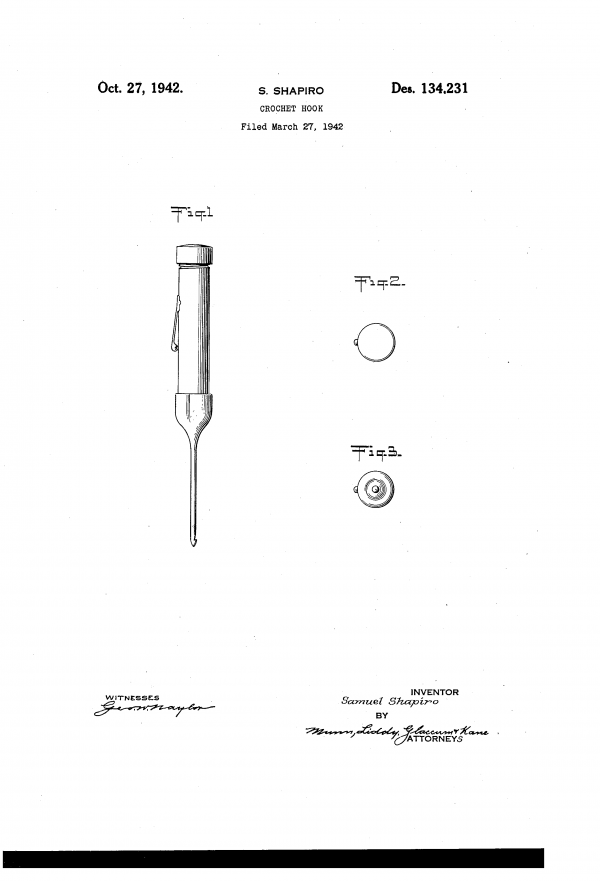 A patent for a new ornamental design for a crochet hook 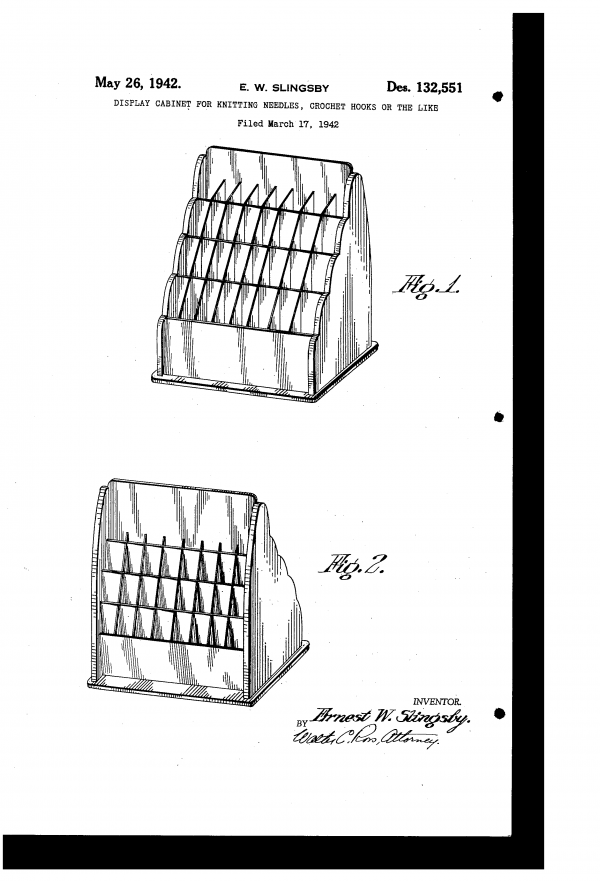 A patent for a display case for crochet hooks 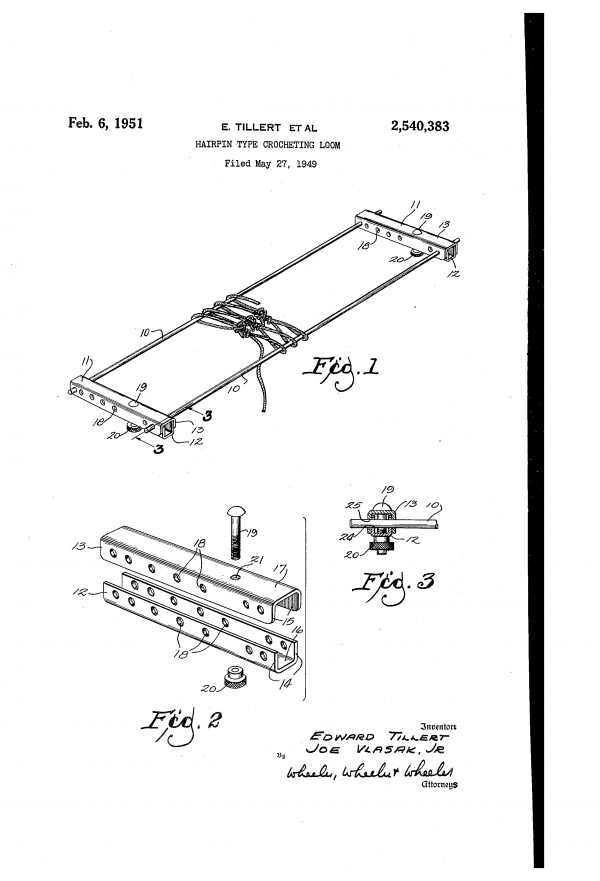 A design for a hairpin lace loom 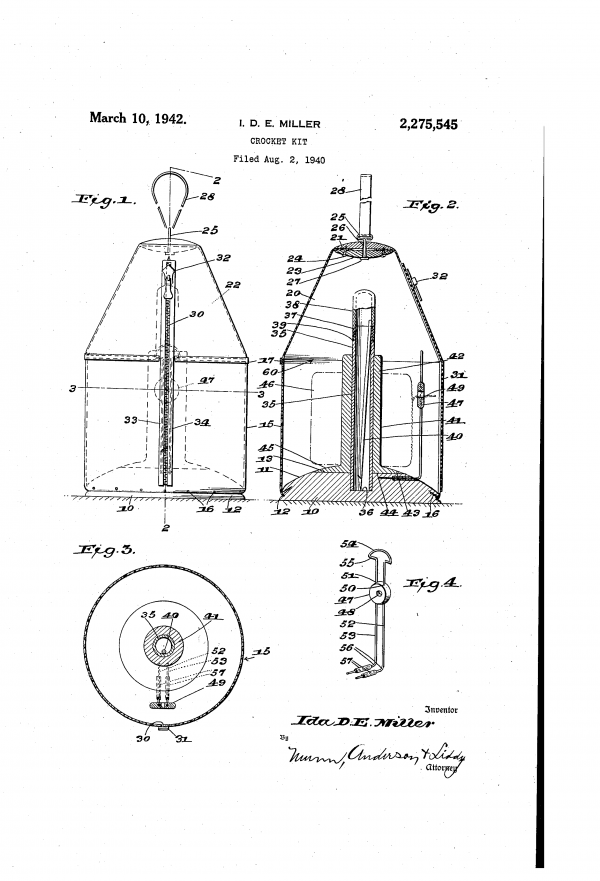 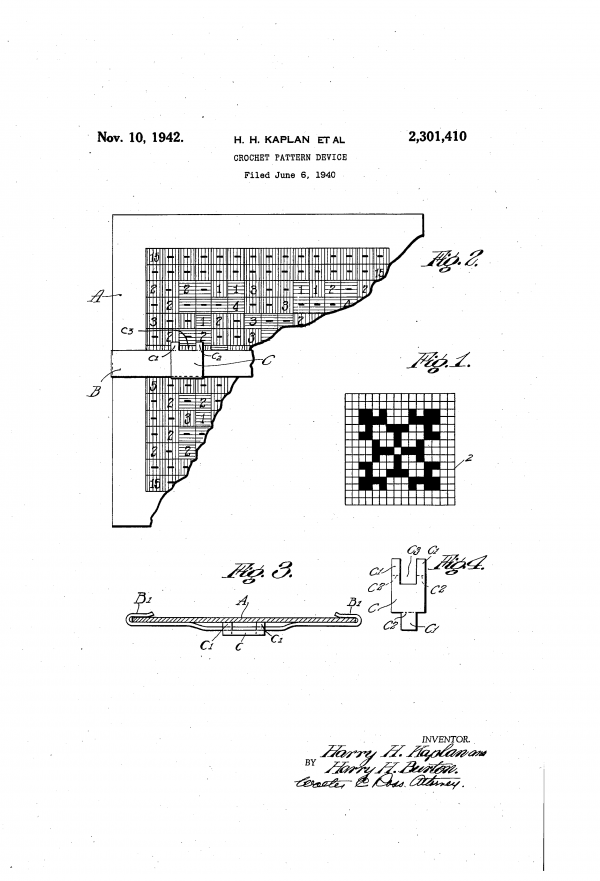 And finally, a technique for making it easier to read crochet patterns. The patent author for this writes: “Heretofore, it has been difiicult for a woman to lay aside her work for a time and to resume the same at a later time at the exact point where she had left off without encountering great difficulties due to the fact that she has had to make certain counts, etc., etc. to determine just ‘where’ she had stopped during the previous operation in order that she might continue therefrom.” It goes on to explain that crochet patterns are really complicated and then says, “Without any question, such a complicated system of rules which must be followed very carefully in order to produce the desired results must be simplified in order to make the hobby interesting and entertaining to the greatest number. In cognizance of such difficulties, We have devised a means whereby these objections are overcome.” Fascinating. Although I read through the patent thoroughly, I couldn’t quite figure out how it was designed to work.

Perhaps my favorite find in my research into 1942 crochet was a mention of interesting crochet ideas from 70 years prior in 1872. The May 1942 issue of Popular Science was dedicated to sharing a variety of history from 1872. One page shared a reference to Harper’s Bazaar (which launched in 1867):