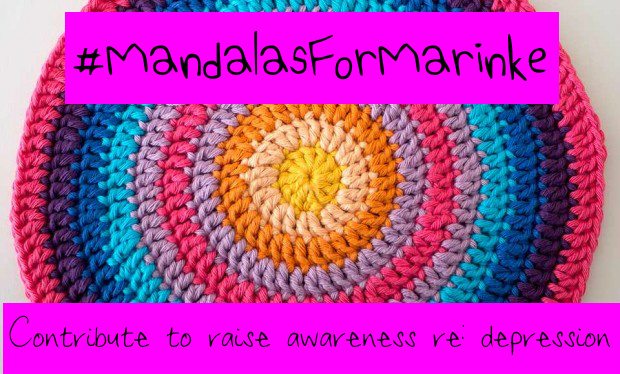 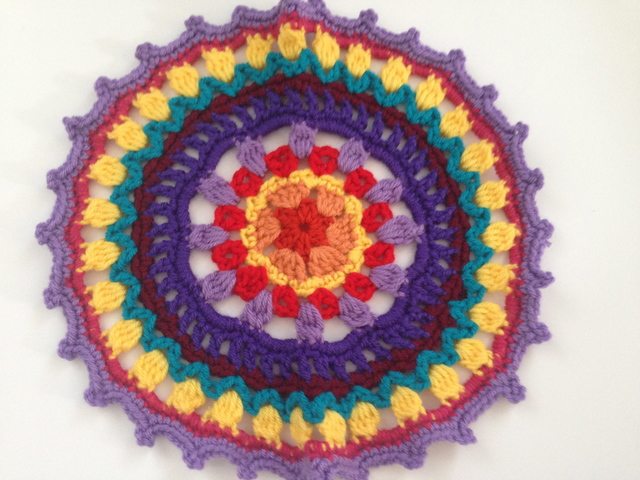 This is a dynamic, colorful version of the I Love Holland crochet mandala pattern by Marinke. I love the vivid brightness of the many colors, and the repeat of the bright yellows and comforting soft purples. 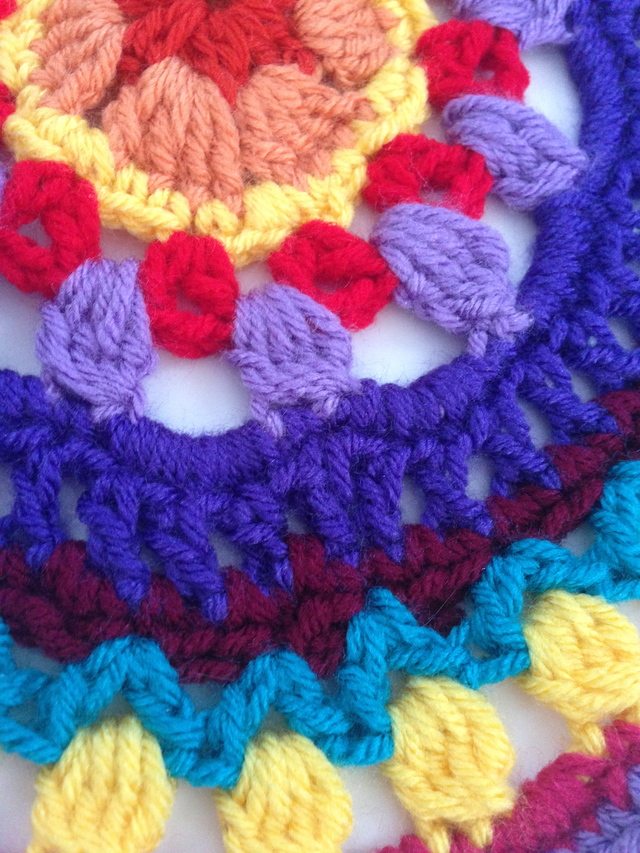 This contribution comes from an anonymous participant. I’ve said this already but want to emphasize that it’s totally okay to participate in Mandalas for Marinke in any degree of anonymity that feels most comfortable to you. You can be completely anonymous, partially anonymous, or not anonymous at all. We are all in different stages of our journeys and have different reasons for what we do and don’t want to share and it’s important to honor that for ourselves and for others.

“Several years ago I picked up crochet again after my son was incarcerated. It was the only thing at that time in my life that allowed me to feel in control. Mandalas, in particular, were soothing and helped me to keep from unraveling. Life is better now and I’m emerging from the fog of depression and sadness.

I’m so very sorry Marinke didn’t have the chance to emerge as I am doing. I crocheted her “I Love Holland” mandala in honor of our struggles. RIP Marinke.”

I want to add that crochet has been known to be helpful not only for people with incarcerated loved ones but also for people in prison. There are many crochet programs in prisons that provide a positive pastime that builds inmate’s self-esteem and teaches the skill of crafting while offering a way for them to give back to the community. 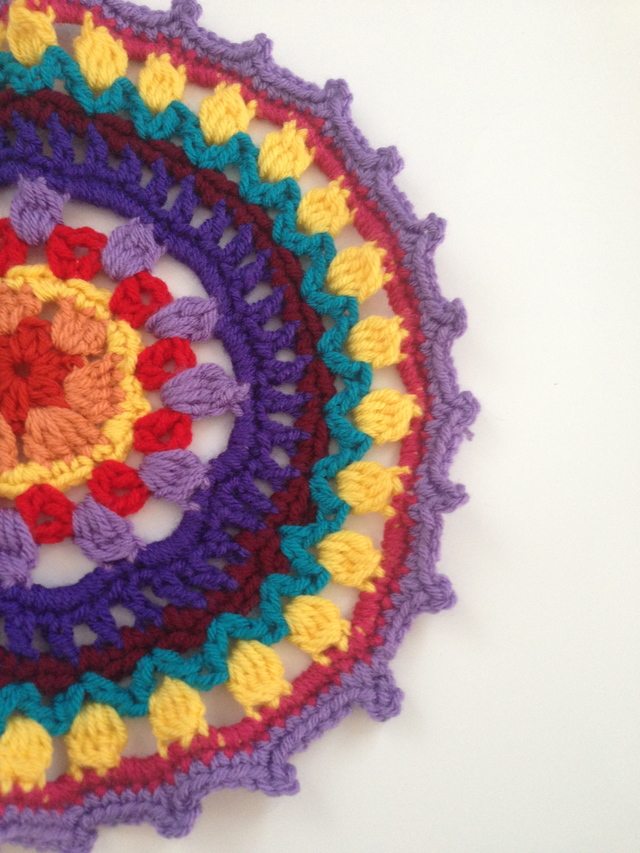 As I mentioned previously, in 2013 Wink joined in with a 52 lists project. On Week 3 she shared a list of things she should be proud of, including “I taught myself how to crochet” and “I can take anything and make it my own”.

She wrote: “This week’s list is very personal. Some of the things I wrote down may seem a bit dark, but to me they’re personal victories. I am definitely proud of all I have achieved and accomplished in the last few years, despite and possibly because of some personal hardships.”

It was a bit bittersweet for me to look back at this list, which includes “I battled depression and won” and “I’m still alive”. It’s heartbreaking to me that this is no longer true. But it also reminds me that she was always using her creativity to fight the negativity and that she did win, again and again, every day, for a long time. 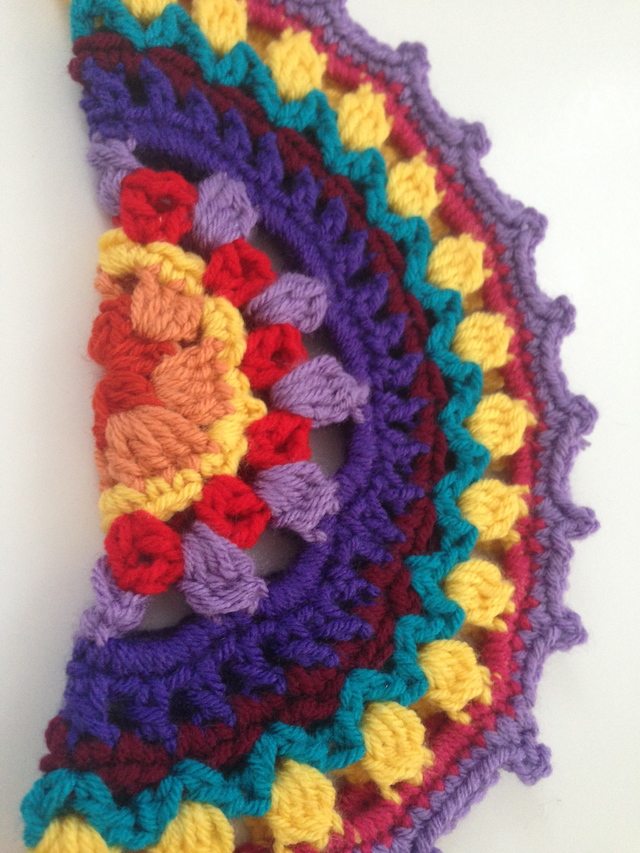 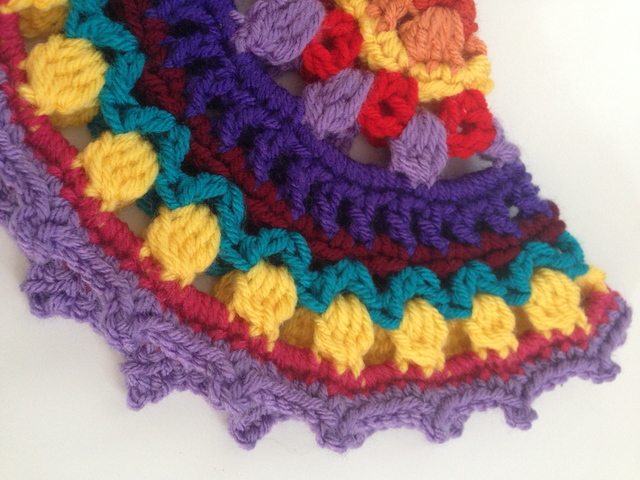 Today I want to share some words of inspiration and encouragement. I’m reading Kate Bornstein’s 2006 book for teens called Hello Cruel World: 101 Alternatives to Suicide for Teens, Freaks and Other Outlaws

. I’m impressed by the book, which talks directly to teens without belittling them, addressing issues of gender identity and other difficult topics, and providing not just suggestions but also support for continuing to choose life even though doing so can feel difficult.

In the first chapter of the book, Bornstein writes:

“I can tell you this with certainty: You are worthy and capable of finding a way to live your life just the way you really are. And there are plenty of good people in the world who believe that a life like yours needs to be lived. If you work at being as fully you as you can possibly be, you will feel better.

And keep in mind that the you that makes life worth living today probably won’t be the same you that makes life worth living this time next year. Identities aren’t meant to be permanent. They’re like cars: they take us from one place to another. We work, travel, and seek adventures in them until they break down beyond repair. At that point, living well means finding a new model that better suits us for a new moment.

I believe in the truth of you and so do a lot of other people, people you may not even know yet. Whatever you’re being right now, wherever you’ve been traveling, and whatever you might become tomorrow, I believe in you.”