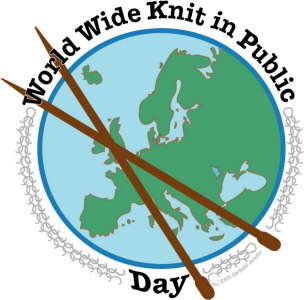 This post is part of the 52 Week Crochet Blogging Challenge hosted by Julie of Red Berry Crochet. The prompt for today was “crochet in public and tell us about your experience.” I thought before I shared my experience I’d mention that World Wide Knit (and Crochet) in Public Week is coming up. This year’s dates are June 14 – 22.

For my post, I wanted to share an excerpt about this topic from my book, Crochet Saved My Life:

San Francisco has a wonderful craft group called Crafting in Public that was started by Alice of the blog Future Girl Crafts (http://www.futuregirl.com). This group of people meets twice a month at a café for a few hours to craft and converse. I learned about it long before I actually went and checked it out. I had been meaning to go for months but had kept putting it off. I had legitimate reasons for putting it off but if I were to honestly look at the real reasons behind those reasons I’d admit that I was still a little bit anxious about starting something new. The anxiety isn’t founded in any real, specific fear. I’m not afraid that the people I meet won’t like me. I used to be afraid that I wouldn’t like the group or event but I’ve come to accept that I’ll like some things and not like other things and I’m okay with that. So the anxiety isn’t really about anything; it’s just kind of there. And because I did have the experience of more intense debilitating anxiety, I understand a little bit about how that tiny flicker of it that made me put off going to my crafting group can grow bigger and more immobilizing for many people.

Perhaps that’s why my ears perked up to notice that more than half of the group members at this meeting mentioned that they liked the meeting specifically because it gave them a focused activity to enjoy with other people who also liked it, providing an immediate topic of conversation in a safe setting that helped to relieve their social anxiety. The group is a mixture of crochet and knitting lovers who also do some other crafts so the benefits of the group aren’t limited to crochet but for the purposes of this book we’ll focus on the crochet part. More than one of the gals in the group on that first night that I went said that she really didn’t consider herself a social person but felt like there was a need in her life to know more people. Going to a group scared them (to different levels, running the gamut from my putting-it-off anxiety to true escalated-panic feelings of terror) but they were able to get themselves to overcome that fear because they were meeting up with a group of other people who crochet. Crochet was safe, it was purposeful and that focus made it possible to go to a group get together with a goal in mind even though going to the group meeting was difficult.

Do you craft in public? With a group or on your own? Share your experiences! And think about trying it (for the first time or again) during Knit and Crochet in Public Week in mid-June.