Let’s look at crochet news from January 28 – February 3 … not only from this year but in review of the past two years as well. It’s recent crochet history updated and the best of this week’s crochet news all wrapped up in one. 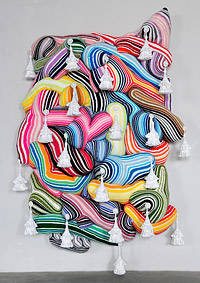 The artist that I profiled during this week in 2011 was Joana Vasconcelos. She’s such an amazing talent. In 2012 she became the first female artist to show at the Chateau de Versailles, where she exhibited several large-scale works including some in crochet. Vasconcelos is currently exhibiting her work in a multi-artist exhibition at the National Trust for Scotland’s Robert Burns Birthplace Museum. Each artist is displaying a version of sheep; hers (above) is abstract and beautifully colored, made of crochet, polyestery, ornaments and more. (That’s actually a project I would have expexcted Leslie Blackmon to be one of the artists for!) 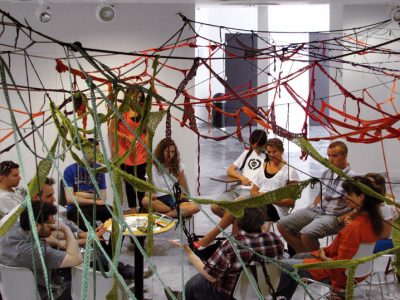 Another bit of crochet art that I wrote about during this week in 2011 was an installation being done by elderly artist Sheila Pepe. I later did a profile of this interactive artist. When I checked in on her work one year ago she was about to start a New York exhibit. This year the 90-year-old woman is an artist-in-residence, first in Italy and then in Maine. The image above is from a workshop she did last year.

And finally at this time last year was when I mentioned the Gaultier Spring 2011 runway show that include shoes with crochet trim; they remain my favorite crochet shoes I’ve seen to date. Since that post I’ve done a post about other Gaultier crochet and shown some photos of Gaultier’s fashions when they were on display at a museum here. Reportedly some of the sailor stripes in the 2013 men’s Gaultier collection above are done in crochet.

The artist I profiled was Ivano Vitali, the Italian artist who knits and crochets newspaper using large handcrafted needles and hooks to create amazing upcycled fashions. The skirt above is a 2012 creation that he says is made from “the bags used for food”.

I enjoyed writing last year about Terry Taylor, a woman who had lost her eyesight in a freak accident but was continuing to crochet and her work was going to a good cause. I don’t have an update on her but hope she’s still hooking!

Same with Bob Roskamp, the elderly man who reportedly crochets every single time he sits down.

My favorite news in crochet this past week was:

1. Crochet helps lonely seniors. “Seniors living in skilled-nursing facilities and families in need are among those who benefit from handmade blankets and other crafts lovingly created by women in the knit and crochet group at the Moorpark Active Adult Center.” The article says that 6 out of 10 elderly people in these places have no one visiting them so this kind of kind activity is important!