In this week’s edition of 50 Years of Crochet History we’ll take a look at the world of crochet in 1935.

My favorite thing to find from this year was a news article from The Meriden Daily Journal titled: “Fan Mail Pours in on Crocheting Bartender, Interrupting Tatting”. It isn’t quite clear from the text whether this guy crochets, does tatting, sews or what. What is clear is that Harry Haberman, described as “the tatting bartender who lifts a barrelt of beer without batting an eye” does some type of needlework. He was so popular that he received fan mail from many people around the country, including a young Arizona widow who wanted him to come live with her and her mom on a ranch where they could “crochet and knit in contentment” together. This male crocheter was being approached for this autograph at events.

As of the writing of the article, he had spent two yeras working on a bedspread (I’d like to think in thread crochet but I don’t actually know) that was only one fourth finished. He estimated that the value would be $1500 when it was complete, an amount which is no chump change now and was a huge expense in 1935! 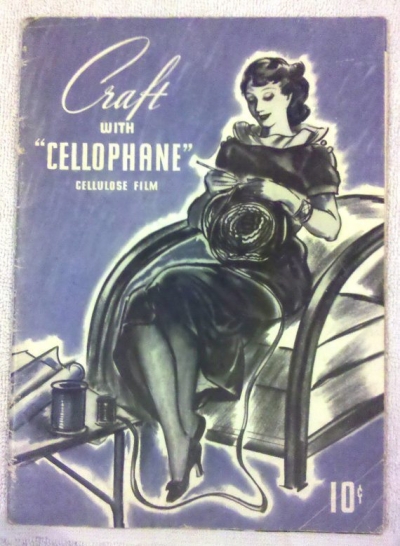 My other favorite find from this era was on Etsy where HiloBooks is selling a copy of a book called Craft With Cellophane. Part of the description says: “Craft with cellophane challenges your imagination! The 101 items here offered are only a beginning. Once you make a few and actually see the thrilling results, your fancy will carry you on and on to fascinating new creations of your own.” Crafty options for this alternative material include weaving and molding it, in addition to crocheting it of course.

My favorite find in terms of crochet style from 1935 was the crocheted neckwear by designer Laura Wheeler that included a range of different shapes:

The crochet neckpiece that you see on the bottom left there is called a jabot. This word originally referred to the ornate ruffles on shirts in the 17th century but then became popular as a neckpiece around this time in the 1930s. If you do a quick search online for a crochet jabot, you will see that there are patterns available for vintage versions like this one as well as more modern takes on this neckwear. For example, designer Shelby Allaho made a popular, colorful crochet jabot pattern for a 2011 issue of Interweave magazine. And Etsy’s Zafirah sells the vintage patterns for this crochet jabot, which I don’t have a date for but can guess that it would be from around this same time in the mid 1930s:

The crochet yoke also seems to be a popular item around this time. For example, The Palm Beach Post advertised for sale a crochet pattern by Marian Martin for this crochet yoke:

Finally, it seemed to be really popular at this time for crochet patterns to be in sets, so the pattern would be for a hat and matching purse, as an example.

In terms of technique, filet crochet seemed to be fairly popular among patterns that I researched from 1935. An interesting take on it that also comes from designer Laura Wheeler (a little more on Laura in the designers section below) is this filet crochet blouse designed to look like a plaid pattern:

Something I saw mentioned a couple of times, such as in a Rochester Evening Journal pattern that you could mail away for, was the “slipper stitch”. I learned from The Crafty Tipster that this is a vintage English version of referring to the American stitch of single crochet in the back loop only to create a ribbed piece.

Anne Orr was a popular crochet designer whose patterns were in books at this time. A Google Books post about her says: “The author of nearly 100 needlework booklets between 1910 and 1945, Anne Orr produced lively and graceful designs that are still appreciated and admired today.” This one is the Star Book of Crochet Designs

Like the book shown above, the Paris Sponsors Crochet

book was a pattern booklet created by a thread company (in this case, Spool Cotton). It is described online as: “Originally published in 1935, this book contains a selection of Paris-inspired designs for hats, gloves, belts and collars in crochet”.

Etsy’s bigbangzero currently has a copy of this crochet edgings book from 1935 that was also published by Spool Cotton.

I was not surprised to find out about this 1935 crochet book called Clarks’s O.N.T. Crocheted Neckwear

since crochet neckwear was clearly popular at this time. 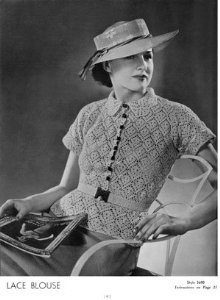 Finally, there’s a book that’s really tough to get a copy of called simply Crochet Book

, authored by Elizabeth King and published by Leisure League of American. You can see snippets of the book using Google Books and it looks interesting. For example, you can see her introduction to the craft, where she writes: “It was natural that when primitive woman first tried to fashion things with fibre, she began with a single strand, and in doing so laid the foundation for our knitting, crochet and embroidery. Actually crochet is producing a fabric with a continuous loop.”

Some examples of other vintage crochet patterns that are available from this era include:

The cloche hat is actually the thing I personally think of most often when looking at vintage crochet patterns from the 1930s. This PDF pattern is sold on Etsy by eStitches.

Vintage crochet blouse pattern, PDF sold on Etsy via VintagePatternPlace; I love the open back on this one!

To go with that backless blouse you may want the 1935 pattern for this crochet bra that has a backless option. PDF sold on Etsy by PamoolahVintage.

Laura Wheeler was one of the crochet designers who had a lot of patterns available for sale through the mail (and advertised in newspapers). For example, you could send ten cents in either stamps or coins (coins preferred) to get the crocheted beret and purse patterns show above. I actually haven’t been able to find any information about who Laura Wheeler was; this almost makes me wonder if this was a fictional name for multiple designers like we saw last week was the case with Alice Brooks. Then again, Laura Wheeler is sometimes quoted directly (for what it’s worth) in the articles about her patterns, so maybe she was an individual crochet designer.

What leads me to even more questions is that the same thing is true for a designer named Marian Martin. Furthermore, there are actually a few articles out there that reference the two designers together. This starts happening in the 1930s but actually happens again with the same designers’ names in the 1970s. For example, there’s this article snippet from the Observer-Reporter that comes from 1974:

Does anyone have more information on these designers?

Next up in this vintage crochet series is, of course, 1936 crochet! Look for it on the blog next week.