In this week’s edition of 50 Years of Crochet History we’ll take a look at the world of crochet in 1933.

I want to give a shout out to Australian crocheter Jodiebodie who left a great comment on my 1930 edition of this series, saying:

“A major source of patterns and advice for households in Australia for much of the 20th Century is “The Australian Women’s Weekly” which was first published in 1933. (I realise you are not up to 1933 yet but thought you may find it useful information). You should be able to find that archived in the National Library of Australia too. Always worth a look because the other articles in the magazine provides a cultural/social/historical context for the patterns.”

I mention this now, obviously, because this is the week that we’re looking at 1933 crochet!

There was definitely a blend of styles in crochet at this time, with some emphasis on fully crocheted garments but also some continued interest in using crochet as embellishment on accessories and home decor items. Several newspapers, like the Toledo News-Bee, published a pattern for adding crochet edging to plain white cotton gloves using mercerized cotton crochet thread, suggesting this as a great gift for girls graduating school.

In fact, many of the items coming out in crochet at this time were geared towards high-school or college-age girls, seeming to suggest that a lot of gals this age were taking up the craft. The Ellensburgh Capital gives a good description of some of the style of the time, in an article that says crochet cotton blouses are all the rage. It starts:

“Wouldn’t you just love to own one or several of those smart, cool, attractive and very practical mercerized-cotton hand-crochet blouses which high-class specialty shops are showing this season, to wear with the now-so-vogueisn linen (particularly black linen) or pique suits?”

The Meriden Daily Journal offers a free crochet beret pattern, saying, “deft fingers, a crochet hook and a ball of crochet cotton are all you need to make yourself this dashing little fall hat which goes far towards complementing the slim lines of your new suit”.

Etsy’s  PamoolahVintage  sells this pattern explaining: “The prettiest dress in crochet using various shades of yarns to form an ombre effect – shading from primrose to dark orange although you can choose your own colours!” 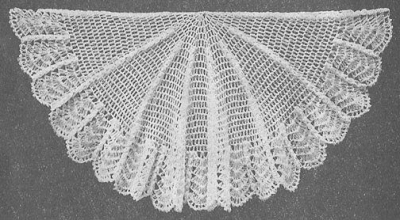 Etsy’s annalaia sells the vintage pattern for this 1933 crochet shawl that is really the classic kind of item I actually expected to see a lot of from this era, even though it doesn’t seem to be as prevalent as I presumed.

The crochet pattern I was most excited to find was for a string crochet shopping bag … I loved finding out that this market bag or tote bag that is so common today was being made then as well!

The 1933 Lux Book: All the Latest Knitting & Crochet Styles (via National Library of Australia). From what I can tell Lux was a brand of knitting and crochet pattern books that started coming out around this time and continued through the 1950s. They seem to have come out annually, although I may be incorrect about that.

. This is a 2009 reprint of a 1933 book that is described as “a classic edition of knitted and crocheted garments from the Depression Era” for both women and children.

Although a lot of the crochet from this time was geared towards womenwear, there was still some patterns coming out for children, as evidenced by the reproduction of this book called Minerva #31 – Knit & Crochet Garments for Babies & Juveniles

. I had no idea that there would be a book about crochet rag rugs from this era. But then I did some more research and found out that there were a lot of patterns for rag rugs, crocheted and otherwise, from this era, which I suppose makes sense since the Depression Era did require upcycling material in this way. It’s really expensive to get your hands on an original copy of this book but I’ve seen some folks on Etsy, like eVINTAGEpatterns, selling digital versions, which is allowed because the book is in the public domain (according to the seller).

There was a book that came out in 1933, which is now out of print, called New crochet designs and their many uses

. The author of that book was Anne Champe Orr, and I was a little curious about who she was so I did some research into her. I learned that she started producing various needlework designs in 1915 after starting out with a career in art. She didn’t limit herself to crochet designs; she created designs in knitting, embroidery, cross-stitch, lacemaking (including tatting), quilting and rugmaking. She actually originally started by self-publishing these patterns and then eventually she got hired by a number of different companies and publications. Want to know a strange fun fact about her? She actually wasn’t a needleworker herself! Orr passed away in 1946 but there was a huge revival of her work in the 70s and 80s when several reprint publications came out aggregating and sharing her designs. Heirloom Crochet has links to some of her work.

People were trying diligently to create a machine that could crochet to replace the “tediousness” of handwork and make the craft more efficient. To date, there is no crochet machine. In 1933 a patent was filed for a machine that was intended to be able to crochet “a sheathing about a core”. I have no idea what happened with that plan other than that the patent was filed in 1934 and issued the following year.

The only other crochet-related patents from 1933 that I found were one for a yarn or thread holder that would be able to hold crochet thread and one for a shoulder strap that could be attached to different garments to hold the shoulders in place, a portion of which it was suggested might be made using crochet.

Several 1933 newspapers, such as the Boston Globe, had a “household advice” section that would frequently offer crochet suggestions, such as using a crochet chain to sew the ends of a curtain together.

The Schenectady Gazette continued to announce crochet club meetings in 1933, so they must have been going well! (They were mentioned in 1932 issues as well).

Popular Science had an article about building ship models that mentioned that crochet hooks are good tools to use for certain things, saying for example that “a small crochet hook with the hook ground off makes a handy awl”.

But the big crochet-related news of 1933 seems to be that there was a huge needleworker strike! The New York Times has an article (that you have to pay to see in full) explaining that The Bonnaz Embroidery Workers Union, an affiliate of the International Ladies’ Garment Workers, had a 100% response rate to its call for a strike and so 15000 workers went on strike. I didn’t purchase the article so I don’t have the full details, but I do see a snippet through Google that mentions that the workers on strike were “embroidery workers and crochet  headers”. This effectively put a halt on the dress industry at the time and was therefore a big deal. All I’ve been able to find out about the reason for the strike is that the union wanted a “ban on home work”.