We’re continuing on with the history series that debuted last week. Today we’re looking at crochet in the year 1931.

There are very few people who do crochet portraits. The only two I really know of right now are Jo Hamilton and Pat Ahern. I had always assumed that this was a new thing. But it turns out that someone apparently crocheted a portrait of President Herbert Hoover. I discovered this from several 1931 news reports about a painter named Douglas Chandor who had done a portrait of the artist. These articles quote the president as saying that he had previously had his portrait done in feathers, shells and crochet and “added with a smile that most people seemed to prefer his crocheted portraits”. I would love to see one of those. I wonder if they survived?

The style of crochet at this time in history continued to be mostly cotton crochet, often edgings. For example, check out this from a 1931 newspaper about Paris style influencing “99 out of 100 girls” to crochet edging on cuffs:

Another newspaper talks about the fashionable crocheted lace jabot:

And In Other 1931 Crochet News

I think my favorite thing that I found in the 1931 Google News archives about crochet was an article about an upcoming Amateur Night at The Fox Palace. It said that the headliner would be Al Drost, who had just “written and staged a musical dancing and singing revue”. It is the description of him that mentions crochet; saying that “Al has proved his couraged in the roped arena, on the gridiron and with a crochet hook”. I so wish I was able to find out more about that story!

The Painesville Telegraph published a short mystery thriller story and it mentions crochet:

Notice that it talks about dropped stitches; that’s from knitting, not crochet!

The crochet-related books that were published in 1931 included:

Amy E. Smith and Dora E. Smith created this 1931 baby knit and crochet book available in full online. I love that there’s a good mix of both knit and crochet designs as well as a great variety in the crochet including coats, dresses, hats, shoes, bibs and a crochet pram cover. This pair authored several other knit/crochet books around this time as well including one on “toddler woolies” and another on crochet edgings.

A similar book comes from Ella Allan and is called What to Make for Baby: 55 designs in Knitting and Crochet. It looks like this one may have been written prior to 1931 then updated and published in this year.

Some of the magazines that mention crochet at this time are Homes and Gardens, Woman’s World and Needlecraft: The Magazine of Home Arts. Not everyone thought it was great for women to spend their time crocheting, though. A 1931 women’s studies book called Our Mothers by Alan Bott and Irene Clephane hints at this in the phrasing of this sentence: “A woman’s hands, not her head, should be occupied ; and occupied they were, with interminable lengths of crochet and tatting, and masses of embroidery and woolwork.”

This is an example of a 1931 crochet baby coat from the aforementioned pattern book by Amy E. Smith and Dora E. Smith.

Etsy’s schmetterlingtag sells a reproduction of this book of 1931 knit and crochet shawl designs. I love the excerpt provided on Etsy that begins: “Nowadays, every woman who gives thoughtful preparation to her wardrobe includes a variety of knitted or crocheted garments, because of their artistic beauty and their comforting warmth. Whenever women meet, the art of knitting and crocheting is discussed-the newest garments, the best stitches, the prettiest colors.” 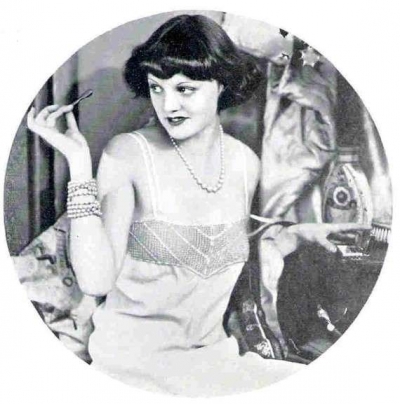 The same seller (PamoolahVintage) also sells the pattern for this knit and crochet dress and explains: “This is unusual because the main part of the dress is knitted – the insertion is in beaded crochet (no beads just the style) in a contrast colour.”

Note: There are a lot of great vintage crochet patterns, including beautiful dresses, that came from sometime in the decade of the 1930s but don’t have an exact date. After I’ve done the history posts for the decade I’ll do a separate roundup post for those!

Last week I mentioned that someone had applied in 1930 for a patent for a crochet stuffed toy; that patent was granted in 1931.

Another patent approved in 1931 was for an item that “relates to the making of articles of any desired shape from wire”. It mentions that it can be used to make belts and also mentions that crochet will be incorporated. Some of the figures accompanying the patent documents even look a little like crochet:

There were only a few new patents filed in 1931 that mentioned crochet and they were all machines that incorporated a “crochet needle” but didn’t really have anything to do with crochet.

I’ll be back next week with crochet history from 1932!