A little while ago I did a profile of 1970s crochet artist Bonnie Meltzer in which she mentioned that she mentioned she’d had work featured in a 1972 book by Dona Z. Meilach called Creating Art from Fibers and Fabrics. Despite all of the research I’d done into 1970s crochet this far, I’d never heard of Dona Meilach. I have no idea how that’s possible because as soon as I looked her up I discovered that she was a prolific author in all areas of craft writing, not only in the 1970s but all the way through to the early 21st century. Today let’s take a look at crochet in those vintage books. 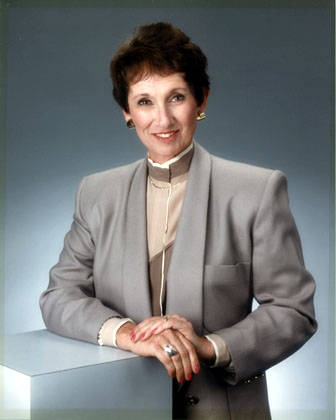 Dona A. Meilach was an author whose books were primarily in the areas of craft and food writing. She was born in 1926 and lived to the age of 80. Her most recent book that I could locate via Amazon is a book on ironwork

published in 2007 shortly after her death. The oldest one that I could locate was her 1970 title Making Contemporary Rugs and Wall Hangings

. In between those two she seems to have put out dozens of books, including a number that feature crochet work. I haven’t been able to find out a lot of information about her personally. She has a website that just lets us know that she passed away in 2006. That said, you can tell from her books that she was very interested in craft, art, design and also cooking. She did a great service using her work as an author to aggregate, highlight and share the work of amazing artists and makers of all kinds. I imagine she was an interesting woman!

NOTE: After finishing the writing of this post I located a Meilach book older than the 1970 book mentioned above. It’s a 1964 book called Collage and Found Art that she co-authored with Elvie Ten Hoor.

Creating Art from Fibers and Fabrics (1972) 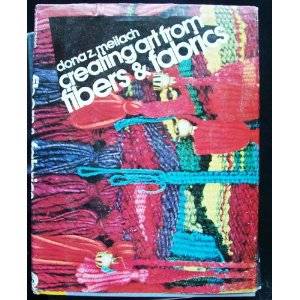 One of Dona Z. Meilach’s first books was Creating Art from Fibers and Fabrics

, which was published in 1972. It is a celebration of the use of fiber in art, something that was just beginning to become popular at this time. In the introduction she says, “Techniques such as quilting, knitting, crochet, knotting, patchwork, and weaving, which traditionally have produced utilitarian items, are no appearing in works of art that must jolt us out of our complacency about the methods”.

This book has chapters for different techniques including one chapter for crochet and knitting. Before I get into the crochet in this book I just have to say that there are a lot of really fascinating works of art in this book in the other forms as well including a form of fiber meshwork I’d never even heard of called “sprang” (apparently also known as meshwork, knotless netting and Egyptian plaitwork) – something I plan to learn more about! Okay, now for the crochet in this 1970s book.

This was the book Bonnie Meltzer was referencing when she mentioned the author and it includes one of my favorite pieces of hers, a piece called “I Always Wanted to be a Blonde Rather than a Raven-Haired Beauty”. It is real people inside of crochet costumes – something most of us today would probably think of as being a signature of artists like Olek and Nick Cave but that was being done forty years ago. 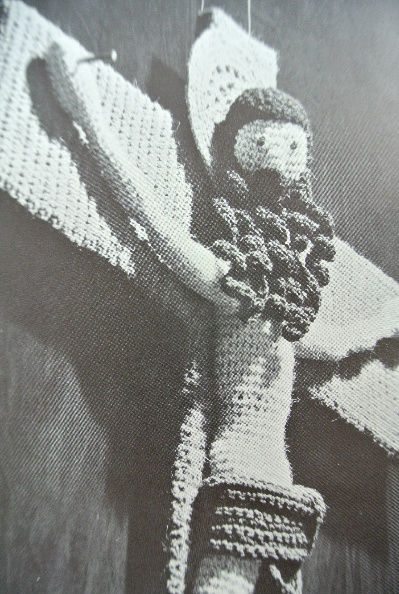 The book also has a crochet Christ figure by Jane Knight that reminds me a lot of the amigurumi style of crochet we often see today:

Meilach also shares crochet hangings with us from several artists: 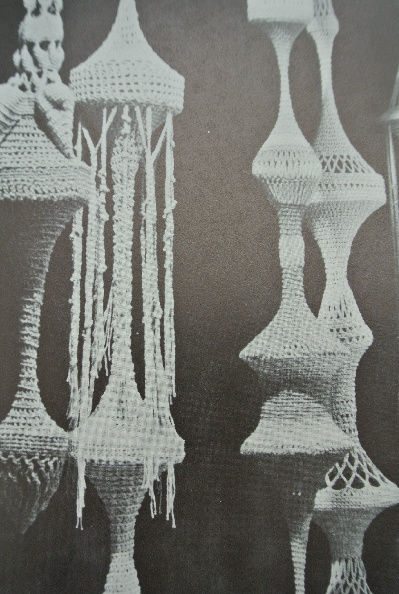 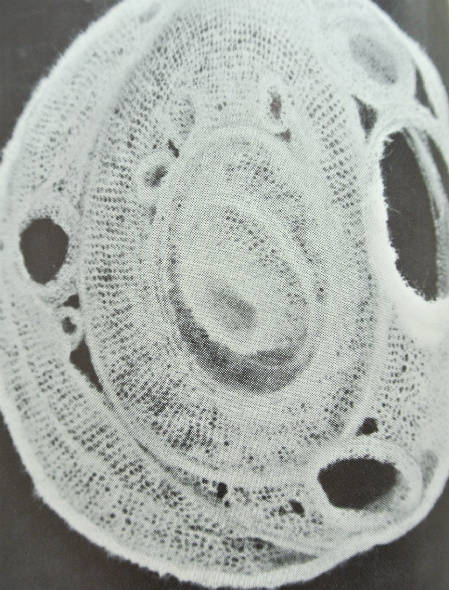 And she also highlights the use of crochet in jewelry and wearables: 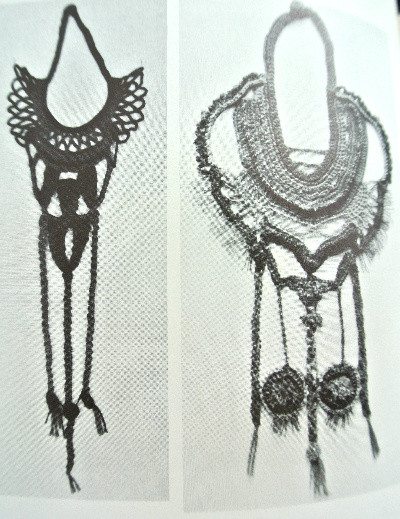 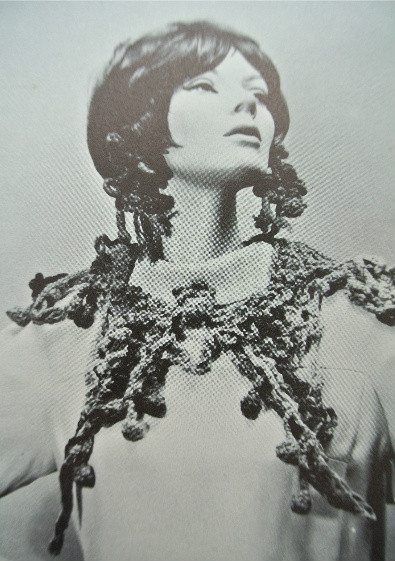 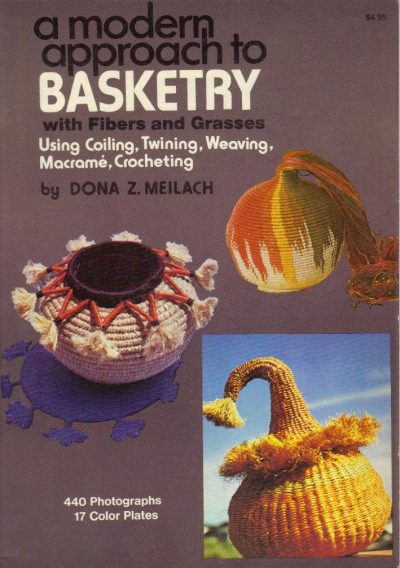 In 1974 Meilach came out with A Modern Approach to Basketry With Fibers and Grasses, Using Coiling, Twining, Weaving, Macrame, Crocheting

. The chapter on crochet features unique crochet baskets, similar in style to some of what we see in other books from this time like Mark Dittrick’s Hard Crochet but in the specific niche of being made with natural fibers. She features work from multiple artists including: 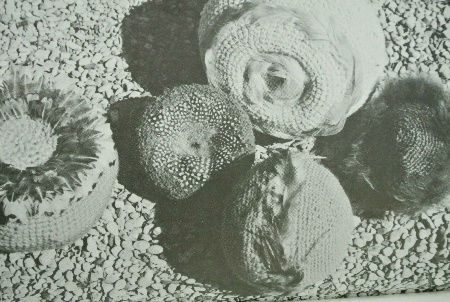 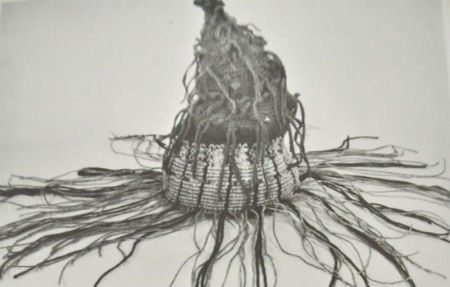 Lori Kratovil combined crochet and macrame to make this basket 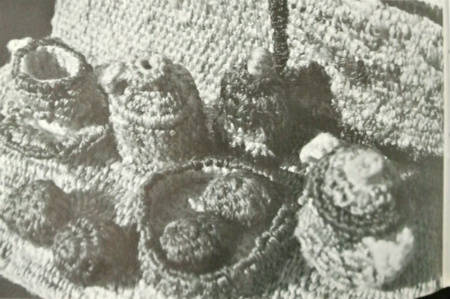 Renie Adams called this Still Life of a Still Life 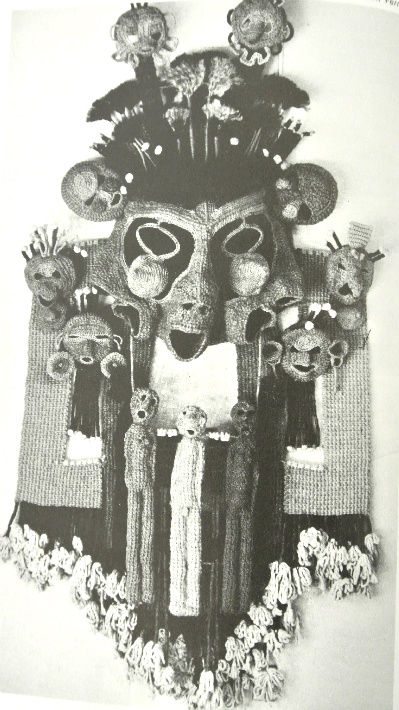 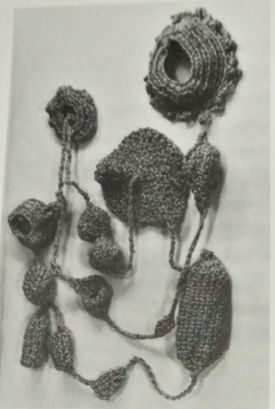 And here’s a basket wall sculpture by Esther Gotthoeffer 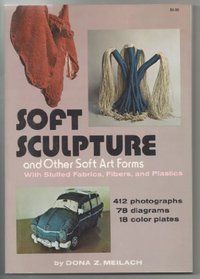 Side note: There is also this 1974 book on soft sculpture that I would bet has some crochet in it but I haven’t gotten my hands on a copy yet. You’ll be the first to know when I do! 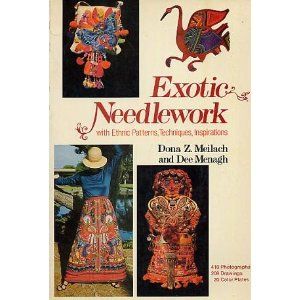 . It offers a comprehensive look at historical uses of needlework around the world. Unlike many of Meilach’s books, this one is more instructional with patterns and information on techniques and that includes a “how to crochet“. It talks a bit about crochet history and also shares photos of some pretty inspiring work. For example: 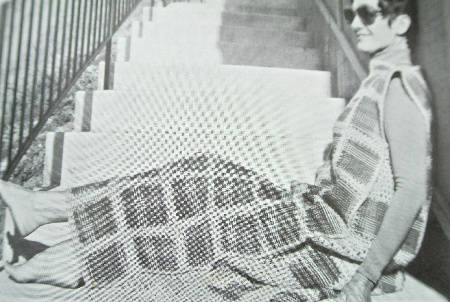 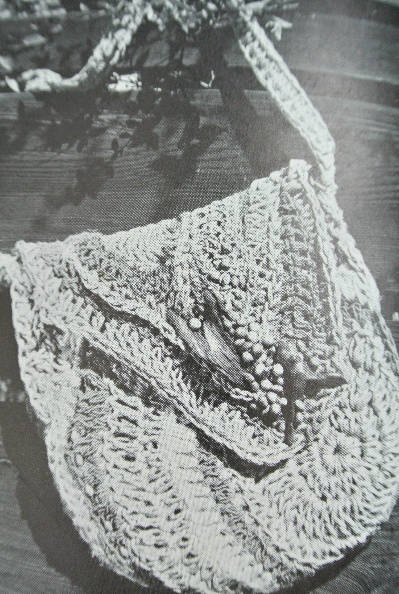 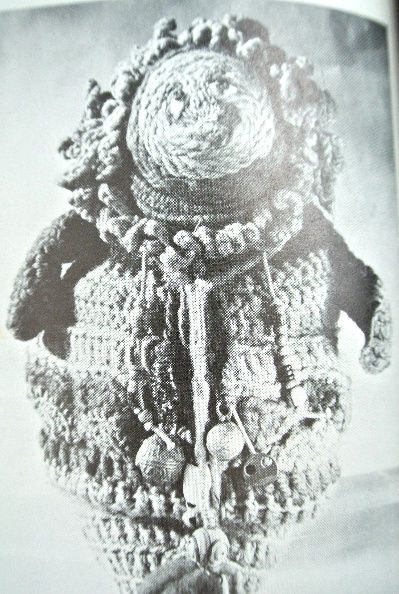 This whimsical doll by Linda St. Marie was crocheted with inspiration from Mexican dolls. Wish we could see the colors! 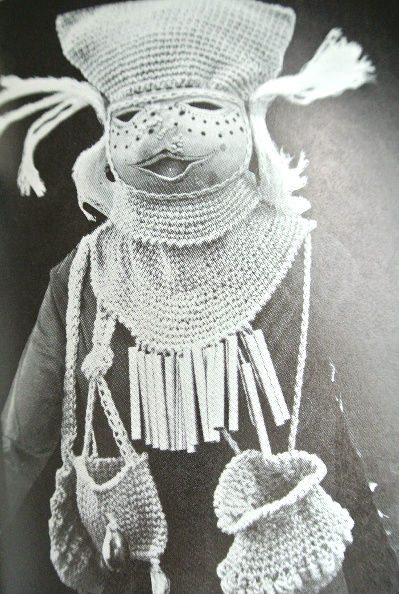 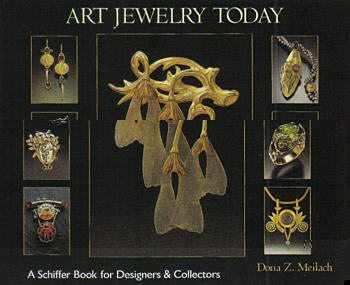 Dona Z. Meilach’s newer books also featured crochet from time to time. One example I know of is that her 2003 book Art Jewelry Today 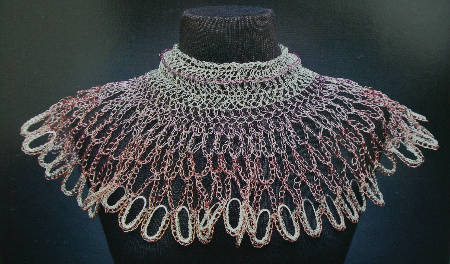 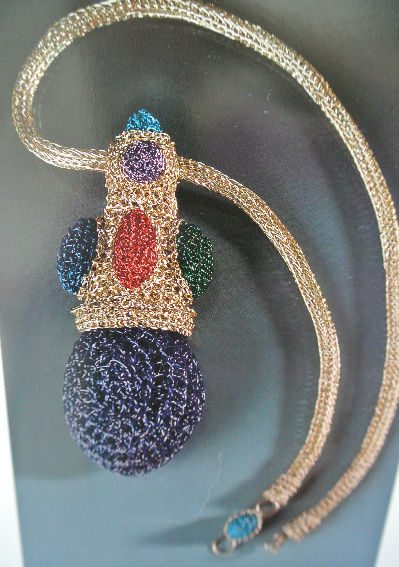 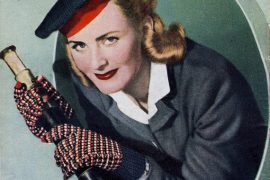