I recently wrote about my 365 project, a project I’d discontinued where I’d planned to photograph myself wearing different crochet styles each day of this year. I stopped the project for several reasons, and when I did I genuinely didn’t think anyone noticed. I was pleasantly surprised to find multiple comments on that recent post letting me know that people did miss those crochet style posts, they’d just assumed – mostly correctly – that I changed my posting schedule and couldn’t keep up the daily project.

I am so glad to know that people are interested in seeing how I style my crochet clothing and accessories. I think that crochet can be worn in many different ways. I think it’s fun to play with our clothing. I like to try to get the most out of different pieces by wearing them in different ways. And I hope showing people how I do it encourages them to be playful wearing their own crocheted items, too.

So, I’ll actually be bringing back a revised version of the 365 project starting in 2013. At that time I’ll do weekly “what I wore” posts showing any crochet that I wore during the week. This way I can challenge myself to wear new things and photograph them for you but I don’t have to commit to doing it daily. It’s easier to write one post than seven each week for sure! So I’m excited about that. I’d start it now except that my camera actually just broke and had to be shipped off for Nikon to repair it and I have no idea how long that will take. And I’ve got a Christmas giveaway project planned for next month so I don’t want to start this then. So it’ll be a 2013 project. 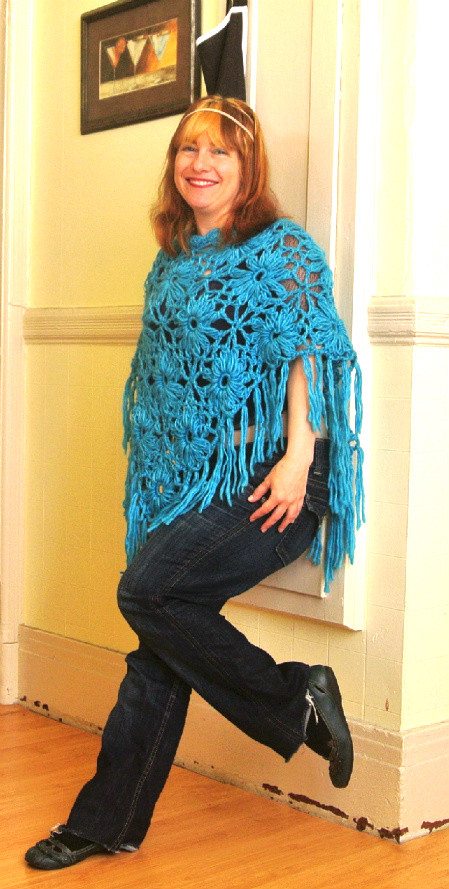 When I wore this crochet poncho earlier last year

But in the meantime, I figured I’d occasionally share how I wear crochet. In this case, you are actually seeing a poncho that was part of the 365 project. I didn’t make this one; it was a thrift store find. The first time that I wore it on this blog I wore it in traditional poncho style. I had mixed feelings about it. I think it’s a pretty piece but it’s made with really bulky yarn and isn’t made to drape really well so I felt kind of chunky and boxy wearing it. I wanted to try to reduce that feeling and get a sexier look out of the poncho. So here’s what I did …

The neck part of the poncho was just large enough for me to pull it down over my shoulders and make it into a strapless top. Of course, I wore a tank top underneath it since it’s a see-through crochet piece. I went with a matchig tank top so the straps wouldn’t look too weird (which would have been more successful had I worn a strapless bra – oops). I was going to try to wear it as a dress with tights but it was way too short for that. I tried it with a few skirts and it didn’t look right but I hit on something when I paired the crochet top with skinny jeans. The only problem was it looked way too maternity, so I belted it up high. I added chunky black heels, although you can’t really see them here … the purpose was mostly to elongate my legs. I was happy with the results. 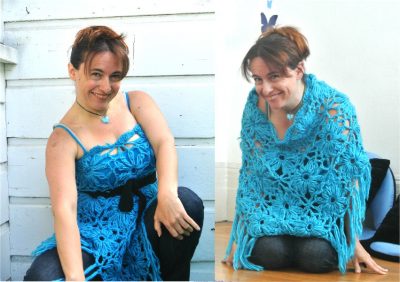 The nice thing was that I was able to wear the poncho like this for most of the day when it was fairly warm here in San Francisco. When it got chilly at night, I could unbelt it and pull it back up to it’s poncho style, covering my arms and keeping me warmer. Double duty – nice!