A recent news article about a woman who is trying to break a world record doing side jumps caught my attention because she previously tried to break the world crochet record for the longest chain. I had to learn more about her! 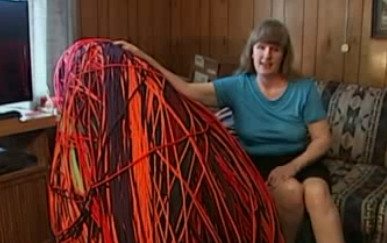 The news article that I read explained that Patricia Belcher is a woman who has been legally blind since birth but has been super determined not to let that hold her back in life. She’s engaged in a variety of bold life experiences from skydiving to volunteering as a Peace Corps worker. But something she hasn’t done yet, and really wants to, is get her name in the Guiness book of World Records.

She is currently hoping to achieve this goal by beating the existing world record for most side jumps completed in one minute. Hopefully the third time is the charm for her since she’s attempted two other records and not succeeded. She actually tried for two decades to train to beat the jumping rope record and finally conceded that she just wasn’t going to win that one.

It was after that when she decided to try to crochet the world’s longest chain. She did manage to crochet a 40 mile long chain, which she has wrapped up now in a big huge decorative yarn ball that is a testament to her efforts despite the fact that she didn’t beat the record. I’m so curious to know what she might end up doing with that huge ball of crocheted yarn someday!

Belcher is pretty sure that she beat the Guinness World Record for side jumps recently but has to wait to hear the official word from the judges. if so, she hopes that it will serve as an inspiration to other people – with or without disabilities – to always strive to reach your goals and push yourself. I love this, because her history shows how you can start over again and again and still get somewhere even if it doesn’t seem like you’re succeeding at first glance.

Forty miles sure seems like a long crocheted chain but Belcher highlighted in her news article (there’s a video at this link) that a woman in France had crocheted twice that. As I mentioned in my December 2011 roundup of crochet world records, that person was Anne Vanier-Drussel.

The other crochet records I mentioned in that post were:

When I first started learning about blind people who crochet it seemed amazing to me. Don’t get me wrong, I still think it’s amazing, but I’ve since learned that it’s not all that unusual. Several people that I interviewed for Crochet Saved My Life were blind or had failing eyesight and they explained to me that they can crochet by touch and body memory.

A few examples of other blind crocheters I’ve written about: