Is it just me or does it seem like the knitting community has become wuite welcoming to crocheters? I’ve got three recent examples from my own life to share.

It’s Not a vs. Issue

I’ve only been crocheting for a few years and I’ve only immersed myself in researching the crochet world for about eighteen months. When I first started learning about this world, I often read things about how there was this “knitters vs. crocheters” mentality. For example, I’d read a lot about local yarn stores that were knitting-focused to the exclusion of crocheters. Or I’d read about knitters who would look down their nose and say, “oh, you only crochet?”

I have to say that I haven’t had this experience too much. I’ve had the occasional knitter react this way and it’s happened a couple of times with yarn store owners but it’s definitely the primary reaction that I’ve had. And I don’t think I’m alone. From all I’ve read it seems like even a few short years ago there was a lot of this “vs” mentality – you either knit or you crocheted and that defined your clique. But that seems to have changed, perhaps thanks to the efforts of sites like Crochet Liberation Front and knit/crochet designers who have encouraged the yarn community to come together rather than to be divisive.

Maybe I just got lucky and came into the crochet world at the right time, a time when more and more crafters of all kinds accept and embrace that our craft is just as great as any other! 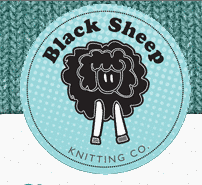 I wanted to share a few examples of how knitting-focused places have been welcoming to me as a crocheter recently. I’ll start with the exciting news that my book, Crochet Saved My Life, is now officially in its first brick-and-mortar yarn store. That’s so exciting! It is now being carried by The Black Sheep Knitting Company in Needham, MA. As the name suggests, they are (like many yarn stores) lovers of knitting and in fact their slogan is the “handknitter’s haven”. But they also work to include crocheters because they know that we’re a part of their customer base as well.

Their “about us” doesn’t specify anything about knitting. They say, “Our goal is to create a welcoming experience for our customers. We love to see familiar faces and look forward to meeting new fiber enthusiasts!” And they do offer some crochet classes along with their knitting classes in the store.

Now, Crochet Saved My Life focuses on crochet but many of the benefits of the craft discussed in the book apply to knitting and other crafts as well. Nonetheless, it’s got crochet in the title so the majority of people who will pick it up on first glance are likely to be crocheters. It’s great that a yarn store like Black Sheep Knitting is willing to support this new crochet book! 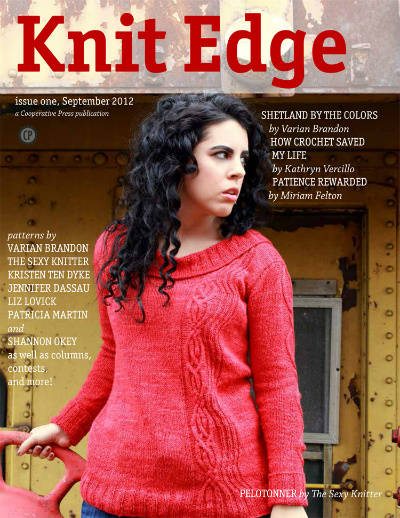 So, a yarn store that has “knitting” in the name welcomed my book but a yarn store is for all yarnies. So what about a knitting magazine? There’s a brand new magazine that just came out last month called Knit Edge. Based on the name, you know that it’s intended primarily for knitters. But in their first issue they welcomed an article from me about my book. It was a terrific honor to be included in this issue.

Now, you might be thinking that again the book isn’t crochet-only despite the title, and that’s true. But in a blog post Shannon Okey of Knit Edge confirmed that not only did this first issue have crochet-related things but that future issues will as well. Crocheters are welcome to be a part of this new knitting magazine. With so many people being bi-craftual, this only makes sense!

And I should say that I’ve recently seen many knitting magazines post calls for submission that do say that they’re willing to consider some crochet designs and articles for their publications. Now since I’m a crochet-only needleworker it’s the crochet magazines that interest me most personally but I think it’s great when a little bit of another craft is thrown into any niche magazine. And of course there are also publications, like the online magazine Tangled, that are equally welcoming to crochet and knitting. 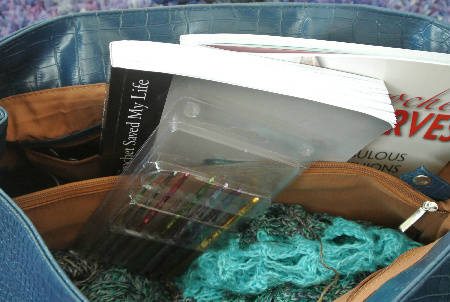 Finally, I wanted to point out that retail companies, such as Jordana Paige, are increasingly making sure to support the work of crocheters and not just knitters. Jordana Paige makes beautiful stylish bags that are designed to carry yarn projects and tools. These were originally called knitting bags but the company has made a huge effort to work with crocheters as well. I’ve seen several crocheters write positive reviews recently about the company’s Tool Butler, which is an organizing case for hooks, needles and notions.

Jordana Paige does profiles of crafters on their blog. These used to be called knitter profiles. However, they recently welcomed me to be the first crocheter with a profile featured on the site. They changed the name of these profiles to Fiber Fashionistas in order to recognize that knitting is wonderful but so are all of the other fiber crafts. And I have no doubt they’ll continue to feature crocheters on the site in the months to come.

I would love to know what you think … has it been your experience that people whose primary craft is knitting are welcoming to people who mostly/ only crochet?