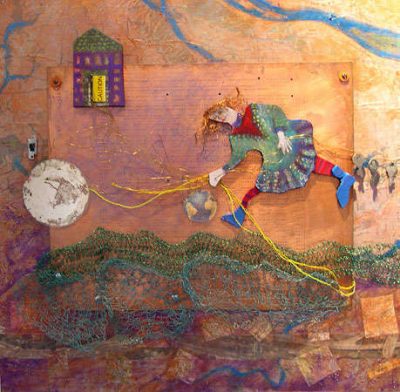 I mentioned in my post about Mona Mauri that one of the best things to come out of writing my series of articles about 1970s crocheters is that several people from that era have contacted me to let me know about their work then and now. Today I’m presenting another one of these great artists to you – Bonnie Meltzer.

Bonnie sent me an email to let me know about her mixed media artwork that incorporates wire crochet in structural and textural ways. I am always happy to follow the links crochet artists and designers send to me and this was no exception. But something nagged me about Bonnie’s name and I eventually remembered that I knew it from my research into crochet designers from the 1970s. Her work has developed since that time and now she does this great work that combines found objects (often old computer parts) with crochet wire. She assures us in her bio, “The crochet doesn’t play second fiddle to the found objects but in work that has so many disparate elements it links it all together visually and sometimes even structurally.” An article from Portland Open Studios reveals that Bonnie says she was born “with a crochet hook in her hand”. Bonnie began exhibiting her work in a group show in New York in 1969 and has had regular exhibits since then including several solo exhibits in Portland in recent years.

Bonnie Meltzer designed the Grandma and Grandpa figures that are shown in The Crocheter’s Art by Del Pitt Feldman. This wasn’t listed on her website anywhere so I checked with her to make sure she was indeed the artist and she is. She mentioned that this piece was also featured in some other books. 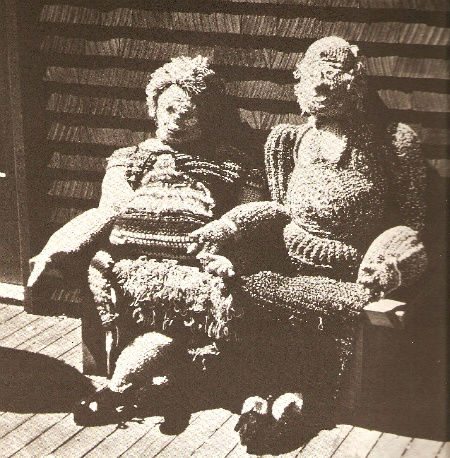 The Grandma and Grandpa Figures were life-sized crochet pieces that were designed to be sat on.

Additionally, she said that two of her crochet costumes were the frontpiece in Clinton McKenzie’s book New Design in Crochet

and I see from the bio on her site that she also had work in a book by Dona Z. Meilach called Creating Art from Fibers and Fabrics

. Both of those books came out in 1972. More recently she’s had work in two books by Arline Fisch: Textile Techniques in Metal

published in 1996 and Crocheted Wire Jewelry

Bonnie Meltzer is living in Portland, Oregon where, as her website explains, she makes “very mixed media figuartive and abstract sculptures which transform everyday objects, crocheted wire, digital photographs and painted wood into layers of tactile surfaces, social commentary and humor”. Some of her work has a distinct environmental message, some serves as a portrait of sorts, some has a clear sense of humor … I enjoyed looked at all of it and encourage you to enjoy the fully extensive gallery of photos on her site. 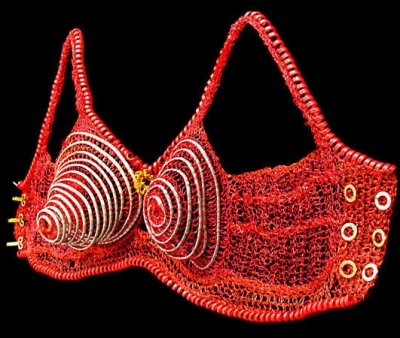 20th Century Cups is a crocheted wire bra … reminds me a little of Madonna in Gaultier! 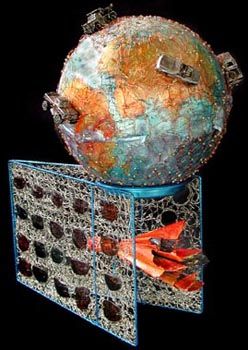 Global Warming is part of her mixed media globe series. 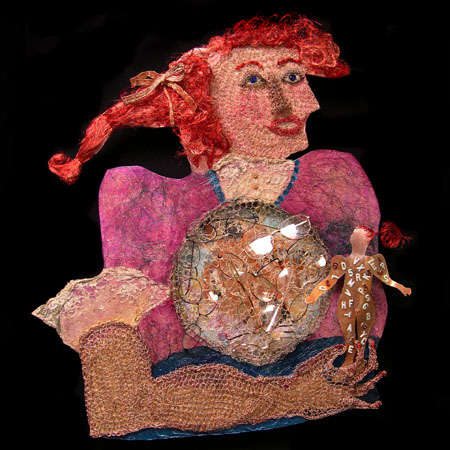 In Sight is a portrait on wood using crocheted wire and found objects, the artist describes it as “one of the cut out series made by cutting a void in the wood exposing a deeper layer or letting us see through a transparent veil. This one is about gaining insight through the melding of intellect and emotions.” 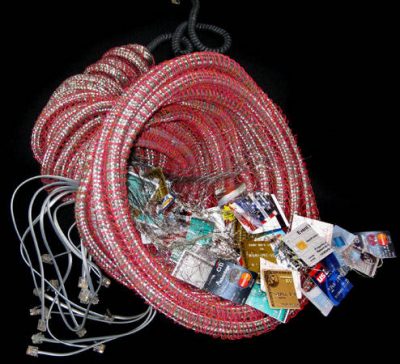 Meltzer also does some painting, altered book art and web design. Her current art differs from the early work we saw, of course, but she retains this great figurative feeling from that Grandma and Grandpa piece. I love that she’s worked crochet into her repertoire of work in a new way over the years.

Crochet Art Then vs Now

I asked Bonnie if she could think of any differences about crocheting now vs. being an emerging crochet artist in the 1970s. She answered, “mostly I would say that no one laughs at you when you say crochet NOW” as opposed to then. Part of why I love celebrating the work of these artists is because they really helped pave the way for the eventual acceptance of our craft by the arts world and the general public!