About a month ago I did a post showing you a bunch of large granny squares I had in the works including a set of crochet rugs for my hallway. I completed those rugs and have had them in the hall for a few weeks but I’m undecided about whether or not they’ll be staying there after all.

The four rugs have some similarities between all of them. They all have the same center – a square made of a bulky black,white, brown and pink yarn. They also all have the same border which is made from silver alpaca fiber. The alpaca fiber was a dumb choice and is a great example of what happens to me when I go to my LYS instead of shopping online. Most people that I know say they shop better in person but I shop much worse. I don’t know why I can’t seem to think through my purchase carefully but I never can. In the end, I didn’t really like the silver color with the rest of the colors in the rugs. But that’s not the real problem. The real problem is that the alpaca is so soft and smooth that it slips a little bit on the hardwood floor and that seems like it could be dangerous over time. I can just see stumbling to the bathroom in the middle of the night sometime and ending up flat on my face with a sprained ankle and a chipped tooth. I may just add an extra round of bulky yarn around each of them in a thicker texture to make them stick better to the floor. 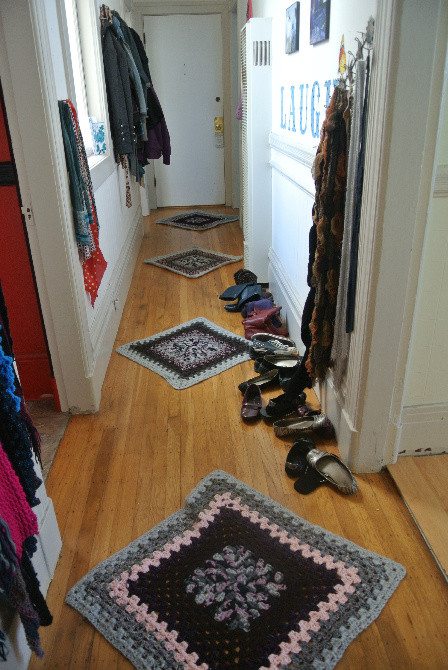 The squares aren’t all the same although they have similar color schemes. In some of them I made a bulkier yarn for certain rounds by holding two strands of worsted together. The two center squares are two rounds smaller than the other two. This was a yarn issue but it works out well because the center of my hallway is more crowded anyway. All in all, I’m happy with how well they tie together. But I’m not sure that I like them as rugs. I think my personal style is shifting and I might prefer something less busy … a set of single neutral color doily rugs or something like that. So I’m thinking that in the end these four squares might be joined together with some extra work around them to make a crochet quilt. We’ll see. For now they’ll stay on my floor and at some point down the line maybe they’ll get repurposed. 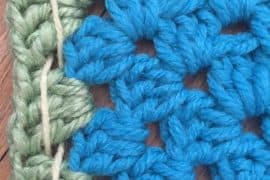 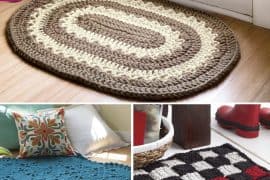