It’s Sunday and that is when we take a look at what was happening on this blog one year ago and what’s changed in crochet since then. At this time last year was when I first got the idea and announced the Hookin’ Up crochet blog project. It ended up being a really cool thing where thirty bloggers did reviews/ interviews with each other in a pay-it-forward style project that lasted all month long. You can find links to all of those posts here. It really was a great project and now that I see that it’s been a year since we did it, maybe I should do another one. What do you guys think? 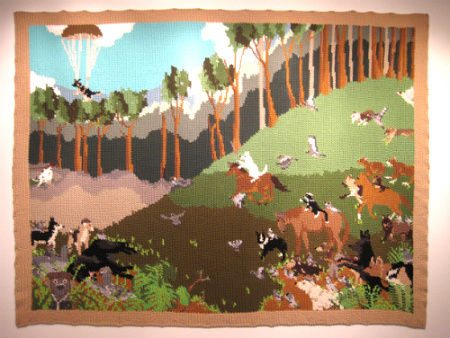 The artist I profiled at this time last year was tapestry crocheter Rachelle Vasquez. Rachelle does animal shaped scarves as well as more detailed crochet landscape art (like the one shown above). Now that I’ve looked again at her work, I think that the piece above may be one of just a few pieces like it; there aren’t too many crochet landscapes like it in her portfolio. Nevertheless, it’s a beautiful work of art worth celebrating. Here’s a detail of part of the crochet work from that piece: 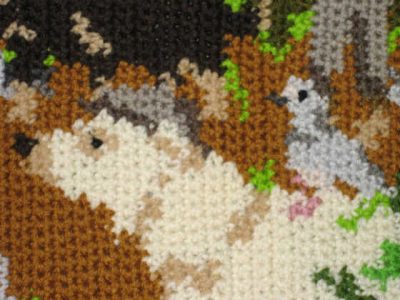 One of the cool projects she has on her website now that I don’t remember seeing last year is a series called In Memoralium where she has crocheted tributes to each of her pets that has passed away. Here’s one of those:

Vasquez is currently an artist-in-residence at the Houston Center for Contemporary Craft. Her bio on that site explains that she “picked up crocheting on a whim in 2006” and it just felt very natural. She does a lot of research-oriented work relating to nature and animals and she has an in-depth process involving lots of pattern planning.

Also at this time last year crochet artist Olek was trying to raise money through Kickstarter to fund a film called Yarnana. The film was a collaboration between Olek and two other women, showcasing Olek’s crochet as part of a silent film love story. Unfortunately, the film only raised $4600 of a $30000 goal so the Kickstarter funding was canceled. To my knowledge, the film was never made although there are some cute trailers out there like the one above. 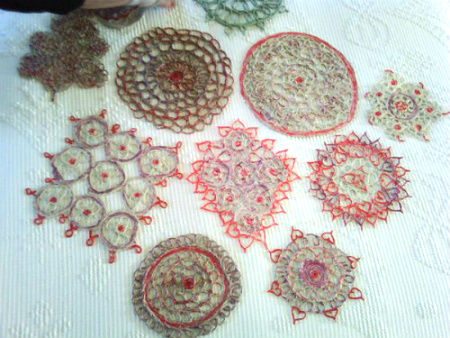 If you can’t tell what the above image is, it’s the work of Helen Avagyan who was trying to crochet with gum. Technically I don’t think they were crocheted. She chewed the gum, stuck it in water to freeze it and then shaped it into designs meant to look like crochet. Still fascinatingly cool. If you want to see someone who actually crochets with food, though, you can check out the experiments that @CrochetLibFront has done crocheting with bacon and making crocheted cheese. 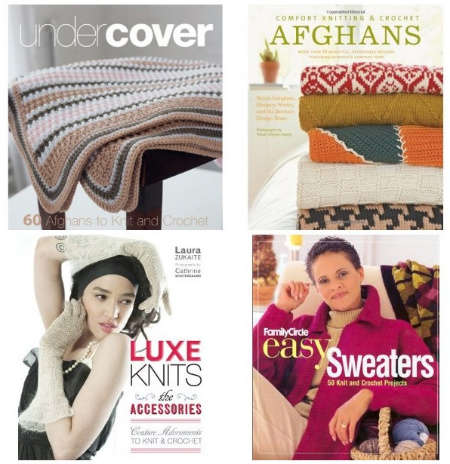 I did four brief reviews of books that were primarily knitting patterns but also offered something for crocheters. They were:

1. Under Cover: 60 Afghans to Knit and Crochet

Under Cover had the most crochet patterns but I found Luxe Knits the most inspiring in terms of just pretty designs to look at.

A new app program started circulating among crochet bloggers because it made it easy for them to create apps for their blogs. I shared that Crochet Liberation Front and KRW Knitwear had both launched new crochet apps. Shortly afterwards, I figured out how to use the program myself and I set up the Crochet Concupiscence Android App. 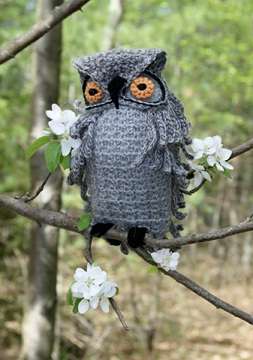 Hooter by Nicky Epstein was one of the free crochet owl patterns available to people who want to participate in Give a Hoot.

And I wrote about Give a Hoot, a project encouraging people to make crochet owls for kids in foster care. A lot of great owls were made, which you can check out on the Facebook page for the project.

The House of Holland granny square clothing was all the rage on the runway and I loved this video that featured the clothing:

Bay Area shoe designer Anyi Lu came out with a bridal collection that included crochet shoes. I recently included a pair of her crochet bridal pumps in a roundup of crochet wedding inspiration.

I shared that Etsy crocheter @nerdJERK had started vlogging. Here’s a vlog post from a few months ago:

You can see what nerdJERK has been up to even more recently by catching up on her blog.

I shared five feature items from crocheters on Etsy: 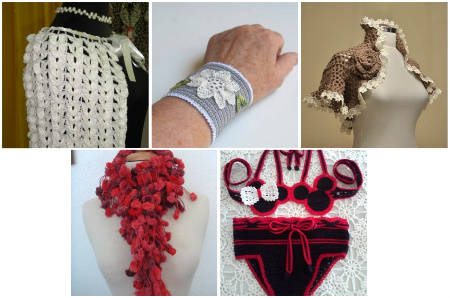 And here’s something that those Etsy stores have now: 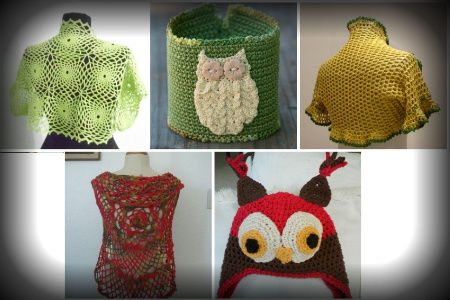 I put together a compilation of 25 great crochet quotes. And I also shared these new quotes:

“The best thing about crocheting is the instant gratification; it goes so much faster than knitting and if you make a mistake, just undo the mistake, no big deal, unlike knitting.” – mhandmade

“I’ve gotten interested in how art gives us this power in the outside world. When I first put up yarnbombing on a street I was startled by how the street changed, the domestic colorful knitting made the street look new. A lot of people stopped and fiddled around with the knitting for a moment, they would get in a more cheerful state . I thought you had to go through layers of permission to change a city-with yarnbombing you don’t.” – Streetcolor

“As I study the patterns popular among crocheters who came before me and work the same stitches that were worked by fellow crocheters over a century ago, I feel a special connection. Despite our time and cultural differences, we still both find meaning in the beauty and elegance of crochet and are constantly trying to improve our crochet skills and learn new techniques.” – Toni Rexroat

“What is amazing to me as an amateur anthropologist is that we who crochet have a culture, we have a language, and it’s developed without having a history of mass groups of people doing it together.” – Laurie Wheeler

“I did think I was alone in this phenomenon, the collection of half finished items that is, however belonging to a couple of internet crochet groups I have discovered I am not alone. Maybe it is a disease that us “hookers” get. Certainly a malignant condition however not fatal, unless your stash falls off the shelf and smothers you. Assuming I am going to complete all the things I have started and all the things I want to do, not to mention things I haven’t thought about to use up the embarrassingly large amount of yarn I have, I will live forever. The secret of immortality revealed.” – Crochet Spot

Here’s What I was Up to A Year Ago: 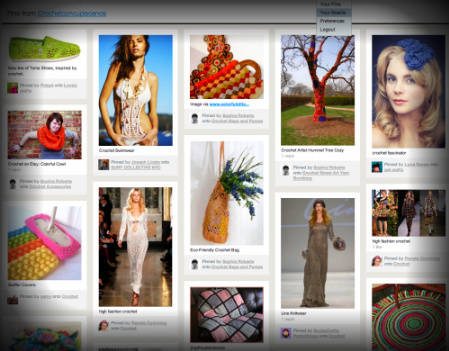 At this time last year I was just beginning to explore Pinterest as a crocheter. I had discovered the site early on but wasn’t using it a lot then. I wasn’t even sure if I was going to start using it more but I was noticing that people were starting to pin images from this blog. As you probably know, I’ve since begun to use Pinterest regularly to collect and share crochet ideas and inspiration. I’m regularly adding new crochet-related boards; the most recent ones are for crochet for the home, colorful crochet and the best monochrome crochet. I also added a board for yarnbombing. 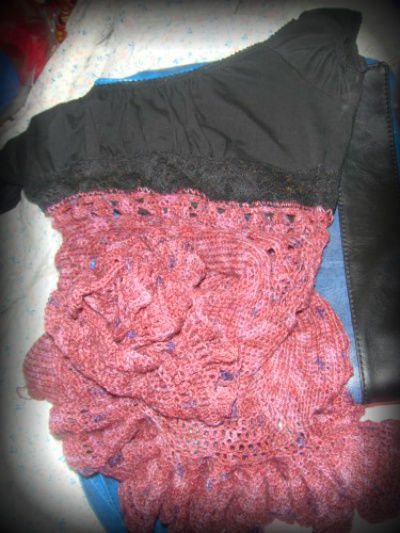 I shared photos of some of the crochet-related stuff I picked up on a trip to visit family. The dress above was a work in progress at the time but eventually it had to be frogged because I just made way too many crazy mistakes with it. It’s too bad, because the yarn was yarn I really loved from Candy Skein, which was also the indie yarn sellers I profiled at this time last year. The crocheted part of that frogged dress actually became a decorative flower bouquet in a vase in my kitchen for awhile but now it’s actually part of a group of pieces I’m going to work into a mixed media art project:

It’s kind of funny that the dress piece ended up becoming a flower bouquet later because at this time last year I was also making hyperbolic crochet flower bouquets: 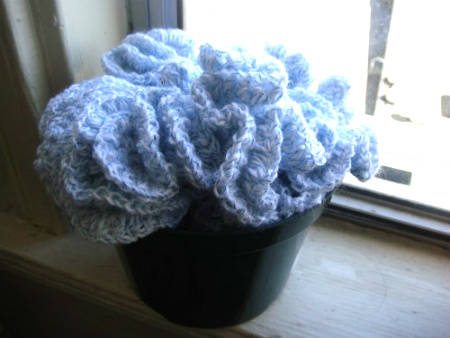 Did you miss any of these posts last year? You can visit the originals using the links throughout the post.