At this time a year ago the Crochet Concupiscence blog was turning six months old. Now it’s eighteen months old. Happy half birthday! Let’s take a look at what was going on here a year ago and see if we can find some related updates for today. 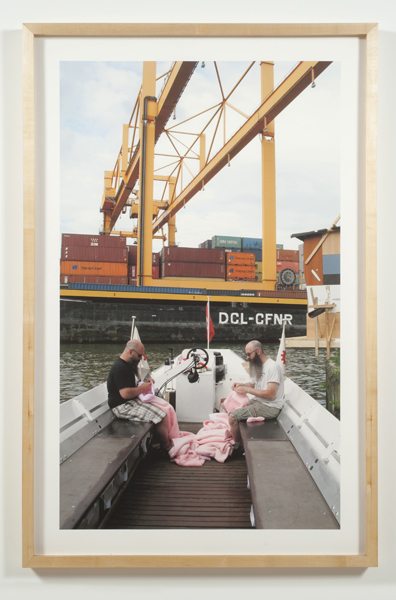 The crochet artists I profiled at this time last year was a male art duo: Miller & Shellabarger. These guys are partners in life as well as art and they do a variety of different collaborative works in different mediums. Crochet isn’t the bulk of what they do but they do have this really fascinating ongoing art project where they crochet together in public. They work on this really long piece where each of them is crocheting at the opposite end of the work as the other and the work grows between them. It’s interesting because they are crocheting in public where people can watch them, they are crocheting in different settings which changes the tone of the piece and they are two burly guys crocheting which you don’t usually see.

It’s also an interesting because this crochet piece reflects the changes in their relationship over time. The work is currently on display at Inova in Milkwaukee in an exhibit called Hiding in the Light. Journal-Sentinel writer Mary Louise Schumacher writing about this exhibit shared these thoughts on the crochet piece: “When the Chicago-based couple started the needlework in 2003, they had to sit close together, of course. Today, they can choose to sit in separate rooms, out of sight from each other, or huddle close with the pink artwork piled between them, a physical manifestation of their relationship. What couple in a long-term relationship can’t relate to this accumulated heap?” 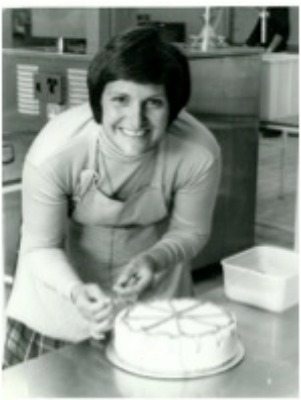 The book I wrote about at this time last year was Pauline Turner’s Finishing Techniques for Crochet which I think is a good book for going over the basics of crochet, advancing to more detailed techniques and refreshing certain skills such as adding buttons to your crochet garments.

At this time last year I was intrigued by how crochet was used as a word in a rap song. That song wasn’t actually about crochet, though, but later in the year I shared a link to a crochet song by Dora Ohrenstein that was offered as a free audio download on Crochet Today. I decided for this update to look around for some other crochet songs. I found this on YouTube:

and this kinda scary one where Julie Ruin screams “you make me want to crochet”:

I wrote about the Same Sky jewelry project (@sameskybracelet) which helps provide a living through crochet to HIV+ survivors of the 1994 genocide in Rwanda. They are a “trade not aid” organization, and I’ve since written about quite a few of these great fair trade organizations that help people through artisan crochet. 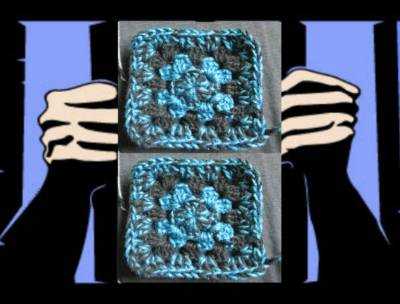 I also wrote about 5 crochet prison programs. I’ve since done quite a bit of research into the many different crochet programs that there are for prisoners. There are programs in all different types of facilities (minimum and maximum, women’s, men’s and juvy centers). Most of them use donated yarn and the participants then crochet items for charity, offering a way to give back to the community through their newfound skill. Some of them actually go on to teach crochet as a certified skill for earning income upon release. 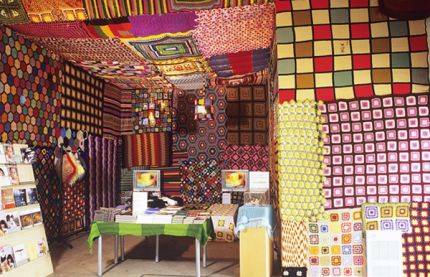 I also shared ten ideas for livening up a dull space with crochet. One idea was to create a wall of textured wallpaper using crochet, which is something that I still really want to do myself. Another was to crochet your own flowers for an indoor garden which is an idea I mentioned again recently in my roundup of indoor crochet gardens. What I didn’t suggest here was to yarnbomb an entire room which is something that we see above in a room that is part of my recent roundup on crocheted rooms and tents.

I did a roundup of 25 designers who have put crochet on the runway. I’ve since explored the work of a few of these designers in more detail through my Designer Crochet Project posts.

I shared five feature items from crocheters on Etsy:

And here’s something that those Etsy stores have now:

“The most remarkable feature of Noro yarns is their unique and striking color combinations. Eisaku Noro’s artistic sensibility is apparent in the painterly palettes of his yarns, which are all hand colored. Each ball or hank passes through a spectrum of striking shades, whether serene, earthy hues or rich, saturated jewel tones.” – source

“Looking for and buying materials is an important part of the creative process. It can also be a genuinely fun experience!” – Ariella Nachson

“For those of us who share a passion for the creative arts, fabric is so much more than just the medium for creating fantastic clothing, beautiful home decorations and unique craft projects. Prints and patterns are artistic renderings that impact us in the same way a work of fine art does.” – source

“My work begins with an idea, and I then choose the materials and processes that best bring the idea to life. I use crochet because its symbolic possibilities are endless.” – Carol Hummel

“A stunning button can be the perfect embellishment against a crochet texture.”– source

Here’s What I was Up to A Year Ago:

I was making crochet carnations based off of Drew Emborsky’s crochet pattern to add to his Carnation Bouquet Afghan Project.

I also explained why I prefer yarn buying online. This remains true to this day. I recently went to the LYS near me because I wanted to get some yarn that day for a project. I hadn’t bought yarn in person in more than six months and the whole experience was really anti-climactic. It wasn’t bad … but I ended up paying too much for yarn that ended up not really exciting me that much when I went to go work with it. In contrast, I am still excited today to use yarn I ordered online three or four months ago. So, for me, buying online just works, although I know it’s not right for everyone.

And finally I explained how I approach crochet pattern design.

Visit the links throughout this post to learn more about each of these things!