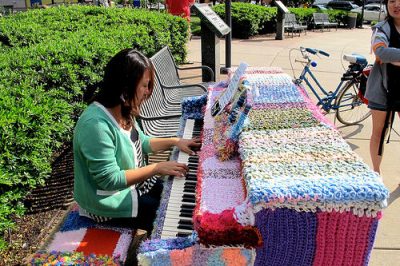 Eight different artists have took over eight different Pennsylvania public spaces last week by placing art-covered pianos on display for an outdoor exhibit called “Heart and Soul: The University City Public Piano Project“. Each artist was chosen for their unique talents in different areas of art and asked to completely transform the piano into a welcoming piece of artwork. 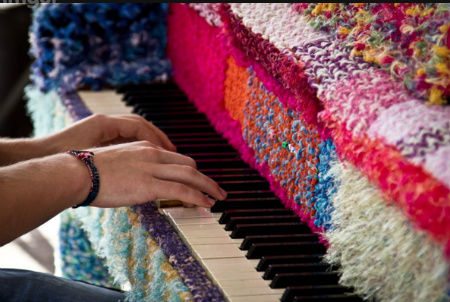 The idea behind this project is that anyone from the public can come up to the piano and play it, creating an interactive exhibit filled with music. You never know what might happen! But of course, the piano has to be inviting first. Fiber artist Melissa Maddonni Haims (who I recently profiled here) wanted to make her piano “the most huggable“. Who doesn’t want to cuddle up with crochet and knitting, right?

Haims piano was located at Drexel University on 33rd and Market in the University City District of West Pennsylvania. Her bio on the project’s website says:

“As the youngest (and most rebellious) of five children, Haims was the one that drew on the piano with indelible marker. She was delighted to be asked to “draw” on a piano again, only this time with yarn: wrapped in a wonderful and unexpected collection of bits of wool, cotton and even plastic bags; the perfect combination of her mantra: knit, play, love.” 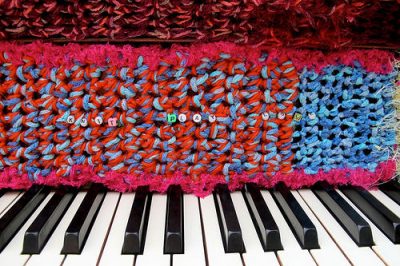 I think that this is a super cool project and I’m happy to see it. But I do have to say that it’s not new …there is a New York piano festival each year based on the same idea of placing art-covered pianos in public spaces for people to play and last year one of the pianos was covered in crochet by Olek: 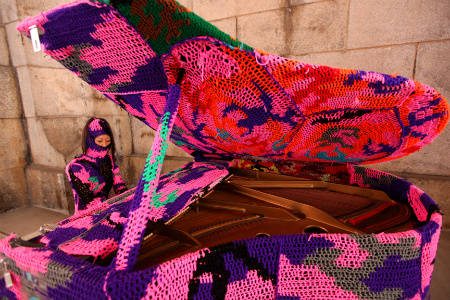 Which fiber art piano do you like better: Haims’ or Olek’s?