The first time that I heard about crocheted pop top accessories it was because I had just discovered the work of Escama Studio, a fair trade crochet organization based in San Francisco that works with artisans in Brazil. Since then I’ve seen lots and lots of crocheted pop tab items, including several others that are sold through fair trade organizations that support crocheters in other countries. In fact, I’ve learned that there’s a well-established program in Brazil where can collectors can get paid by collectives for pop tops and then those collectives can make crocheted accessories with them which are then sold to businesses like Escama Studio to help the workers earn a fair wage doing a traditional craft with recycled materials.

I have to give the most attention to Escama Studio for three reasons: 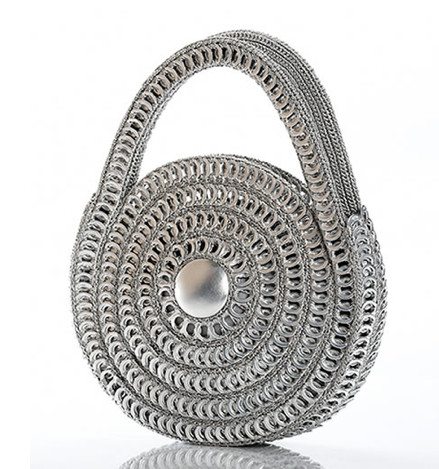 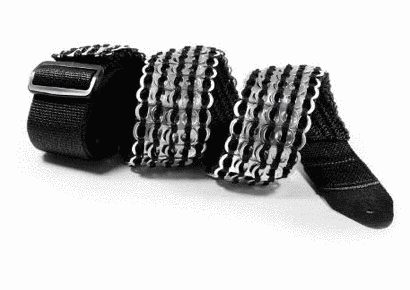 Walleska Tepping is originally from Brazil but moved around a lot, landing here in San Francisco for awhile, and now has a company called Walleska EcoChicc that is based in Texas. The company allows her to help support artisans in her original home. She shares on her website an explanation of why this type of work is important and relevant:

“Walleska likes to emphasize the community upon which all knowingly and unknowingly participates. From those donating their soda cans to those collecting garbage on the streets, cleaning each individual tab, from the hands of the Brazilian and American artisans to the boutique to the final consumer, the Ecochicc process has become a means to satisfy a creative and globally driven process- simultaneously; creating a system upon which all involved are supportive of one another.”

I love two things about this brand. First, the crochet is very apparent in this work whereas it’s often a small part of the design of other businesses in this line of work. And second, the brand has some really cool wearables and accessories that are unique from the rest of the market like the belt below that includes a decorative fused glass buckle. 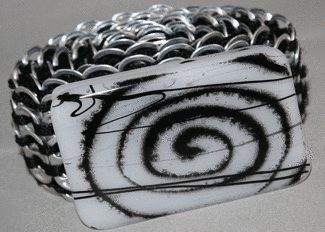 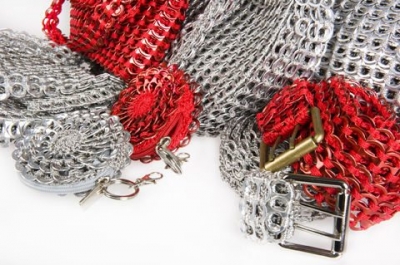 This is an Australian label that I just discovered and really love. They also get their crochet pop tops from Brazil. A recent news article explained that “the ring-pulls are collected by Brazilian “catadores”, or can pickers, who are authorised by the Brazilian Government to sell them to collectives that have been set up to run recycling/upcycling projects.” From what I understand, the pop tabs are sold to the collectives and the collectives are made up of artisans that crochet the products that are then sold for a fair rate to businesses like Coussinet, which is how most of these labels work. This label has lots of other products in addition to these and although I don’t know if any of them have the same sort of fair trade benefits as the pop top creations I do know that I love lots of their fun, funky designs. 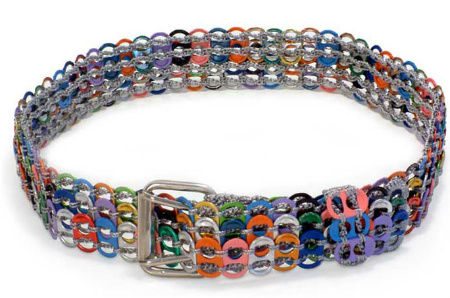 NOVICA is an online market designed specifically to help artisans and artists around the world find a place where people will pay fair prices for their work. This is a well-established business based in Los Angeles but working with people in South American, Africa and other far reaches of the globe. They aim to preserve traditional handicrafts like crochet while helping people in those countries earn a living and bringing quality products to buyers. A search through the site turned up lots of pop top crocheted belts from Brazil like the colorful one shown above. 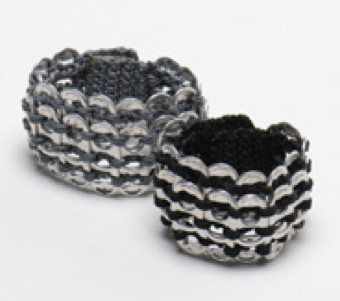 This is an organization that works a little bit differently in the sense that it focuses on selling the end product not to individuals but rather to companies that are seeking to engage in socially responsible buying. So for example if I run a business then I might choose to purchase items from them to use as corporate incentives for my employees. The items come from artisans in other countries. I chose to include them even though they aren’t working specifically with Brazilian artists because they have some pop tab items that are similar to the Brazilian style like the Tatiana Bracelet above which comes from artisans in Honduras.