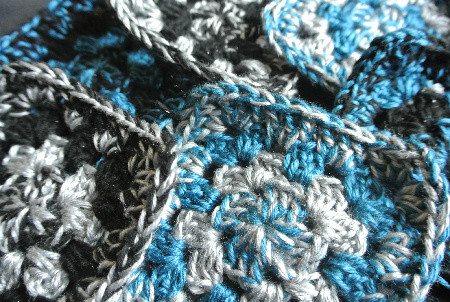 Ask Bob Roskamp how often he crochets and he’ll tell you that he’s got a hook in hand every time he sits down. The 82-year-old guy is a constant crocheter who donates blankets to charity.

How It All Began

Bob Roskamp learned to crochet from his mother when he was a child. She also taught him and his three siblings who to knit, sew and embroider. Roskamp hadn’t done any of that in a long time but then his own daughter got him re-interested in the craft by purchasing him an afghan crochet kit.

Getting Active with Charity Crochet

Roskamp really got active with his charity crochet work in the late 1990’s. At that time he went on a mission trip to Romania and took some blankets along for the families who were hosting him there. He really saw how beneficial and welcome the crocheted blankets were and it set him on his own personal mission to really ramp on his charity crafting. He started crocheting blankets for members of the local church where he was staying in Romania. Then he started learning about Romanian orphanages and realized that he could also done his crochet blankets there.

Donating Around the World

Roskamp has returned to Romania on five different occasions with crochet blanket donations. Romania isn’t the only place where he donates his crafts, though. He creates blankets of love for orphanages in other parts of the world, too, such as in Mexico. He also makes other crochet items for donation, like preemie caps.

His Own Unique Crochet Hook

The original source of this article, Jennifer Ackerman-Haywood of The Grand Rapids Press, noted that Roskamp doesn’t use a regular store bought crochet hook to make his blankets. He has created his own crochet hook by fashioning a hook on to one end of a two and a half foot long dowel. He uses the hook to “manager more than 100 stitches at a time” which suggests to me that perhaps he’s doing something like Tunisian crochet. (Now that I think of it, that makes sense, since Tunisian is also called afghan stitch crochet.)

So How Much Does He Really Crochet?

It is probably true that Roskamp is crocheting pretty much any time he’s sitting down. I say that because he completes his full-size crochet blankets in just over a week each.

I often joke that I wish I had a fairy that would weave in my ends for me. Well, Roskamp has one. It’s his wife, Helene. She used to crochet but now she leaves the bulk of the work up to him and just weaves in his ends for him. I think that’s awesome!