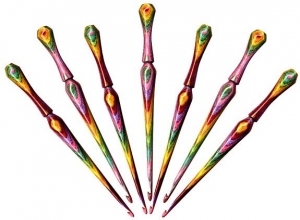 Anyone who follows this blog steadily knows that I have a soft spot in my heart for stories of really old women who are still wielding their crochet hooks. What I love even more is those old crocheting women who totally defy the stereotypes of what you can do as an elderly person. So I’m totally loving Anna Manna Durham who recently turned one hundred and celebrated by taking her first helicopter ride. Super cool.

Durham is a Lubbock, Texas woman who celebrated her 100th birthday on November 2nd. A great nephew of hers found out that she had always wanted to take a helicopter ride and decided to go ahead and help her have that dream. She says she wasn’t afraid at all. This tendency to lose fear in older age was confirmed by the helicopter pilot who said that people over eighty are always just excited to go up in the helicopter whereas younger folks have more fear.

Like many of the older crocheters that I have mentioned on this blog, Durham is one of the oldest residents of her area. She received an honor last year for being the oldest living graduate of Abernathy High School, the school she graduated from back in 1929. As for her crochet, it’s just one more part of a full creative life that has included everything from embroidery to china painting. She loves to stay busy and live life to the fullest. How fun!