Last week I fell in love with the crochet-filled Seventeen Evergreen music video for the song Polarity. I did some brief research then into who created the crochet for that video and discovered that it was Sarah Applebaum. I was surprised I didn’t know her name before since I spend a lot of time learning about contemporary crochet art. As I researched more, I actually realized that I’ve seen several of her crochet art pieces in the past but just didn’t know the artist who created them. Now I do.

Sarah Applebaum is a crochet artist who is actually based here in the San Francisco Bay Area which makes me even more surprised that I haven’t met this gal yet. Added to the To Do list for sure. In any case, she may be a Californian but her work has been seen worldwide in exhibitions as well as print publications.

To be more correct, Applebaum is a mixed media artist who uses a lot of fiber in her work (not specifically a crochet artist though she incorporates crochet into many pieces). I especially like this description which comes from the bio on her site:

“Applebaum’s new-psych work has played a key part in reinvigorating installation and soft sculpture through her use of textiles in contemporary art.”

Applebaum has some pieces that are entirely crochet and some pieces that are a combination of crochet and other media. In either case, her work is very colorful and uses common crochet motifs like the granny square. The “craft” of the art is very apparent in the work but then she takes that craft to the next level. What Sarah most likes to explore, according to interviews, is psychedelia and how adults can experience things the way that children do (but not necessarily with drugs, which she points out is a common misperception about the word psychedelic). In many of her works of art, Applebaum has repurposed thrift store found crochet into new creations, making an underlying statement about death and transformation.

Why I Am Drawn to Applebaum’s Crochet

I find Sarah Applebaum’s crochet work to be very visually striking. There is something about it that is slightly unnerving. I can’t pinpoint what’s creepy about her work exactly. It’s not blatantly creepy like the work of some other crochet artists such as Patricia Waller. Nevertheless, there’s something about it that catches me off guard and I am drawn to it in a weird sort of way. The best example of that unnervingness is in the music video but I see it in most of her work in one way or another. It’s fascinating and it makes me want to look twice, which I think is what good art does.

I think what especially impresses me is that her work can capture this unnerving quality while still consisting of lots of bright colors and traditional motifs. How do you make a colorful granny square seem creepy? I’m not sure but Applebaum succeeds in doing it in a way that’s aesthetically interesting and kind of thought provoking. At least, that’s how I feel about her crochet work. 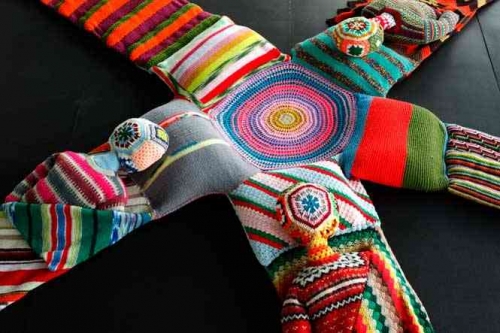 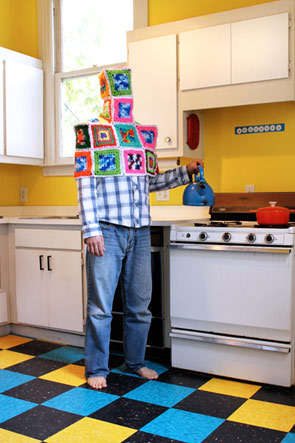 I actually remember seeing this on another site and I’m pretty sure it was What Not To Crochet, a site that’s always good for a laugh but often also leads me to fascinating crochet things that I am a little bit drawn to (like this one!) 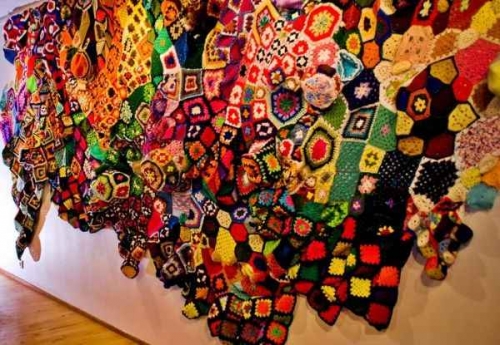 A Dazed Digital interview of Sarah describes this piece as: “a tripped-out landscape from the unfinished works of dead grandmothers all over the world, creating a deathscape or soul-map that hints at the collective consciousness via the similarity that exists in the patterning in works acquired from thrift stores everywhere.”

Sarah Applebaum Around the Web

What are your thoughts about the work of this crochet artist?