I have noticed a huge trend in cowls for men lately. I first started noticing it here and there on the crochet blogs that I read. I have to confess that I kind of dismissed this as a crochet-lovers trend and not a true fashion trend. However, I then started seeing more and more men in crochet and knit cowls in my wanderings around the city. A little more research has told me that cowls are getting popular for men. In general, I am not really loving the trend. I’ve seen a lot of guys wearing cowls that just don’t look so great on them. But the following ten sexy guys I’ve found online are making me rethink the possibilities in this trend!

This cowl is made by BessetteArt from Etsy. I don’t recognize the chunky stitch used here (do you?) but the description says that it is indeed crochet. With those piercing eyes on that hottie, I don’t really care what it is … I vote for it! And I have to say that if you’re not buying the male crochet cowl thing, check out this model showing off other designs in the same Etsy shop and see if it changes your mind.

I am especially skeptical of the idea of unisex crochet cowls. I just find cowls on women appealing and cowls on men … not so much. But this photo of a unisex cowl made to order by Etsy’s mgbdesigns has me sold!

Aw, what a cutie … and the dog is adorable too. :) This is the type of crochet cowl that I think most guys probably can’t pull off but if you get the right guy in the right setting, it totally works! It’s from Etsy’s intriguedknits.

Black is a classic color that does work for both men and women. This one is by DiNuovo. I think I’m starting to understand this men’s cowl thing.

This cowl looks super cozy, doesn’t it? I think when cowls work on guys it’s due in part to the fact that you can just see yourself snuggling up against them! The oatmeal men’s cowl is by thecattsuglybabies.

6. The Chunky Everyday Cowl in Kiwi

This guy shows that men can wear cowls in bright colors, not just neutrals, and still pull off a sexy look. Loving it! It’s by collectioncliche from Etsy and there’s more man candy … I mean crochet cowls … to look at there. 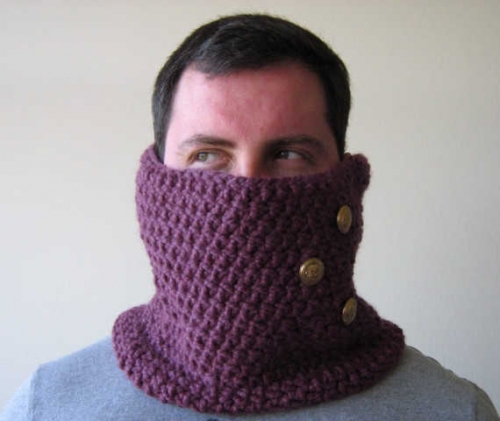 Yes, a man can even pull off a hot look wearing a purple cowl with buttons on it. And yes, I’m surprised. But clearly it’s a winner because seller smittenkittenorig had to put a note on the product’s page that the model is not for sale!

So this is one is more of a circle scarf than a cowl but they’re in the same neckwarmer family. I like this one because it uses multiple colors in the design which is unique from most men’s crochet cowls. It’s by mallorydee.

Just the name of this cowl makes it sound like it belongs to an affectionate man, doesn’t it? The fact that he’s wearing a crochet cowl while reading just adds to the sexiness. This cowl is by MelodyMaria.

We can round out this list with the cowl for him by tolduso. It’s an acrylic yarn cowl made to order in a variety of colors. We see it looking good here in grey.

So, what are your thoughts on men’s crochet cowls? Has your opinion changed at all now?