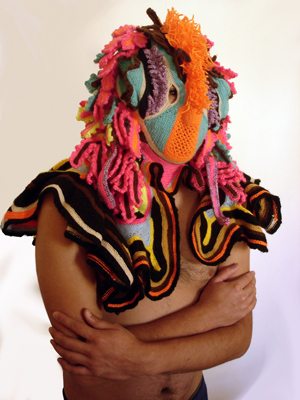 Last week my crochet artist profile was of Nick Cave, the SoundSuit artist. And although I didn’t find one in relation to the other in any way, I have to say that the work of this week’s crochet artist (Lanzini) reminds me of Cave’s work in many ways. Both of them create super colorful wearable pieces that are part art, part costume, part performance, part magic. However, there are obviously differences between the two since these are totally different artists. Lanzini typically does masks / headpieces, rather than full costumes, although he does have full wearable pieces as well. More importantly for our purposes here on the blog, he actually constructs the crochet himself whereas Cave uses found crochet pieces (along with many other found items) in his work.

Lanzini is an Italian crochet and knitwear designer who has one foot in the art world and one foot in the world of fashion. His creative colorful crochet costumed masks explore the question of self-identity in true art style and yet have been featured on the runway, notably at Missoni‘s Spring/ Summer 2011 show. He divides his time between Milan and New York, has been interviewed by Vogue Italia and had a show last year at Le Case D’Arte “where he transformed the gallery into visceral experience that amplifies the senses through visual, sonorous, tactile and olfactory elements”. (source)

Lanzini’s masks are all about identity. He doesn’t actually show himself in person, always wearing one of these masks when he’s on camera talking about his art (and I assume when he’s out showing his work as well). He says that identity is always changing, and so it makes sense that he adorns these wearable items because he can change them out. He can also grow with them. He notes in an interview with Crane.tv that he loves learning new techniques because while you learn them the pieces you are working on will change. I’ve certainly noticed that in my own crochet work – haven’t you?

“Aldo Lanzini spent the mid and late 90s making crochet dresses and costumes for his underground circuit of friends in New York City and it was here that he created his first “Illegal Alien.” A play on the fact that “alien” is the legal term describing a foreign citizen living in the United States. Calling people aliens was strange and amusing and in Lanzini’s opinion, it was a concept worth exploring, “I found it very strange that people can be defined as aliens!” – Constantin Bjerke

He says that he always starts his artwork with a small piece and he looks in the mirror and positions it on his body as he makes it, allowing his vision to expand and to determine how it’s going to grow. He always wants to stay open to allowing the piece to speak for itself as he’s working on it. He does do work other than crochet, creatures in what appear to be felt and some other items, but the bulk of his work seems to be in crochet with either yarn or thread. 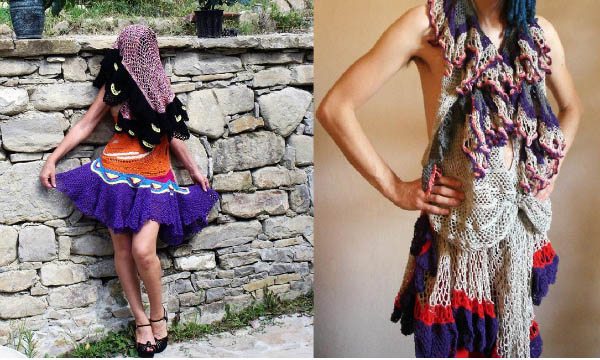 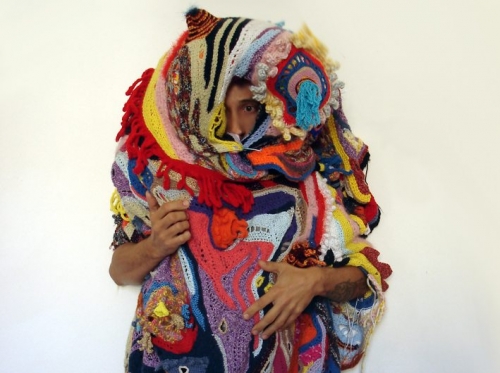 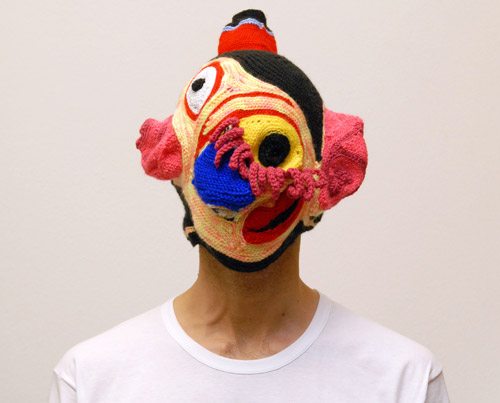 What I love about Lanzini’s crochet art

I love the amazing combination of colors and textures in wearable art pieces!