I always love doing interviews with anyone who crochets. And it’s especially a treat to get to interview anyone in the San Francisco Bay Area since I love it here and am biased and believe that this is a place filled with totally creative, wonderful people that I’d love to get to know better. So I was thrilled to get to interview Nerd JERK, who is not only a cool San Francisco gal but actually one of those rare natives of this great place. She is a video game loving crocheter who celebrates geeky things when she’s not taking care of her grandmother and being a crafty superhero. It was an honor that she took time out of her busy schedule, considering that she’s in the midst of leading the I Heart Art: San Francisco initiative right now. So here’s that interview …

CROCHETBLOGGER: If you remember, what was the first thing that you ever crocheted?

All kids think their high school is pretty lame when they’re IN high school, but I had this really rad class that taught us all these handy things I’d end up using in the future even though I didn’t know it then. Aside from screenprinting, graphic design & embroidery, I was taught how to crochet a granny square.

Not thinking much of it at the time, I didn’t pick up crochet again until I was in my 20’s and was trying to impress a boy. My first crocheted soft sculpture was a penguin, which I stayed up all night to make as a gift for a date I had the next day. His name was Penguin Seymour Hoffman.

CROCHETBLOGGER: I don’t even know which part of that story I like more! I think it’s awesome that your high school taught you some cool, useful skills. I learned fishing and backgammon in junior high but can’t say I’ve used those skills. :)

CROCHETBLOGGER: What is your favorite crochet item that you have made?

I have a thing for the colour green and for owls (which started before any awesome trends began), so I made a small pear-shaped owl out of soft sea foam green yarn with bright magenta wings last year. I wish I had kept it, but since I had a ton of craft shows to get through, some lucky person out there is cherishing him.

CROCHETBLOGGER: I adore the way you’ve combined the traditionally girly art of crochet with the traditionally male world of video games. Likewise I love how this combines the tech world with the fiber arts. Is there anything you’d like to say or share about working in a medium that combines different spheres like this?

First off – thank you so much for such a thoughtful question! It’s so awesome when people notice that! Ever since I can remember, I’ve been into video games (though I didn’t start out with Nintendo, I’m sorry to say). I have such fond memories of long hours spent button-mashing countless controllers that when someone asked me if I could make a character that gives THEM the warm fuzzies, I feel like I owe it to them to try! I also have a love for making geeks smile with all kinds of blasts from the past, so things like calculators spelling “BOOBS” come naturally.

I think a lot of people think I make great gifts for boyfriends cos only true nerds would want a Bob-Omb for their office desk. And UGO.com put that same Bob-Omb on the Top Gifts for Girlfriends List! Truth is that geekery is universally awesome. And everyone is a geek about something! I just feel so grateful to be a part of bringing that out in people all around the world. :)

CROCHETBLOGGER: Great response. Your calculator comment made me smile because I totally remember that. I think one of the best things about San Francisco is that you can easily find this great combination of craftiness and geekery.

CROCHETBLOGGER: Now for a more crafty question … What is your favorite yarn to work with? Where do you get your yarn?

My favourite yarn to work with of all time is Caron Simply Soft Yarn. I know, I know… an acrylic? Really? But it’s soft, it has a great sheen and ALWAYS comes out evenly! And when you’re doing amigurumi, even stitches are everything. I’m only bummed that they keep discontinuing key colours in my patterns – like Lemonade for my Bob-Ombs & Lumas, Green for my 1-Up mushrooms or Copper Kettle for my Goomba… NARDS! >:[

If anyone know where to get some skeins of these yarns, I’ll love you forever. :)

CROCHETBLOGGER: I have an idea brewing for where you might be able to get discontinued yarns in the future but it’s a secret in the works right now!

CROCHETBLOGGER: What made you decide to start an Etsy store for your work?

I decided to start up nerd JERK when I began feeling like I could believe in rockin’ the geek scene again. I took some of my old patterns I had made for a previous incarnation of my current business and revamped everything. I started branding and joining teams, reading tutorials on marketing and even signed up for Twitter. Since the response for my items was so overwhelmingly positive, I had to keep expanding. I hope to bring out more interesting nerdy works soon. In fact, my new Nerdy Cross-Stitch Kits can be previewed on my blog!

CROCHETBLOGGER: Well, I love what you’re doing and would like to give you an opportunity for some shameless self promotion here. Are there any particular items in your store right now that you’d like me to highlight on the blog?

A few of my best selling faves are:

CROCHETBLOGGER: For mr final question, I always ask … What is one thing about crochet that you want other people to know?

When I can watch something on Netflix for a couple of hours and come up with something rad for someone in Australia just by using a hook and some yarn, that’s some kind of awesome! I encourage people to pick up a skein of yarn & a hook of their own and see where their imagination takes them. All it takes is a few basics and some creativity.

If you like Nerd JERK, you can explore more at: 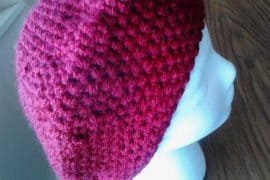 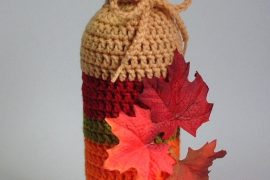 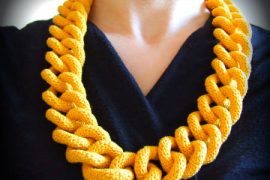