Elaine Bradford is an award-winning Houston-based urban artist who uses crochet as her main medium. She recently gained attention for her crochet artwork because she was commissioned to do an installation of her work at the Houston Public Library. Most of her work is animal life that has a crocheted sweater or crocheted skin over it but she has other tricks in her bag as well.

One of the things that makes me really love Elaine Bradford as an artist is that she takes an idea and really expands on it. For example, she is collaborating with a writer and an illustrator to create a children’s book based on the crochet art installation that she put up the Houston Public Library, expanding on the art through the book. Another thing that I love about her is that she’s truly a working artist who is working at many different levels from creating street art to serving on the boards of local arts organizations. Bradford has both a BFA and an MFA and has had been exhibiting her work in various places for more than a decade. 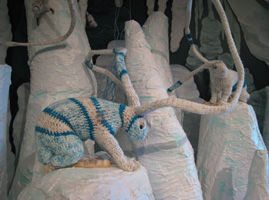 The image at the top of this post is a portion of the crochet artwork that is featured in the installation at the Houston Public Library. Basically she has filled an entire rotunda at the library with animals wearing colorful crochet skins. Here’s another image from that installation:

This is not the first time that she’s crocheted animals like this. She did similar work in 2009 for The Museum of Unnatural History: 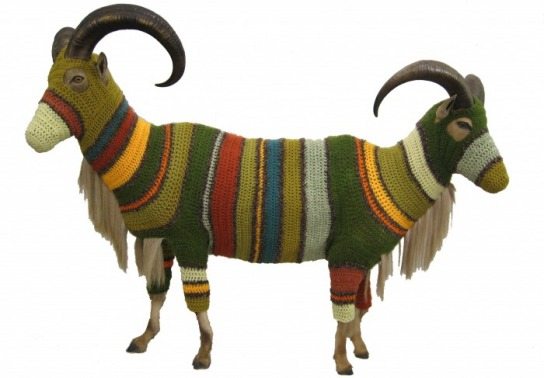 I am actually really intrigued about what her work is expanding into now. Take a look at this cool image from a 2010 project she did called Impossible Things, which was part of an artist-in-residence event: 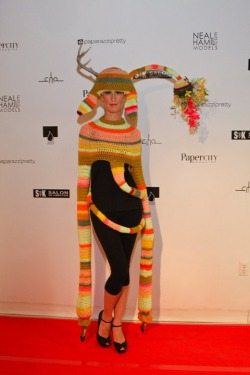 Is Elaine Bradford a Crochet Taxidermist?

Recently I profiled another crochet artist, Shauna Richardson, who is known as a “crochetdermist”, a term she coined to describe how she crochets taxidermy-style animals. One of the articles that I read about Elaine Bradford called her a crochet taxidermist as well due mostly to the work that she did for the Museum of Unnatural History. I think that term is somewhat applicable. However, because the animals are twisted away from reality in Dr. Seuss-like style, I consider them more whimsical and artsy than the term “taxidermy” really brings to mind. Then again, I’m thinking now about some of the taxidermy items that have been put together and are on display at San Francisco’s Paxton’s Gate shop … and if that’s taxidermy then I suppose this stuff could certainly be crochet taxidermy. What do you think?

A review from Bradford’s first Los Angeles solo exhibition in 2004 provides a nice little description of some of her crochet art:

“Elaine’s work consists of various objects, including trees, vacuum cleaners, and mounted deer heads, “dressed” in sweaters hand-knit by the artist, who aims to “alter these everyday objects and infuse them with both the comfortable and the surreal”, in order to “introduce the viewer to an uncanny reality that is strange, yet plausible.” The gesture is one of comfort, warmth, and absurdity, adding a humorous twist.”

Question for you
A simple question today – what do you think of crochet artist Elaine Bradford? Share your thoughts in the comments!
crochet artcrochet artistelaine bradford crochet
0
Author Kathryn