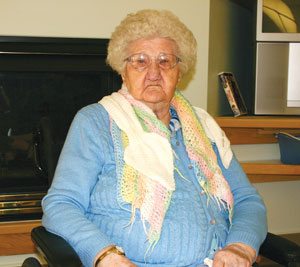 Every day I scour the web for crochet news. It’s a bit of an obsession of mine. There are many different types of crochet news but there are three types that are more common than others:

2. Crochet news about current fashions and the comeback of crochet on the runway,

3. Stories about elderly women who crochet.

This crochet news story falls into the latter category but it’s more interesting than most. That’s because most of the crochet news that I read about older women doing crochet work is about women who are in the age range of 60 – 80. Some of them are a little bit older. But none that I know of have been as elderly as Dora Ropchan who turned 106 years old today.

The Drumheller Mail wrote about this in their local news section because she is their town’s oldest resident. That’s certainly newsworthy. But what caught my attention was a line in the article that said, “she continued with her intricate crochet work, even after the age of 100.”

Crochet is pleasurable but it can be tough as well. Many people find that their carpal tunnel problems are exacerbated by crochet. Crochet requires decent vision and an ability to focus. (Although notably some people say that crochet can help with good health as they age.) As people get older, they may still crochet but they often work with chunkier yarns and bigger hooks. They don’t necessarily still do “intricate crochet work”.

How old is the oldest person you know that is still crocheting?